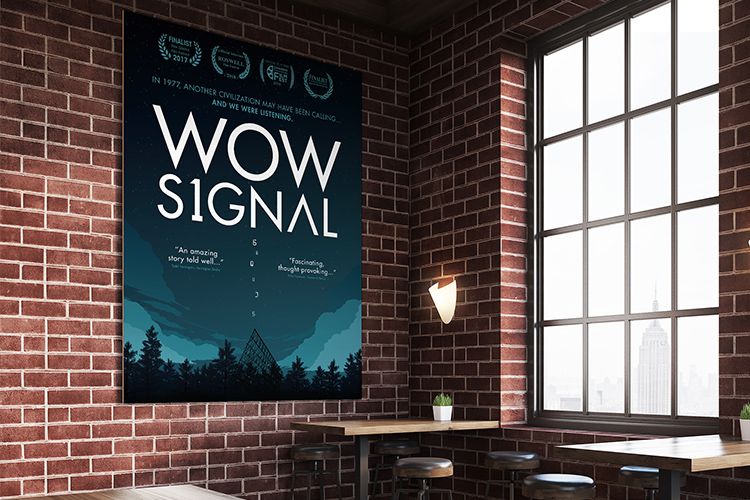 Embark On the Search for Extraterrestrial Life in Documentary ‘Wow Signal’

Listen to “E223 Embark on the Search for Extraterrestrial Life in Documentary ‘Wow Signal’” on Spreaker.

• Beginning January 21, 2020, distributor TriCoast Entertainment will release the feature length documentary “WOW SIGNAL” on streaming platforms Amazon, iTunes, FlixFling, Vimeo on Demand, and Google Play. Produced by Bob Dawson and Michael Shaw, the film documents a night in 1977 when Ohio radio telescope operators discovered a strong, interstellar signal that is said to be the world’s best evidence of communication from an extraterrestrial civilization. The resulting code of printed letters and numbers was so astounding, one of the astronomers wrote the word: ‘Wow!’ next to it, and it became the “Wow Signal”.

• While the origins of the signal remain a mystery, the documentary takes the opportunity of the Wow Signal event to explore the ongoing search for extraterrestrial intelligence by Seth Shostak at SETI, Jerry Ehman of the University of Michigan, Karen O’Neil and Michael Holstine of the National Radio Astronomy Observatory, and radio astronomer John D. Krause who designed the “Big Ear” radio telescope at Ohio State University which picked up the signal. These are folks who believe that intelligent life beyond our own exists just ‘outside our grasp’. The ramifications of proving that “we are not alone” is a strong motivation for continued research.

• Produced by ‘Next Feature Filmstory’, WOW SIGNAL comes off of a successful run through the festival circuit, winning Best U.S. Documentary Feature at the Los Angeles Theatrical Release Competition & Awards in 2018, and being recognized at the Roswell Film Festival, the Chagrin Documentary Film Festival, and the Raw Science Film Festival.

• Says the film’s director Bob Dawson, “The job of a documentary filmmaker is never to come to a conclusion. It’s always to present the evidence and let your audience decide.”

• [Editor’s Note]  It is interesting that the film’s director would say that “the job of a documentary filmmaker is never to come to a conclusion” but let your audience decide. This happens to be the very same view as mainstream astronomers such as Seth Shostak of SETI have in their ‘ongoing search’ for extraterrestrial life. The ‘Wow Signal’ is ideal for the mainstream because it offers a small bit of proof of another alien civilization out there somewhere, but no concrete evidence. This way, SETI astronomers and mainstream documentary filmmakers can keep doing what they do for a living, forever. It all remains a never-ending search, a big mystery, and a steady paycheck.

The ‘conclusion’ that they want people will take away is that our top ‘scientists’ are working diligently to find other intelligent extraterrestrial beings and civilizations. But in fact, they are doing the exact opposite. They are actively hiding the truth.

The truth is that the US shadow government has been working with extraterrestrial beings, developing highly advanced technologies, and building a secret space program ever since the Roswell crash of 1947. All of this searching by SETI through radio telescope arrays is mere misdirection to maintain this seventy-year cover-up of the true extraterrestrial presence. The real purpose of mainstream scientists and the controlled media is to reinforce the institutionalized lie that everything can be explained as weather balloons, atmospheric phenomenon, or top secret military technology, and that there is no such thing as extraterrestrials or alien UFOs.

1977, another civilization may have been calling… and we were listening.

Los Angeles, CA – Jan 6, 2020 – In a dark, wooded clearing in Ohio, a large radio telescope received a mysterious communication from deep space. Discovered days later as a code of printed letters and numbers, it became regarded as the strongest potential alien communication, branded by a single word: ‘Wow!’

WOW SIGNAL is a fascinating and thought-provoking documentary that follows the development, search, discovery and acceptance of the Wow Signal’s place in history, and its influence on future SETI (Search for Extraterrestrial Intelligence) projects and uncovers the passion of scientists who do the work through interviews of radio astronomers like

“WOW SIGNAL makes a strong case for radio astronomy and the continued search for extraterrestrial life in the universe. The notion that “we are not alone,” and its ramifications are a strong motivation for continued research. The film is educational and highly recommended for anyone interested in Astronomy and/or the universe around us here on earth,” wrote JR Martin Media.