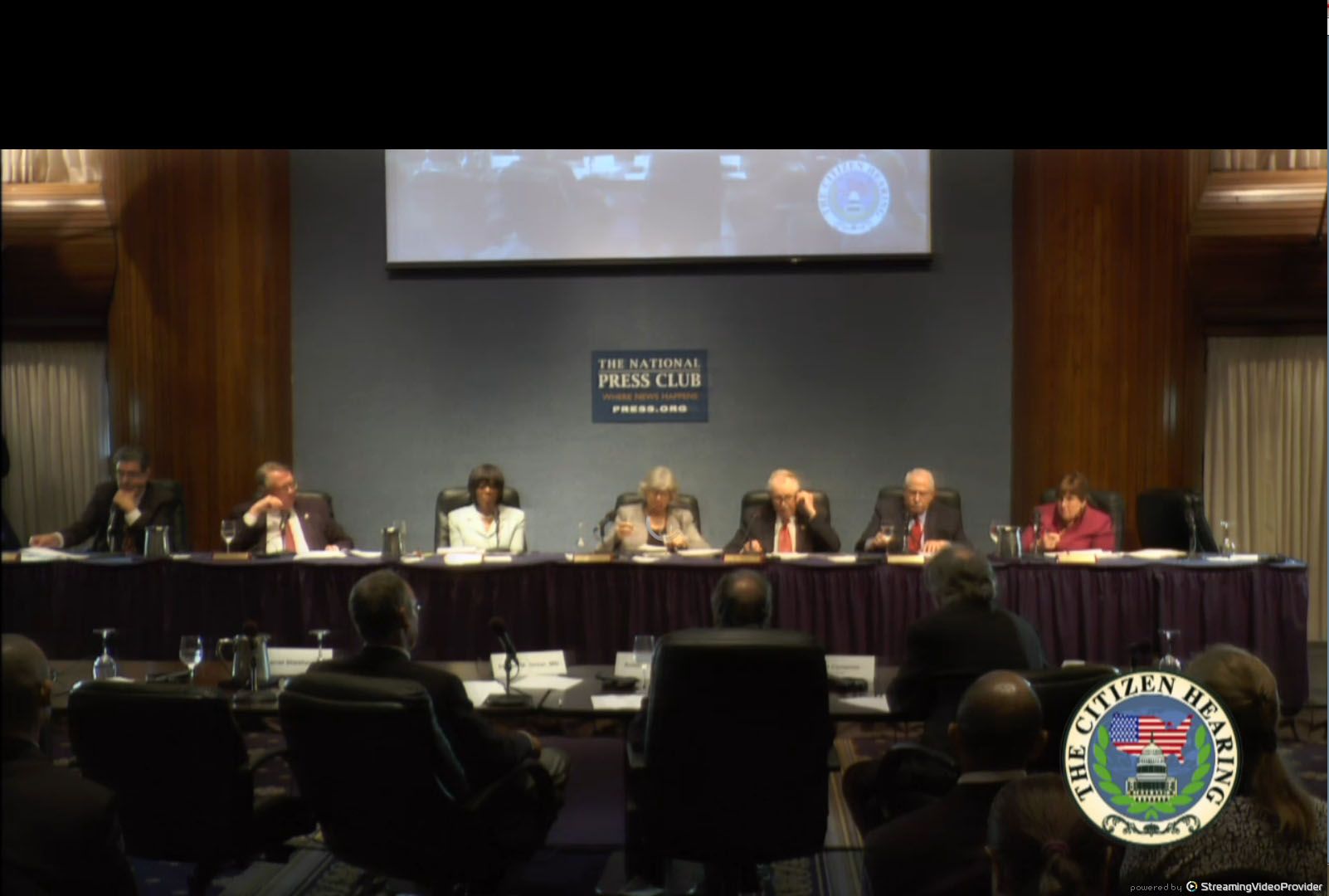 Citizen Hearing on UFO Disclosure – Will the US Congress act?

Today began the Citizen Hearing on (UFO) Disclosure at the National Press Club. Six former members of the US Congress began hearing 40 witnesses and experts reveal what they know about UFOs, and the extraterrestrial hypothesis – that some UFOs are interplanetary spacecraft. In the first two panels, four experts in each testified about the history of the UFO phenomenon and the likelihood that they are guided by an extraterrestrial intelligence. The event is being live streamed to the world. For organizer Stephen Bassett the hearings aim to stimulate the U.S. Congress to investigate the issue of UFOs, and whether they are alien in origin. The ultimate goal for Bassett is to pressure the executive branch of the US government to disclose what they know about UFOs, extraterrestrial life and technology, and lift what he calls the “government truth embargo.”

The motto for the Citizen Hearing is: “If the Congress won’t do it’s job, the people will.” The Citizen Hearing hopes to progress beyond earlier UFO disclosure related events at the National Press club – the first was in May 2001 – and get the U.S. Congress to act. Unlike earlier UFO events which were hold over a two hour period or so, the Citizen Hearing on Disclosure will last five full days. The former Congressional members will hear 30 hours of witness and expert testimony on UFOs, and the extraterrestrial hypothesis. Bassett succeeded in raising over a million dollars to fund his Citizen Hearing and related projects. Each Congressional member is being paid $20,000 which is a nice paycheck to hear people speak passionately about a topic that the former member may have had little active interest or knowledge about previously. This has led to some criticism, but so far Bassett appears vindicated insofar as the former Congress members have demonstrated keen insights into the political process and what is feasible in getting the current U.S. Congress take the UFO issue seriously.

The common element for the witnesses and experts is that the UFO phenomenon is very real, and raises profound questions about the occupants and their intentions. Are they extraterrestrials, interdimensionals, time travelers or something else? Why are they here, what are they trying to achieve by flying in our skies, and why has there been an official cover-up of this information? In the first two panels, the experts focused on the physical and documentary evidence to substantiate what they know about UFOs, and offered helpful insights into questions about the occupants of UFOs and their intentions.

The Congressional members agreed with the approach taken by the experts, and asked about the physical evidence of UFOs and whether it could be submitted for the public record. Interestingly, the role of religion came up a few times in discussions. It appeared that religion offered a means of moving forward on UFO disclosure, in the face of official political resistance. One of the experts, Daniel Sheehan, a former legal counsel to the Jesuit headquarters in Washington DC pointed out the Vatican’s interest in UFOs and extraterrestrial life. Now that we have a Jesuit Pope, Francis 1, the Vatican could play the lead role in disclosing the truth about UFOs and extraterrestrial visitation as Congressional members suggested. Indeed a recent book, Exovaticana, argues that the Catholic Church plans to do precisely this.

All the members of Congress appeared genuinely impressed by the quality of the expert testimony and the range of official documents available for public review. By lunch time of the first day, the Citizen Hearing on Disclosure already has succeeded in getting evidence of UFOs and the extraterrestrial hypothesis taken seriously, at least by former members of the U.S. Congress.