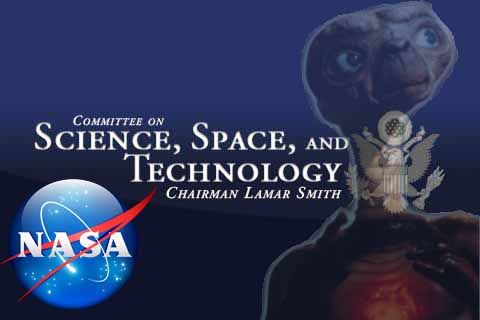 US Congress discusses extraterrestrial life, but not cover-up

On December 4, the House of Representatives Committee on Science, Space and Technology of the U.S. Congress held a session discussing the possibility of extraterrestrial life and what should be done to find space aliens. Titled: Astrobiology: The Search for Biosignatures in Our Solar System and Beyond” the session lasted 90 minutes. The meeting was chaired by Lamar Smith of Texas and featured three prominent astrobioligists from NASA, MIT and the Library of Congress. The questions asked by House members were rather general and vague, sometimes descending into the ridiculous. Rep. Ralph Hall (R-Tex) asked the panel: “Do you think there’s life out there and are they studying us — and what do they think of New York City?” Some members of the Democratic Party criticized the meetings as a waste of time. So why did the House hold this meeting at all, and why now?

The answer according to most astrobiologists is that the discovery of exoplanets makes it certain that there are millions, if not billions of earth like planets capable of hosting life in our galaxy alone. A recent statistical paper found that 22% of sun like stars may host habitable planets. Given the high unlikelihood that so much cosmic real estate would be devoid of life that has shown itself to be so robust on Earth, astrobiologists have basically reached a consensus that it is a only a matter of time before alien life is found. This was the observation of Bill Posey, Republican of Florida who said: “You’ve pretty much indicated [the discovery of] life on other planets is inevitable…. It’s just a matter of time and funding.” Posey and other members acknowledged that there needs to be more funding for NASA to build better space telescopes to find exoplanets and support detection programs like SETI to find intelligent alien life out there. Dr Stephen Dick from the Library of Congress challenged the current separation between detecting microbiological and intelligent extraterrestrial life, and called for a renewal of funding for SETI:

In addition to a renewed search with the latest technology, the reinstatement of funding for SETI would allow a systematic examination of these intriguing questions. It would also repair the artificial programmatic divorce between the search for microbial and intelligent life, which, despite engaging different scientific communities, are part of the same research problem. And I believe SETI would be supported by the public, which as always is interested in life beyond Earth, whether microbial or intelligent.

Earlier in May a subcommittee of the House Science Committee heard evidence of the latest astronomical findings concerning exoplanets, and the need to continue funding such research. There are many congressional members sympathetic to NASA and its budgetary needs despite the strict fiscal conservatism of the Republican Party that has led to cut backs in NASA funding. The White House has submitted a budget for NASA of $17.7billion for 2014, which is a slight decrease from 2012. It is not certain that NASA will even get this which is a worry to its supporters.

This latest Congressional meeting comes roughly seven months after a mock congressional hearing involving six former members of Congress. The Citizen Hearings on Disclosure examined evidence of a UFO cover-up and that we are being visited by various extraterrestrial civilizations. The former congressional members did not think it likely that the current Congress would take up any time soon the issue of extraterrestrial life, or at least claims of a cover-up. Yet here we are seven months later and Congress has indeed begun openly discussing extraterrestrial life, though not evidence of a cover-up.

Curiously, current members of the U.S. Congress are open to discussing extraterrestrial life in the context of the latest astronomical data provided by NASA, yet won’t hear from former NASA employees and astronauts about what they know of a cover-up. Apollo 14 astronaut Dr Edgar Mitchell, for example, has been very prominent in speaking out about the cover-up for over a decade. Indeed he testified by live video before the Citizen Disclosure Hearing. Yet don’t expect the House Committee to call upon Dr Mitchell soon to testify. The official stance seems to be that discussion of extraterrestrial life is now fine as long as it’s done in the context of NASA’s discoveries of exoplanets, but don’t discuss the possibility of a cover up by NASA employees and others. That way NASA can get funds for more efforts to find alien life somewhere in deep space, while ridiculing those claiming that NASA has already discovered ET much closer to home.