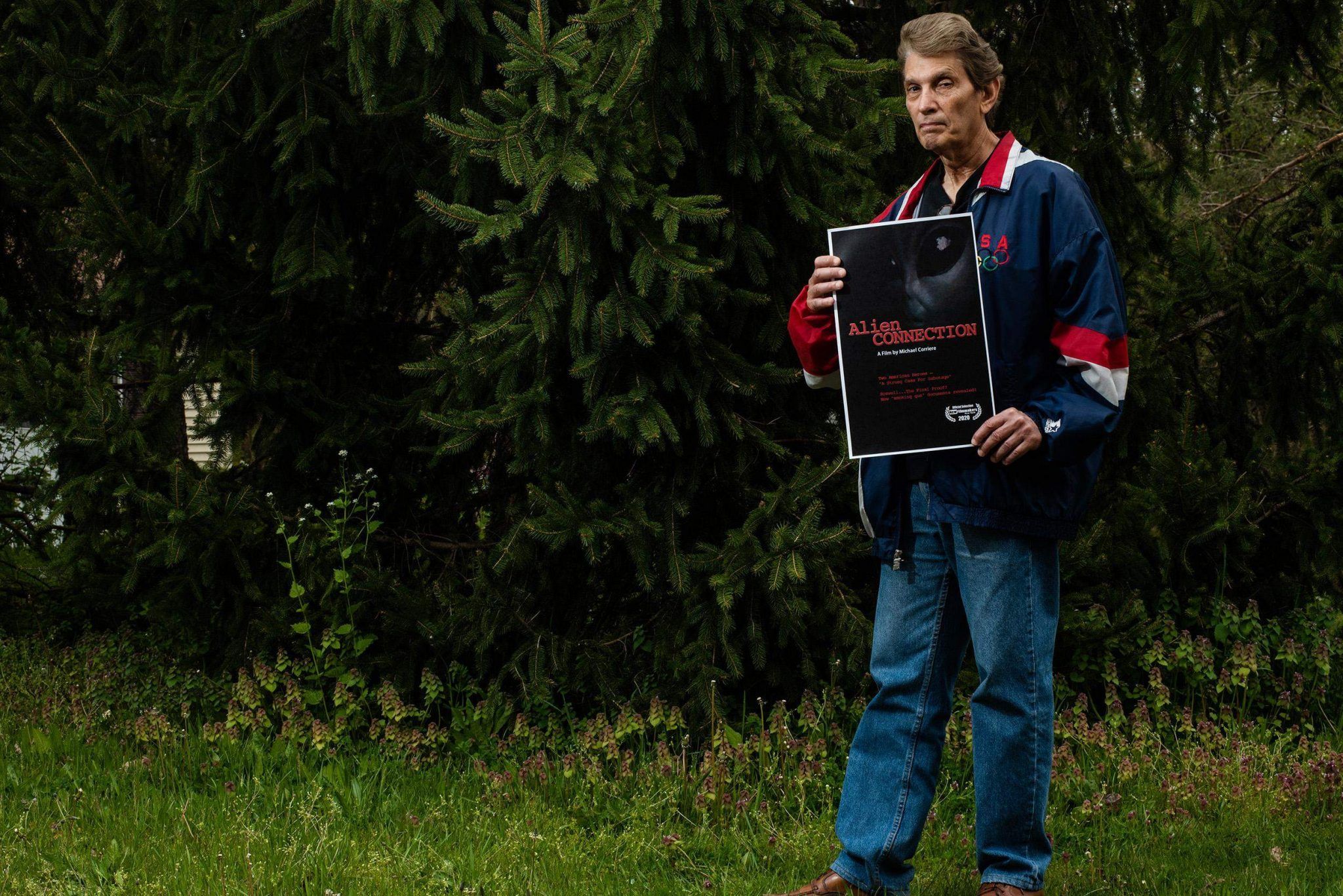 • In spite of watching three mysterious lights coming towards him and then disappearing behind the Moon when he was a ten-year old in the Bronx, and then seeing a 300-foot rectangular-shaped object in the daytime sky over Montgomery ten years ago, filmmaker and playwright Michael Corriere, 72, (pictured above) of Montgomery, NY, (a northern suburb of New York City) has always been more a skeptic when it comes to UFOs and extraterrestrial beings.

• Then the retired New York City police officer “started looking into” three UFO incidents that all occurred in 1947, including Roswell, the Puget Sound incident, and the Mt Rainier ‘saucers’. On May 13th, Corriere premier for his new film, “Alien Connection…the Final Proof…the Final X-File,” online as part of the New Filmmakers New York Festival, where he dramatizes these UFO incidents and makes the case that the US government has actively covered them up from the public.

• On June 21 1947, two men who were on harbor patrol in the Puget Sound in Washington State saw six doughnut shaped objects in the sky, one of them dumping slag fragments into the water, with some of them landing in their boat. (e.g.: ‘The Maury Island Incident’) Two Army Air Corps officers were dispatched from California to investigate the UFO fragments. Their B-25 bomber crashed due to “engine failure”, killing the officers. The engines were brand new, and the ID numbers on a photo of the crashed plane were different than the numbers in the official crash report.

• “There was so much evidence found,” says Corriere. “But all the reports from local police departments disappeared.” Corriere suspects one of the biggest cover-ups in history going all the way up to the President, Harry Truman. Corriere has asked the United Nations Human Rights Commission to investigate the Puget Sound “crash,” and has also written President Trump about it.

• Finally, on July 8, 1947, the front-page headline of the Roswell, NM Daily Record newspaper blared: “Roswell Army Air Force Captures Flying Saucer on Ranch.″ The government immediately changed its story saying that it was a high altitude weather balloon. Then they said it was a high altitude nuclear blast detector. According to an email that Corriere received from Wright-Patterson Air Force Base in Ohio, their records show that President Truman visited the AF base “sometime in September, 1947.” This is where the ‘alien bodies’ from Roswell were allegedly kept, says Corriere.

UFOs seemed like they were everywhere in the summer of 1947.

The same month, two men who said they were on harbor patrol in the Puget Sound in Washington State claimed they not only saw six doughnut shaped objects in the sky, they said fragments of them landed on their boat.

In July, a private pilot also in Washington reported seeing nine saucer-shaped UFOs as he flew past Mount Rainier.

It was against this backdrop that two Army Air Corps officers, Capt. William Davidson and Lt. Frank Brown, were sent to Washington to investigate and, reports say, collect the so-called UFO fragments.

They never made it back to their California base. Their B-25 bomber crashed, killing the officers.

Was it engine failure, as the official reports claimed, or was it something else, like sabotage?

Not only does he say that the engines were unlikely to fail because they’d just been installed, the ID numbers on a photo of the crashed plane were different than the numbers in the official reports of the crash.

That incident is just one aspect of what Corriere, 72, claims could be one of the biggest coverups in UFO history – a “major coverup″ that, he says, reached all the way to President Harry Truman. Corriere has even asked the United Nations Human Rights Commission to investigate the “crash,” along with writing President Trump about it.

“There was so much evidence found,” Corriere says. “But all the reports from local police departments disappeared.”