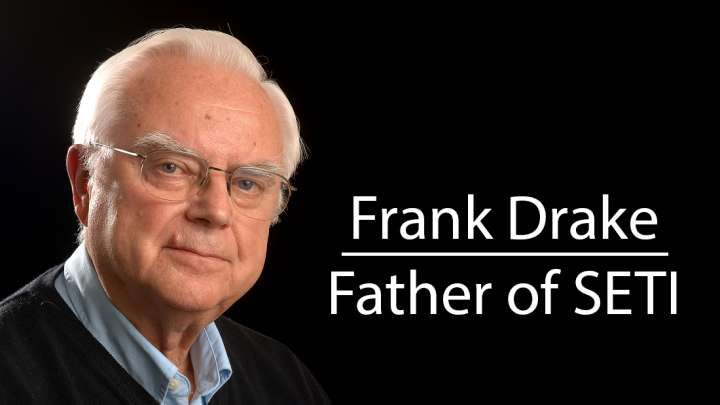 My Dad Launched the Quest to Find Alien Intelligence

• In the spring of 1960, with a budget of less then $2,000 and access to an 85-foot radio telescope in Green Bank, West Virginia, a 29-year-old astronomer named Frank Drake set out to look for signs of intelligent alien life beyond Earth. For three months, the telescope scanned its targets and found nothing more than cosmic static.

• Back in the 1960s, astronomers knew of no worlds beyond our solar system. But Drake reasoned that other worlds might be populated by civilizations advanced enough to broadcast their presence to the cosmos, as we on Earth had been doing for decades. “Searching for intelligent life was considered bad science in those days,” says Drake, who just turned 90 years old.

• So Drake designed an experiment called Project Ozma, after the princess in L. Frank Baum’s Oz series. Even though Ozma failed to find evidence of extraterrestrial technologies, the project was the first step toward solving a monumental mystery. In 1961, the National Academy of Sciences asked Drake to convene a meeting at Green Bank to further discuss the search for intelligent life. While organizing that meeting, he casually came up with the now-famous ‘Drake Equation’, a framework for estimating how many civilizations might be detectable in the Milky Way galaxy.

• Project Ozma was transformed into the Search for Extraterrestrial Intelligence, or ‘SETI’. “There were radio astronomers all over the place who wanted to do SETI searches,” says Drake. But SETI projects in the US, Australia and Europe failed to gain ground. “It still had this problem of being considered flaky stuff.”

• In the Soviet Union, however, astronomers learned of Ozma and eagerly started scanning stars for signs of life. “There were far fewer restrictions on what Soviet scientists could do. They had kind of steady budgets because of the way the centralized communist government worked. They could kind of do whatever they wanted,” said science historian Rebecca Charbonneau of the University of Cambridge.

• The Soviets and Americans would meet to exchange ideas about searching for intelligent life. While the Cold War raged, U.S. and Soviet astronomers worked congenially in competition to first detect extraterrestrial life. After the fall of the Soviet Union, the relationship morphed into friendship within a global community.

• SETI had been funded by NASA. But by the 1990s, Congress began to cut federal funding for SETI projects, calling it “Martian hunting” and a waste of taxpayer dollars. The nonprofit SETI Institute, founded in 1984 at the University of California, Berkeley, was on its own.

• But in 1995, astronomers discovered the first ‘exoplanet’ outside of our own solar system. It was a Jupiter-like world, called 51 Pegasi b, orbiting a sun-like star. But it was considered inhospitable for life as we know it. Since then, astronomers have discovered thousands of exoplanets with many having conditions favorable to life. We’ve learned that planets vastly outnumber stars in the Milky Way, providing billions of places for intelligent alien civilizations to exist.

• In 2015, a 10-year, $86 million project called Breakthrough Listen was funded by Silicon Valley tech investor Yuri Milner to harnesses the world’s sharpest radio telescopes, such as the Green Bank Telescope in West Virginia and the Parkes Observatory in Australia, to search the nearest million stars for signs of extraterrestrial intelligence. Now, halfway through its tenure, it has yet to find any. It will soon add to its search the MeerKAT array of radio dishes in South Africa.

• Astronomers have expanded their search parameters beyond interstellar radio signals. They now also look for optical pulses, waste heat generated by powerful civilizations, and any other signs known as ‘technosignatures’. One of these projects is called PANOSETI, designed to scan the entire sky for fleeting but intense flashes of optical and infrared light. Led by Shelley Wright, an astronomer at the University of California, San Diego, the project will capture information about transient astronomical phenomena such as supernovae —and, just maybe, artificial transmissions.

• Today, some say that SETI is in the midst of a renaissance. Large projects are kicking off, funds are materializing, and astronomy courses now include a broader perspective on humanity’s place in the universe. If SETI can maintain its current momentum, astronomers are optimistic that future projects could be even more ambitious – maybe even installing a radio telescope on the far side of the Moon, the only place in the solar system where Earth’s constant transmissions don’t overwhelm radio signals from the cosmos.

• SETI astronomers believe that they may soon discover another extraterrestrial civilization. Or we may be the only active civilization at this moment in time. Other civilizations may have risen and fallen during the 13.8-billion-year history of the universe. It make take a few million more years for nascent lifeforms on exoplanets to evolve complex metabolisms and technological intelligence.

• In any case, the answer to Frank Drake’s question of “where are the extraterrestrials” has the potential to change the course of humanity’s future. Drake says that he didn’t anticipate how captivating the search would be, or how SETI would grow into the enterprise it is today, although it still hasn’t completely shed the “giggle factor”. Public funding is difficult. The field has relatively few dedicated practitioners, and it has yet to fully infiltrate the halls of academia. But momentum is gathering.

• [Editor’s Note]   I have no doubt that Frank Drake was sincere in his initial Ozma quest to detect errant radio signals from space to try to discover other intelligent civilizations in the galaxy. Likewise, Frank’s daughter Nadia has every reason to be proud of her father. But just like the rest of us, the Drakes and other honest astronomers have been obstructed by the deep state. While from the 60s to the 80s, the deep state allowed NASA funding of SETI efforts, they knew that technology embargo and the ‘giggle factor’ which the deep state had imposed on the scientific community would prevent SETI from finding anything or being taken seriously. By the 1990s, conventional technology was rapidly developing, so the deep state government cut off funding and infiltrated these programs with counter-productive deep state operatives. Those who now run SETI are only interested in using the project for disinformation purposes – to satisfy the public that smart people are working diligently but fruitlessly to discover evidence of another intelligent civilization in our galaxy, because these extraterrestrial beings simply don’t exist. In reality, intelligent extraterrestrial worlds permeate this galaxy and the entire universe. The elite deep state hierarchy has secretly been working with these extraterrestrials since World War II. During the past seventy years, they have developed a handful of secret space programs, including bases and colonies on the Moon, on Mars, and on celestial bodies throughout the solar system and beyond. As Richard Dolan famously put it, our shadow government has created a ‘breakaway civilization’, concealed from the people on Earth who serve as unwitting slaves to generate an industrial economy for these elite ‘puppet masters’ to utilize for their own purposes, which excludes the rest of us.

In the spring of 1960, a 29-year-old astronomer with streaks of preternaturally white hair and a devil-may-care attitude set out to tackle one of humanity’s most existential questions: Are we alone in the universe?

Frank Drake, then an astronomer at the National Radio Astronomy Observatory, was gearing up to search for radio whispers from faraway civilizations that might be sailing the cosmic sea. For such a grand quest, he had a budget of £1,600 and access to a radio telescope thought to be sensitive enough to detect transmissions from any potentially broadcasting extraterrestrials.

“Searching for intelligent life was considered bad science in those days,” says Drake, who just turned 90 years old—and is better known to me as Dad.
At the time, looking for evidence of alien technologies was still squarely in the camp of schlocky science fiction. But for my dad, it was worth taking a risk to find out if the cosmos is as richly populated as Earth’s teeming oceans—or if humanity is adrift in a profoundly quiet interstellar expanse.

Humble and curious, with a knack for quiet mischief, Dad is committed to his science, still writing research papers and serving on committees. My early memories are full of trips to observatories and conferences, and the singular pleasure of staring through telescopes at the twinkling sky. I was never bitten by the academic astronomy bug, though.

It wasn’t until I began working as a science journalist that I realised just how risky and revolutionary Dad’s early work really was.

Astronomers knew of no worlds beyond our solar system back in the 1960s, but Drake reasoned that if planets like Earth orbited stars like the sun, then those worlds might be populated by civilisations advanced enough to broadcast their presence to the cosmos. His logic made sense: For the last century, Earthlings have been making these sorts of announcements all the time in the form of TV and radio broadcasts, military radar, and other communications that leak into space.

So he designed an experiment to search for signals coming from worlds that could be orbiting the nearby stars Epsilon Eridani and Tau Ceti. He named the experiment Project Ozma, after the princess in L. Frank Baum’s Oz series—an homage to an adventure tale populated by exotic and unearthly beings.

Before sunrise on April 8, 1960, Drake climbed an 85-foot radio telescope in Green Bank, West Virginia, jammed himself inside a trash-can-size piece of equipment, and launched humanity’s first scientific search for extraterrestrial intelligence—now known as SETI. For three months the telescope scanned its targets and found nothing more than cosmic static. The stars were stubbornly quiet.

“That was a disappointment,” Dad told me a few years ago. “We’d hoped that, in fact, there were radio-transmitting civilisations around almost every star.”