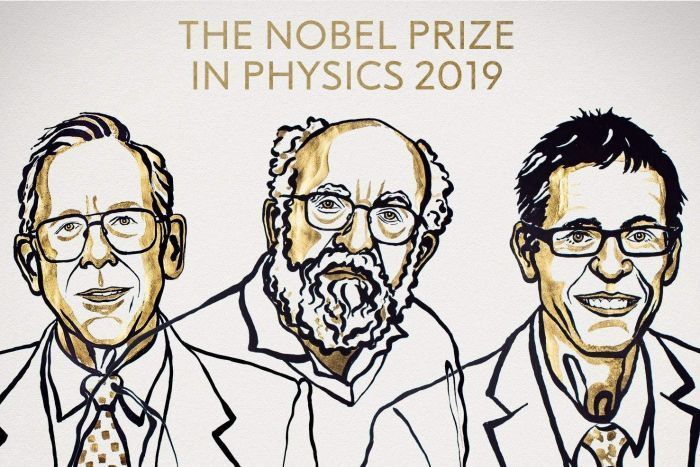 Listen to “E129 10-17-19 Nobel Prize in Physics Awarded for Research on Exoplanets and the Structure of the Universe” on Spreaker.

• On October 8th, the Nobel Prize in physics was awarded jointly to James Peebles of Princeton University who theorized the existence of ‘dark matter’ and ‘dark energy’ to explain what makes up the 95 percent of the universe that we do not yet understand, and Michel Mayor along with Didier Queloz of the University of Geneva who in 1995 discovered the first extra-solar ‘exoplanet’ orbiting around a sun-like star.

• When astronomers stumbled upon a cosmic radiation that suffuses throughout space, fifty years ago, it provided a road map of the history of the universe since the “Big Bang”. In short, in one-millionth of a second, “lumps” of matter were created which would evolve into galaxies.

• Crediting the research of his contemporary Soviet astronomers in the 1960s, Peebles theorized that something must exist – an invisible force – that drives the expansion of the universe while holding the galaxies together. Yet everything ever detected by a scientific instrument and everything that has yet to be found makes up only 5 percent of the universe. Thus dark matter/dark energy was born to fill the void. However some argue that it was Carnegie Institution astronomer Vera Rubin who proved the existence of dark matter but was never credited with an award.

• Mayor and Queloz are credited with finding the first exoplanet outside of our solar system in 1995. They did this by measuring the wobble in a distant star by the shifts in light it emitted. From this they could determine the size and distance of a companion planet, both orbiting a common center of mass. The planet they found, dubbed 51 Pegasi b, is large, gaseous and hot like Jupiter, but is so close to its star that it takes just four days to complete an orbit. Queloz was a graduate student working with Mayor, a Professor Emeritus.

• “New science is very rarely done by just one person … and there were a lot people who made important contributions before and since then,” said Johanna Teske, an exoplanet astronomer at Carnegie Observatories. But Mayor and Queloz’s discovery “was really a turning point for the field.” Once the method was devised, astronomers across the globe were looking for the telltale wobble of a planet-hosting sun. Over 4,000 exoplanets have been found to date.

• Nobel Committee member Ulf Danielsson noted that ‘somewhere in the vast and inscrutable universe, on one of those strange and distant worlds, it’s possible that some other form of life exists’. “Our view of our place in the universe will never be the same again.” It might take years, or centuries, or even millennia, Danielsson said. But he holds out hope that one day humanity will find evidence that we are not alone.

A cosmologist who revealed that the universe was made mostly of invisible matter and energy, and two scientists who detected the first planet orbiting an alien star, were jointly awarded the 2019 Nobel Prize in physics Tuesday.

By studying the earliest moments after the birth of the universe, James Peebles of Princeton University developed a theoretical framework for the evolution of the cosmos that led to the understanding of dark energy and dark matter — substances that can’t be observed by any scientific instruments but nonetheless make up 95 percent of the universe.

Fellow laureates Michel Mayor and Didier Queloz of the University of Geneva revolutionized astronomy, the Nobel Committee said, when in 1995 they announced the discovery of a large, gaseous world circling a star 50 light-years from our sun — the first extrasolar planet found around a sun-like star. In the decades since, scientists have detected thousands more of these exoplanets, and astronomers now think our universe contains more planets than stars.

“This year’s Nobel laureates in physics have painted a picture of a universe far stranger and more wonderful than we ever could have imagined,” Ulf Danielsson, a Nobel Committee member, said at a news conference Tuesday. “Our view of our place in the universe will never be the same again.”

For almost a century, scientists have theorized that the universe began with a big bang, growing from a hot, dense particle soup into the current collection of dust, stars and galaxies flung across a vast and still-expanding space. Fifty years ago, a pair of radio astronomers stumbled upon the signature of those earliest days of expansion: the cosmic microwave background, a faint form of radiation that suffuses the entire sky.

This radiation is a “gold mine” for physicists, the Nobel Committee said. By analyzing tiny variations in this ancient afterglow, scientists can peer back in time to understand how the universe evolved. Peebles studied the temperature of the cosmic microwave background to understand the matter that was created in the big bang.

“It was, conceptually, a door-opening event,” said observational cosmologist Sandra Faber, a staff member at University of California Observatories. “It showed that known laws of physics could explain the universe when it was only 100 seconds old. Isn’t that amazing?”