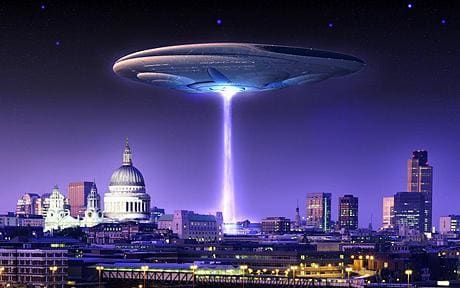 Humans Would Be Cool with Finding Aliens

• A study of 501 people by Arizona State University psychologist Michael Varnum shows that people typically respond quite positively to the notion of microbial life on other planets.

• Past polls show that more than half of Americans, British and Germans believe intelligent extraterrestrial civilizations exist. Thirty percent believe that intelligent aliens have contacted Earth, but that the government has covered it up.

• “I think there might be something sort of comforting about knowing that life wasn’t an accident that happened once here,” he said. “Maybe it makes us feel a little less fragile or a little less lonely in the expanse of space” said Varnum.

If extraterrestrial life is ever discovered, humanity would probably be pretty cool with it.

A new study, one of very few of its kind, finds that people typically respond quite positively to the notion of life on other planets. The study investigated the possibility of finding microbial extraterrestrials, not intelligent E.T.s, so people’s responses might be a little different if they were told an armada of aliens were headed toward Earth, cautioned study author Michael Varnum, a psychologist at Arizona State University. Nevertheless, he noted, large portions of people believe that intelligent aliens do exist and that they’ve visited Earth; so even a more dramatic announcement might not ruffle feathers.

“What this suggests is, there’s no reason to be afraid” of sharing news of astrobiology with the public, Varnum told Live Science. “We won’t collapse. We’re not going to have chaos in the streets.”

How people would respond to finding they’re not alone in the universe is a perennial question, but one that has been the subject of far more speculation than study, Varnum said. He could find only one study that asked people how they thought they’d react to the announcement of extraterrestrial life, and it was a decade old.

Varnum wanted to tackle the question a bit more realistically. So he turned to the real-world news, analyzing articles dating back to 1967 that looked at discoveries that could potentially have hinted at alien life (including — full disclosure — articles by Live Science’s sister site Space.com on a star with irregular brightness cycles that might have signaled extraterrestrial activity, but the irregular cycles more likely result from orbiting dust).

Most of the language in these pieces skewed positive, software analyses revealed, and writers tended to emphasize the potential rewards of discovery over potential risks. Armed with that knowledge, Varnum turned to real people. He first recruited 501 subjects on Amazon’s Mechanical Turk crowd-sourcing website, paying them a small fee to write responses to two questions. One was how they would feel if scientists announced the discovery of alien microbial life. The other was how they thought the public at large would respond to such an announcement.

“It’s really much more likely that we’re going to encounter strange germs rather than E.T.,” Varnum said. And no one has previously studied people’s attitudes toward the discovery of alien microbes.
In a second study, Varnum recruited Mechanical Turk participants again. This time, they read a real-life article about the possibility of alien microbes. In 1996, scientists announced that they’d found what might be fossilized microbes in a Martian meteorite, known as Allan Hills 84001. Today, the researchers behind that discovery still think they may have found telltale signs of ancient alien life, though people in the field as a whole are far from convinced. At any rate, contemporary news articles about the discovery were very positive, Varnum said. He lifted one from The New York Times, stripped it of information about the date, and presented it to 256 participants as a new article. As a control group, he asked 249 other participants to read a real article about the creation of synthetic life in the laboratory.

In both studies, people reacted to the idea of alien life with more positivity than negativity, Varnum found. They tended to focus on the rewards over the risks. Individuals in the first study felt they, personally, would respond to the announcement of microbial E.T.s with a little more positivity than the public at large, but they still thought humanity as a whole would be enthused.