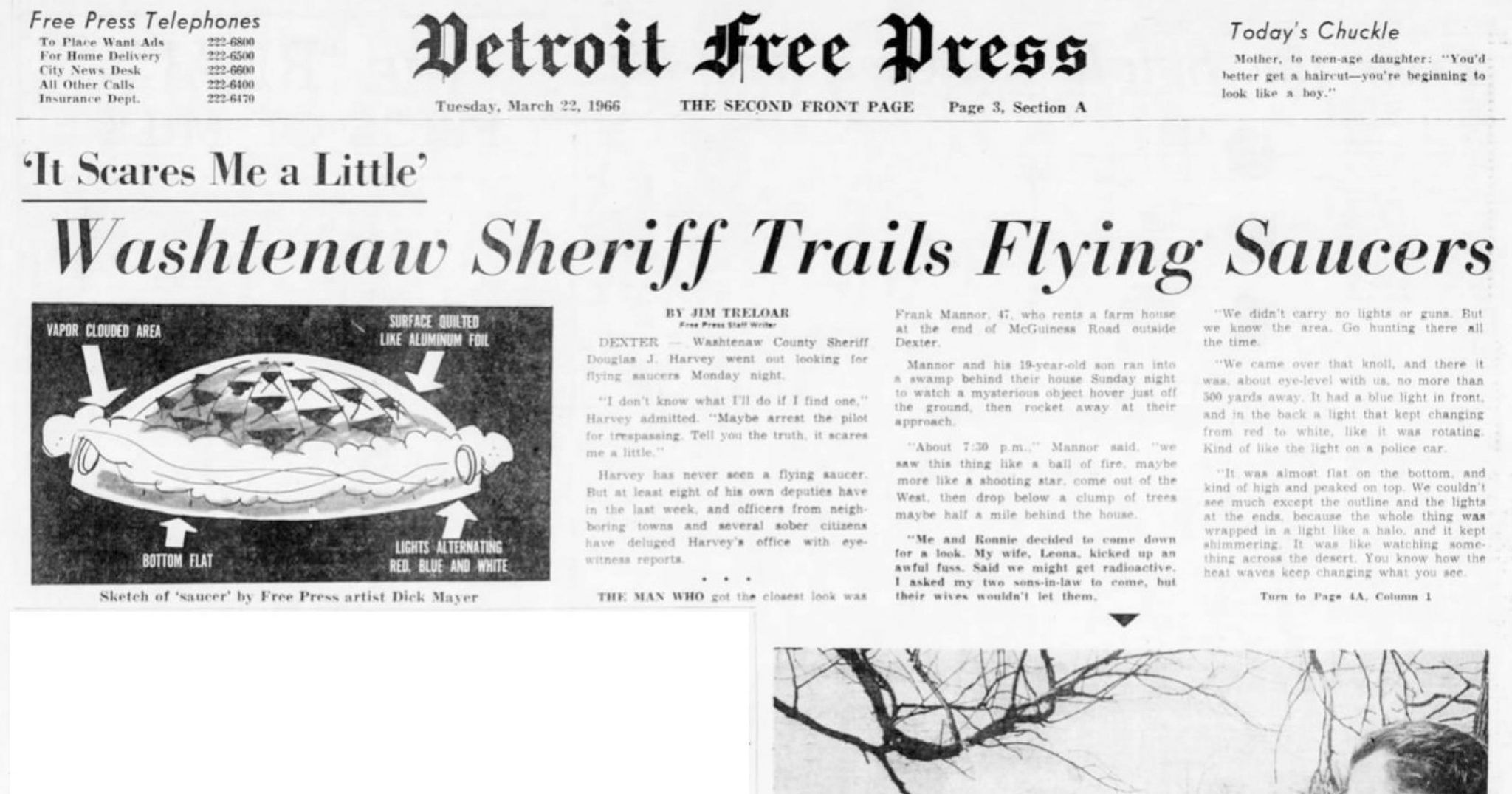 Listen to “E145 Dexter’s UFO Incident and Hysteria” on Spreaker.

• In the late evening of March 20, 1966, Frank Mannor and his son Ronald watched a pyramid-shaped UFO craft hover over their farm in Dexter, Michigan. The body of the craft was a porous-looking yellowish rock. Frank described a blue-green light on the right side of it, and a white light on the left side. No antenna or porthole. “We got to about 500 yards of the thing,” Mannor told reporters. “You couldn’t see it too good because it was surrounded with heat waves, like you see on the desert.”

• The Washtenaw County Sheriff’s report listed up to 60 witnesses that watched the UFO for a half hour, including 12 policemen, from a distance of only 1,500 feet. The consensus described it as a brown luminous car-sized object with a “scaly” or “waffled” surface, cone-shaped on top and flat or oval on the bottom. It had two bluish-green lights on right and left edges that turned bright red to illuminate the object.

• At one point the whole object lit up with a yellowish glow while rising 500 ft, and then descended again. When the witnesses saw a couple of flashlights in the distance, the object seemed to respond by flying away at high speed directly over the witnesses with a whistling sound like a rifle bullet ricocheting.

• The press pounced on the story and suddenly there were sightings throughout the Midwestern states with UFO reports as far away as Kansas. Dismissed at first as a hoax or mass delusion, the government finally sent in Dr. J Allen Hynek, an astronomer from Northwestern University to investigate the matter. Hynek arrived in Dexter and found what he later described as “near hysteria.”

• The mid-1960s were the days of black and white television shows such as “Lost in Space” and “My Favorite Martian”, and movies like “Invasion of the Body Snatchers” and “The Day the Earth Stood Still”. The public had been primed for this moment. UFO and alien mania were sweeping across the country. At nearby University of Michigan students laughed it off and played alien pranks.

• Doug Harvey, who was the Washtenaw County Sheriff at the time, recalls Hynek coming the sheriff’s office to introduce himself. Hynek told him, “’I’m from Washington and I’ve come down (here) to inspect that site about the UFO.’ So I drove him out there and he looked at it and talked to the Mannors. He got back in the car and I said, ‘What do you think?’ He said, ‘You know, I really don’t know. I really don’t know. Something was there.’”

• Sheriff Harvey says that, “As soon as we got back to the jail, (Hynek) had a call from Washington.” Hynek then used Harvey’s office to address the press. Hynek announced, “We have definitely discovered that it was swamp gas.” “And that’s where it died,” says Harvey. Everybody went home.

• Of the 78 UFO sightings reported in Michigan to the National UFO Reporting Center so far in 2019, one was in Dexter. In the late evening of August 1, 2019, a Dexter resident reported seeing a bright and pulsing amber light hovering above his garage for a few minutes. It also had two smaller blinking red lights. “It was too big to be a plane,” said the witness. Then it suddenly took off over (his) house and into the distance, making a sound similar to a low-flying plane. “[B]ut it was very much not a plane.”

• There are more sightings reported now than ever before, but the public has been desensitized to it. We’ve been hearing stories of UFO encounters for seventy years. At some point you give up and move on. People aren’t frightened of UFOs. It is simply that nobody takes them seriously or gives them a second thought unless it is especially compelling. We’ve traded hysteria for ambivalence.

There was a UFO incident in Dexter in 1966 that sparked a national panic over an imminent alien invasion. The event was the climax of a hysteria that had been mounting for decades. Once over, fear of UFOs faded, making room for other national worries. However, UFO sightings continue to this day in Washtenaw County and around the state, but nobody gives them a second thought or even a first.

“We got a call that the Mannors out in Dexter seen a UFO,” says Doug Harvey who was the Washtenaw County Sheriff at the time. “So I went out there and the grass was down flat in a round circle…and they said they definitely seen an object come down and lift off.”

UFO hysteria first began in the late 1940s. It coincided and was quite probably fueled by the start of the Cold War and its paranoia as well as the emergence of the Golden Age of Television and its entertainment. By the mid-1960s, the collective American imagination was fertile for end-of-the-world scenarios, either manmade or alien.

But what has happened since then? Fifty years later, we’re not scared anymore. And except for a few over-cooked and half-baked UFOlogists storming Area 51 in the Nevada desert, we’re not taking the idea of visiting extraterrestrials seriously anymore. The whole idea is a thing of fiction, for entertainment purposes only.

It all started out of nowhere late one evening in 1966. Right at the moment when the earth was at its Spring Equinox as if in response to the University of Michigan’s advanced radio telescope probing space the final frontier on nearby Peach Mountain, strange but colorful lights suddenly appeared over a family farm in Dexter Township.

The owner, Frank Mannor, along with his son Ronald, ran after the strange, hovering craft over his wooded swamp. Oh to have been there with a smartphone.

“We got to about 500 yards of the thing,” Frank later told reporters. “It was sort of shaped like a pyramid, with a blue-green light on the right-hand side and on the left, a white light. I didn’t see no antenna or porthole. The body was like a yellowish coral rock and looked like it had holes in it—sort of like if you took a piece of cardboard box and split it open. You couldn’t see it too good because it was surrounded with heat waves, like you see on the desert. The white light turned to a blood red as we got close to it and Ron (his son) said, ‘Look at that horrible thing.’”