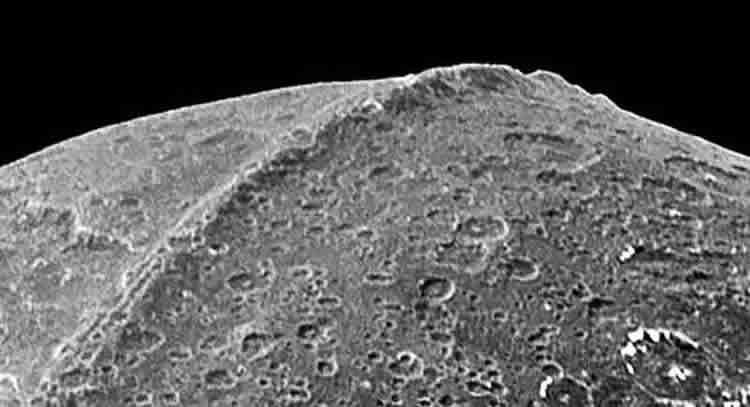 • Iapetus – Iapetus is a moon of Saturn that was discovered by Italian astronomer Giovaccini Domenico Cassini in 1671. What is so interesting about Iapetus is that there is a mountain-like ridge running around the moon’s equator that measures up to 20 kilometres tall, twice the size of Mt Everest, and approximately 200 kilometres thick. (Iapetus is pictured above)  It is actually the tallest mountain range in our entire Solar System. But the rest of the moon is flat. This would indicate that it is artificially constructed. A lot of prominent researchers and scientists say that the Earth’s Moon is also artificially constructed. Of course, they’re generally ignored by the mainstream. But most interesting is the fact that both our Moon and Iapetus’ moon are in a near perfect circular orbit, and one side always faces its planetary host, locked into position.

• The Moon – On more than one occasion, researchers have found strange and large artificial structures on the back side of the Moon. We have witness testimony from credible sources including high ranking intelligence and military people who have revealed structures on the Moon. Carl Sagan once pointed out that artifacts found on the Moon or other orbiting objects in the solar system might be stored there by previous [extraterrestrial] expeditions for use in successive visits to our star system, avoiding detection by Earthbound humans. The Deputy Manager for the 1995 Clementine Mission to the Moon said it was really a reconnaissance mission to check out the bases on the back side of the Moon. In 1962, NASA scientist Gordon MacDonald published a paper stating it’s more likely that the Moon is hollow than not. MIT’s Sean C. Solomon furthered this statement citing knowledge of the Moon’s gravitation field as evidence for the assertion. Multiple governments, including Russia, have been calling for an international investigation as to where much of NASA’s photographs, footage and even Moon rocks have disappeared.

• Mars – There is no doubt that life once flourished on Mars, with vast oceans, mountain ranges and greenery. There may have been a very intelligent civilization on Mars, and still might be within it. A recent paper in the Journal Scientific Exploration “hinted strongly at artificial surface interventions” in the Cydonia region on Mars where there are pyramids and ‘The Face on Mars’. NASA astronaut Dr. Brian O’Leary even accused Carl Sagan of covering up the fact that NASA knew the Face on Mars was artificial. Buzz Aldrin spoke about a monolith on a moon of Mars.

• Saturn – The pictures NASA got back from the Voyager mission to Saturn in 1980 were apparently so mind-altering that they locked them up, according to retired U.S. Army Command Sergeant Major Bob Dean. In his book “The Ringmakers of Saturn”, Norman Bergrun revealed a NASA secret that large spacecraft were “proliferating” around Saturn’s rings and moons, and that these extraterrestrial ‘vehicles’ were responsible for making artificial rings around Saturn. Photographs of Saturn show something luminous near the gas giant planet’s surface. Bergrun had to leave the country in order to publish the book, and today a copy of the book is so rare that it is worth thousands of dollars.

Our solar system is fascinating, to say the least, and there is still so much we don’t know about it. What makes one even more curious is knowing the organizations and people who operate at the highest levels of ‘security clearances’ probably know a whole lot more. That being said, if you’re independently curious, there are more than enough resources available to satisfy your curiosity, you will find a way to investigate. At the very least you could get access to the best telescope you have and stare at the other planets, our Moon, and the Moons of other planets.

Perhaps the best thing to do is simply sift through the literature and you will find no shortage of strange anomalies that have been discovered in space -there’s truly no shortage. It’s also likely you will come across the tremendous amounts of controversy that come with these discoveries as well. Strange findings have been subject to ridicule within the mainstream, but that hasn’t stopped hundreds, if not thousands, of researchers and insiders from all backgrounds from continuing their study and education.

The Face On Mars Example

The Face on Mars is a good example of anomalies and ridicule. It has been the subject of several published papers that clearly show a high chance of artificial construction. Carl Sagan was even accused by his colleague, physicist and NASA astronaut Dr. Brian O’Leary for covering up the fact that ‘they’ knew the Face on Mars was artificial.

Today, it’s a much different story, and it appears that there is no doubt that life once flourished on Mars prior to the massive climate shift which occurred there that made it what it is today. Not many people know that Mars was once very Earth-like, with vast oceans, mountain ranges and greenery. Little did we know that there may have been a very intelligent civilization there, and still might be, perhaps within in.

A paper published in the Jornal Scientific Exploration was one of the latest to examine the Cydonia region on Mars. As the authors point out, “it validates the earlier measurements obtained using the lower resolution NASA Viking images, which hinted strongly at artificial surface interventions.” The key word there is artificial surface interventions. There are pyramids and faces on Mars, similar and in some cases, larger than those found here on planet Earth.

Then we have the Moon, which has also been the subject of recent peer-reviewed research. On more than one occasion, researchers have found what appears to be strange, and large, artificial structures on the back side of the Moon, the side we can never see unless we send probes and astronauts around it. To compliment all of the information regarding the Moon, we have statements from a number of credible sources in the form of witness testimony, from high ranking intelligence and military people etc. It’s safe to say that something strange is happening on the Moon. I do believe we went there, but I also believe what we were shown and told was heavily sanitized. Let’s not forget about Buzz Aldrin being so outspoken about a “Monolyth on the (one of the) moon of Mars.”

Iapetus, Perhaps The Most Puzzling

Which brings me to the topic of this article, Iapetus, one of Saturn’s moons. What’s unique about it is the fact that it has what appears to be a huge mountainous ridge that measures up to 20 kilometres tall, twice the size of Everest, and approximately 200 kilometres thick. It can be seen running exactly along the equator for well over three-quarters of the moon’s entire circumference, but it’s safe to assume around the entire planet. It was discovered in 2004, early in the Cassini mission.

First, let me set the stage. Iapetus is bizarre in a lot of ways. It has a yin-yang surface of dark and bright material. It is unexpectedly flat pole-to-pole. It seems to have an excessive number of large impact basins. And it has a mountainous ridge, up to 20 kilometres tall, running exactly along its equator for well over three-quarters of its entire circumference. The existence of this ridge was revealed very early in the Cassini mission, in an encounter at the end of 2004. – Jim Mars, Our Occulted History

A number of prominent researchers and scientists have hypothesized that our own Moon is artificial in nature, as so they have done with other Moons, like Iapetus. That being said, we don’t hear much about these theories & the credibility of the people behind them. They’re completely ignored by the mainstream simply because they don’t fit within the mainstream narrative which is nothing more than a theory in itself.