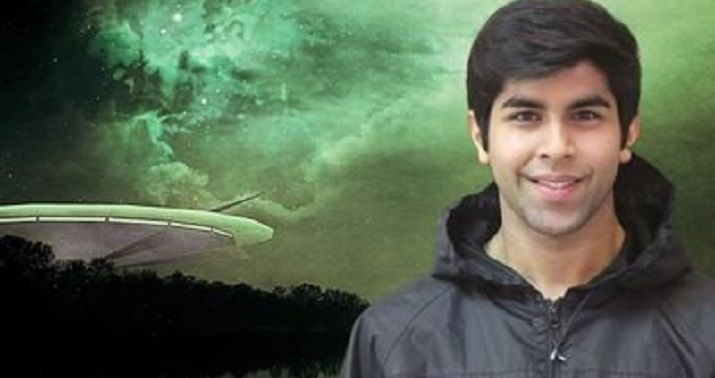 When A Scientist Confesses To Meeting Extraterrestrials

Listen to “E189 When A Scientist Confesses To Meeting Extraterrestrials” on Spreaker.

• Quantum physicist and CEO of the quantum computing company ‘ReactiveQ’, Deep Prasad (pictured above), is part of a group of professionals who intend to get to the bottom of the UFO incidents that US Navy aviators video recorded and authenticated. Why would he devote his valuable quantum computer time to the study of UFOs? Over Thanksgiving, Prasad told this article’s writer, Jazz Shaw, about an “absurd, world-changing experience” he had at the beginning of this year.

• On a sunny day in February 2019, at 9:40 am, Prasad was lying down at his home when he suddenly became paralyzed. Three small etheric humanoid ‘entities’ appeared and began to project a hologram of thousands of sentences and paragraphs in a language that looked like a marriage of Japanese and Egyptian hieroglyphics. Prasad was terrified, nauseous, and in disbelief. He tried to make sense of the symbols, but the sentences and paragraphs kept flipping so rapidly he couldn’t understand or translate them. The only English he recognized was “DNA”. So whoever was doing this understood English, but was choosing not to use it.

• One of the beings displayed golden holograms with golden sparkles in the middle of its suit. Then it jumped on top of Prasad’s stomach and slowly walked towards his head. Prasad felt a weird light hit the top of his head and he suddenly felt blissful and euphoric. The feeling was one of warmth and nostalgia. It was like a reminder that space is teeming with life, the Universe was sentient and aware of his existence, and that we’re all related to one another as cosmic beings.

• Prasad lost consciousness. Then he ‘woke up’ and not a minute had gone by since the experience started. Prasad was in shock. He couldn’t believe that no time had actually passed. After the experience, Prasad realized that the blissful feeling of oneness had never gone away. He had no more anxiety, depression, stress or trauma. It was impossible for him to feel fear. He felt only love for everyone. His beliefs in God changed too. He went from an atheist to being spiritual. Just weeks after this experience, Prasad had his first UFO sighting. He’s had three more over the past year. Others saw them as well.

• The first two weeks after it happened, Prasad experienced electrical anomalies wherever he went. He started having dreams of the inside of a UFO. His dream characters spoke through telepathy. He started feeling unnerved at this newfound fearlessness and unconditional love that were coming from outside of him. After a couple more weeks, the feelings dwindled down until he was back to normal. But with some effort, he was able to return to that blissful state of mind. Prasad is forever grateful for the experience. He now believes that humanity has an incredible future ahead of it.

• Why would a brilliant young scientist with so much going for him make up a story like that? He has nothing to gain and plenty to lose. He’s not making any money off of this UFO research. He’s actually spending his own money in ridiculous amounts. And he runs a tech corporation that requires investment money. Big investors don’t offer venture capital to crazy people. It’s bad for business.

• Deep seems like one of the sanest and smartest people you’re likely to meet. The incident took place in his home after he’d been awake for several hours, so it wasn’t sleep paralysis or a lucid dream. Something happened to him. The creatures he describes are classic Grey aliens. Were they in the room with him or were they projecting something into his mind? The “mental download” that Prasad experienced sounded reminiscent of the account that Sergeant Jim Penniston described after touching a spacecraft during the Rendlesham Forest incident, though Penniston received all ones and zeros.

Something remarkable happened this past weekend. So remarkable, in fact, that I wanted to share it with everyone (after receiving permission to do so). The story once again involves quantum physicist Deep Prasad. Regular readers will recall Deep from previous interviews I did with him about his quantum computing company (ReactiveQ) and his new venture where a group of professionals is attempting to hunt down more solid evidence about the UFOs the Navy has been talking about.

One thing I’d always wondered about Deep is how and why he became so interested – some might say obsessed – with the topic of UFOs and perhaps extraterrestrials. He’s a busy guy with a lot on his plate, trying to change the world of quantum computing. Why would he be on such a quest? He had previously hinted that he’d had an “experience” earlier that unleashed his interest, and that he might talk about it at a later date.

Well, on Thanksgiving, that date arrived. In a massive Twitter thread, Deep decided to come clean and share his experience with the world. Having obtained his consent, I’m going to republish it here for you. I’ve cleaned it up a bit to remove Twitter thread formatting, broke it up into paragraphs for better readability and corrected a couple of typos, but aside from that, these are his own words. And the story is out there. Way out there. And yes… it involves extraterrestrials. This is kind of long, but if you have even the slightest interest in this topic, I assure you it will be worth the time. I’ll add my own comments and conclusions at the end, but first, let’s let the man speak for himself.

It’s Thanksgiving, and this is going to be a rather complicated post. It’s also objectively not a good idea for me to write it given every Scientist has a target on their back in the UFO community (rightly so) and given that I am still a tech CEO.

Near the beginning of this year (February 1st), I had the most absurd, world-changing experience of my life. It happened in broad daylight at 9:40 in the morning in my home. More specific details will be for another time when I have a better safety net and can expand more. But to put it simply: I was paralyzed against my will, could not move, and saw 3 entities that had no-chill. Could I be crazy? Sure. Do I think I am? Obviously not. Could this have been a hallucination? I can’t prove it wasn’t or I wouldn’t be so worried about sharing this.

These entities projected hundreds/thousands of sentences and paragraphs in a language that looked like a marriage of Japanese and Egyptian hieroglyphics. I was terrified that I could barely move and was in complete disbelief at what was happening. I’d go back and forth between, convincing myself that I was having some sort of seizure or had fallen unconscious and that there was no way this was happening, to downright fear realizing that it all felt more real than reality.

I was scared that I couldn’t move and was not in control of the situation yet could think perfectly straight. My mind was racing. “These things are really real? Is this really happening right now? Are my family and friends ready for this if it ever happens to them? Are they going to kill me? How do I convey that I don’t want to die and that I’m not a threat?”

At the same time, I was trying to make sense of the symbols. It was incredibly frustrating that I couldn’t understand or translate them. The sentences and paragraphs would keep flipping rapidly and the only English word I saw, at least 3 times, was the word, “DNA”. This means that whoever or whatever was doing this (even if it’s my brain), clearly understood English. But was choosing not to use it for everything. The image of my room would disappear when I raised my head a little. But it was hard to do that and I would feel extremely nauseous.

When it disappeared I realized I was no longer in my room but somewhere else. When I would put my head back down, the image of my room would come back on again and the symbols were back on again. I decided to stop fighting what was happening and for some reason no longer felt fear but total fascination. The fear feeling would come back every now and then, but by this point, I was astutely observing everything that was going on. The color of their suits, their size, their mannerisms, the feeling that my mood was being rapidly cycled, etc.