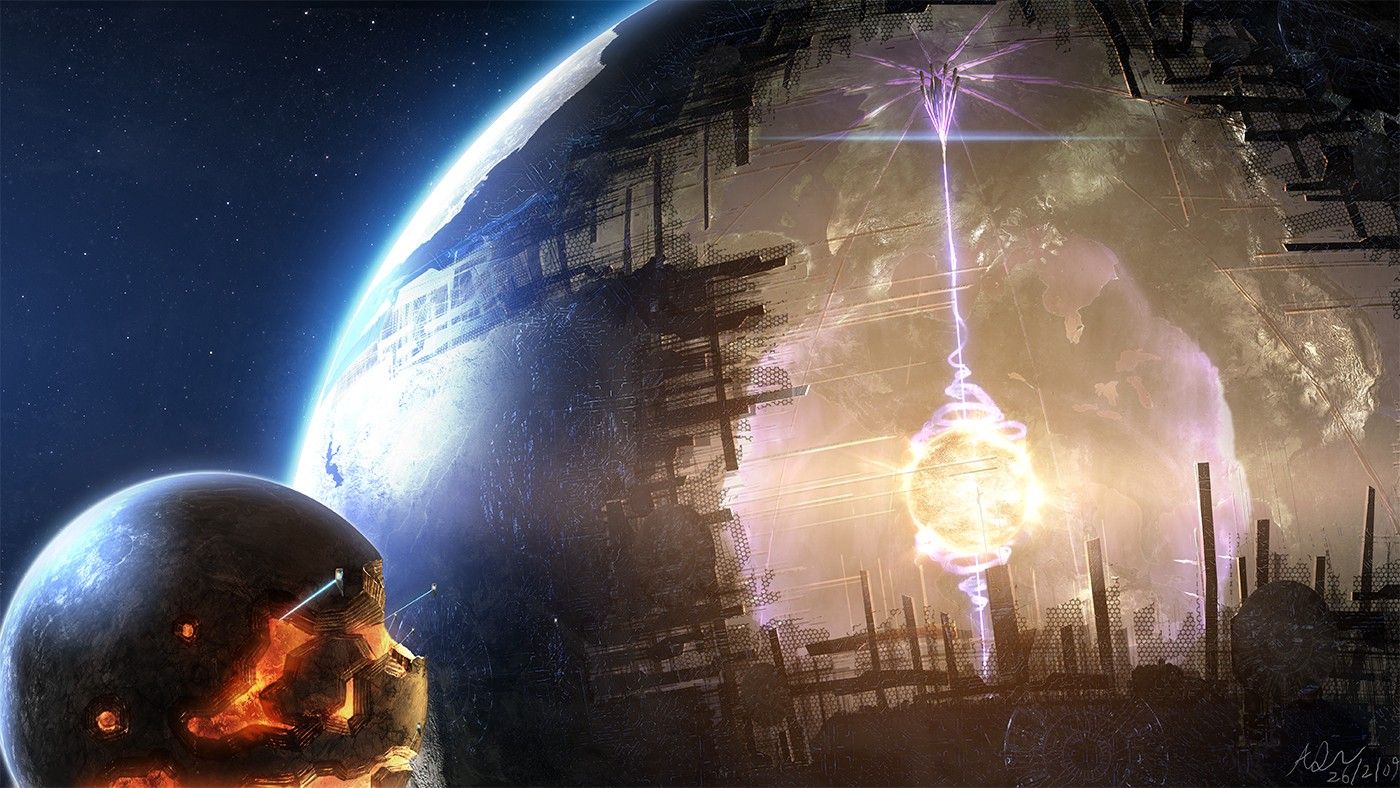 What Is a Dyson Sphere?

• In 1960, British-American theoretical physicist Freeman Dyson theorized that as an intelligent alien species’ population increased by 1% per year, their energy needs would grow exponentially becoming a trillion times larger in just 3,000 years. After developing and saturating the local moons and planets in their solar system, they may embark on a longer-term solution: The Dyson sphere.

• A Dyson sphere is a structure with platforms orbiting in tight formation that surrounds and encloses a larger celestial body, such as a gas giant planet like Jupiter or the system’s star itself, like a shell. Such an artificial structure would offer plenty of living space and energy production, drawing from the gas planet or star’s radiation. But as the Dyson sphere absorbed radiation, thereby dimming the planet from an outside observer’s perspective, Dyson theorized that the structure would need to re-radiate this energy through infrared wavelengths to avoid melting the structure itself. Therefore, a Dyson sphere would emit a bright signature in the infrared spectrum while being invisible to the human eye.

• This infrared radiation is considered a type of ‘technosignature’ that astronomers can use to detect an advanced civilization. Since the 1960’s, researchers have scanned infrared maps of the night sky in hopes of spotting a Dyson sphere, without success. But in 2015, Yale University astronomer Tabetha Boyajian did find a distant star that dimmed and flickered. Astronomers speculated that “Tabby’s Star” could be a partially built Dyson sphere. Because other astronomical experiments could not find other technosignatures from the star, scientists now think the object’s light patterns have some kind of non-alien explanation.

• In 1937, Olaf Stapledon first described a “gauze of light traps” surrounding a star system to utilize its solar energy in his novel “Star Maker”. Freeman Dyson acknowledged that this sparked his concept of a Dyson sphere. In 1992, a Dyson sphere was depicted in an episode of “Star Trek: The Next Generation”.

A Dyson sphere is a theoretical mega-engineering project that encircles a star with platforms orbiting in tight formation. It is the ultimate solution for living space and energy production, providing its creators ample surface area for habitation and the ability to capture every bit of solar radiation emanating from their central star.

Why build a Dyson sphere?

Why would anyone construct such a bizarre monstrosity? According to British-American theoretical physicist Freeman Dyson, who first speculated about these putative structures in 1960, an intelligent alien species might consider the undertaking after settling on some moons and planets in their local stellar neighborhood. As their population increased, these extraterrestrials would start to consume ever-greater amounts of energy.

Assuming this alien society’s populace and industry grew at a modest 1% per year, Dyson’s calculations suggested that the aliens’ area and energy needs would grow exponentially, becoming a trillion times larger in just 3,000 years. Should their solar system contain a Jupiter-size body, the species’ engineers could try to figure out how to take the planet apart and spread its mass in a spherical shell.

By building structures at twice the Earth-sun distance, the material would be sufficient to construct a huge number of orbiting platforms 6 to 10 feet (2 to 3 meters) thick, allowing the aliens to live on their star-facing surface. “A shell of this thickness could be made comfortably habitable, and could contain all the machinery required for exploiting the solar radiation falling onto it from the inside,” Dyson wrote.

But after absorbing and exploiting the solar energy, the structure would eventually have to reradiate the energy or else it would build up, causing the sphere to eventually melt, according to Dyson. This means that, to a distant observer, the light of a star wrapped in a Dyson sphere might appear dimmed or even entirely darkened — depending on how dense the orbiting platforms were — while glowing curiously bright in infrared wavelengths that aren’t visible to the naked eye.