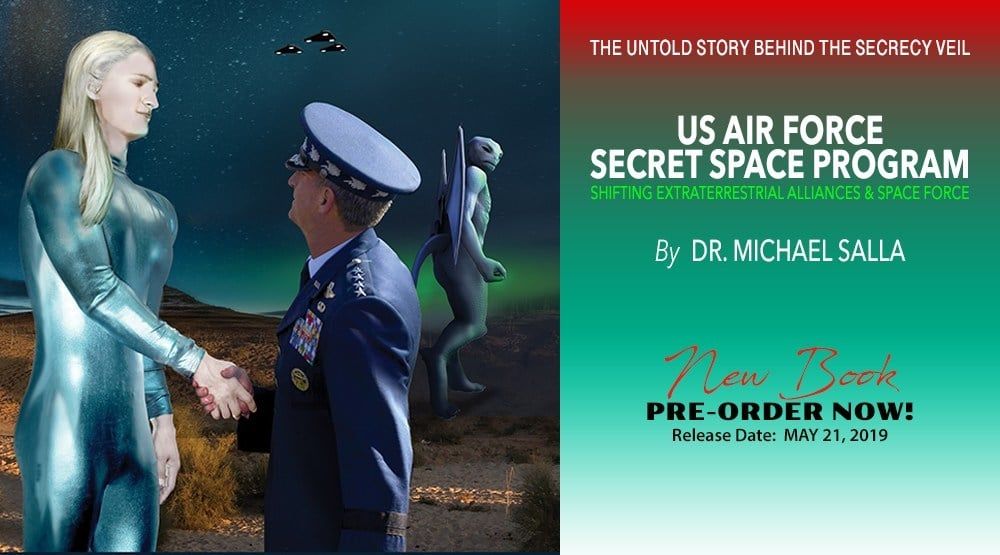 Due to the realization by Air Force leaders in 2016 that they had been deceived for many years by Deep State factions within the US government, as well as Deep State groups within the regimes of America’s major allies, the US Air Force made an ideological shift in alliances away from the Deep State secrecy and toward the public disclosure of its highly advanced technologies and off-planet assets.

These Deep State groups had encouraged USAF leaders to believe that their arsenal of secretly developed spacecraft and space weaponry would make the Air Force a power to be reckoned with in space. Only recently did Air Force space program commanders learned that, rather than being the “tip of the spear” of the US military’s entry into deep space, it was in fact a “coast guard”, lagging far behind other military forces possessing deep space capabilities.

Dr. Salla begins his as yet untold history of the US Air Force with its roots in the US Army’s Signal Corps and its reorganization as a separate and equal military branch after WWII. Salla then delves into the USAF’s secretive policy changes brought on by the recovery of extraterrestrial craft in the 1940’s; secret pacts made with a breakaway Nazi German colony in Antarctica; and Eisenhower’s secret treaties with various extraterrestrial groups in the 1950’s. This leads to the infiltration by Antarctic Germans into the military-industrial complex and NASA during the 1960’s, and the USAF’s development of stealth space stations in the 1970’s. By the 1980’s and 90’s, the USAF was building and deploying squadrons of saucer, triangle and rectangular-shaped craft which many witnesses would mistake for extraterrestrial UFO craft.

Prior to the revelation of a grand deception and its ideological shift in alliances, the USAF was a major asset of the Deep State and its shadowy Fourth Reich German allies, and not necessarily a protector of US national interests. But since its existential epiphany, the USAF has taken significant steps to realign its covert near-Earth space program with a more ethical group of extraterrestrials who have been working with the US Navy’s deep space program. In January 2018, the USAF demonstrated its positive shift in alliances by thwarting a Deep State CIA plot to destroy the island of Hawaii, thereby triggering a third world war.

The USAF’s profound ideological shift seems to have motivated President Donald Trump to create a sixth US military branch, the Space Force, by merging our near-Earth space assets under the authority of Air Force Command – no longer affiliated with the Deep State and its Fourth Reich allies. Dr. Salla anticipates a day when the Navy’s deep space Solar Warden program will also be revealed, and will join with the USAF’s space program to form a fully-independent Space Force military branch.

The creation of a transparent Space Force and exposing these endeavors to the public light will phase out the corrupting influence of Deep State/CIA black budget funding as the preferred method of building and operating military space programs in secret, which compromises the Constitutional directive of the US military. This will transform the civilian aviation and space industries, provide free energy sources that liberate humanity from its dependence on fossil fuels, and revolutionize the medical industry with the release of holographic and electromagnetic healing technologies that have been used for decades within the secret space programs. Space Force will also provide the opportunity for US authorities to disclose the truth about visiting extraterrestrial life, allowing the Earth to become a nascent member of a richly diverse galactic community.

When the American people, and people all over the planet, learn about the various secret space programs and breakaway civilizations that have been conceived and created over the past seventy years since WWII, we will all become awakened to our true reality. Suddenly so many historical puzzles will begin to make sense, e.g.: Hitler’s maniacal quest for world domination; the emergence of the Deep State under Truman; the incessant denial of the UFO/extraterrestrial presence; Eisenhower’s warning about the military-industrial complex; the assassination of JFK; the controversy surrounding the 1969 Moon landing; Ronald Reagan’s cryptic warnings of alien invasions; 9-11; perpetual wars; climate change; the steady decline of society and the planet itself; our stunted technological development and continued dependence upon fossil fuel energy; the election of Donald Trump as President; and the violent, self-centered idiocy that plagues our planet. Understanding our true reality will also provide a more accurate glimpse into the future.

America’s decline is due mainly to the fact that for seven decades our full financial and industrial resources have not been used toward the positive advancement of our own society. Instead, much of it – perhaps most of it – has been siphoned into off-planet elite Deep State enterprises. We will need to reclaim these resources, especially when the seas rise by an estimated thirty feet. Dr Salla’s secret space program book series will give those with open and inquisitive minds a tremendous head start in their research into this vast and sinister deception that has been perpetrated upon all of us.