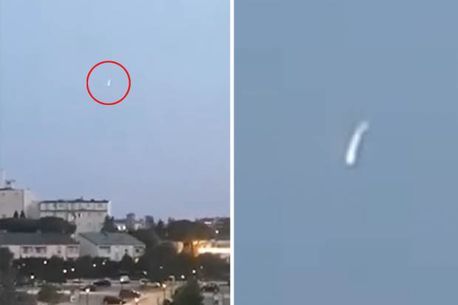 • Spencer Jackson, 52, from Wisbech (Fens of Cambridgeshire, England) was driving along the A142 in the early hours of Sunday morning September 8th when he saw an object falling from the sky. Spencer claims the space craft “was like nothing he’s ever seen before”.

• “When I got near Wimblington/Chatteris I saw something falling from the sky,” said Jackson. “It was this bright white, almost silver color – brighter than anything I’ve ever seen.” “It wasn’t a plane or a meteor.” “It was coming down at an angle.” “It was bigger than a truck.” “It was huge.”

• Spencer says the object vanished before it hit the ground. “It looked as though it was breaking apart as it came down, but then it was nowhere to be seen.” Spencer who works on a business park near Haverhill, said his colleague, who was coming from the opposite side of the county, also claimed to see “the long white thing fall [from the sky] and disintegrate”.

A man got the shock of his life this weekend, when he spotted a UFO “bigger than a truck” on his way to work.

Spencer Jackson, 52, from Wisbech claims he saw the mysterious flying object falling from the sky while he was driving along the A142 in the early hours of Sunday morning (September 8).

Despite his wife’s initial disbelief, Spencer claims the space craft “was like nothing he’s ever seen before”.

Speaking to CambridgeshireLive, Spencer said: “I can’t explain what I saw – but it fell from the sky.

“It wasn’t a plane or a meteor.

“I’ve looked on Youtube and I can’t find anything which looks the same.

“British Aersopace or the Ministry of Defence must know something – it was so big. ”

Spencer also said he wished he’d had someone in the car with him to get a picture of the object.

“I was driving to work at about 5:25am, the sun was just coming up and I was driving from Wisbech along the A142.

“When I got near Wimblington/Chatteris I saw something falling from the sky.

“Now this is Fenland and it’s a long, flat, wide open bit of road.

“It was this bright white, almost silver colour – brighter than anything I’ve ever seen.

“I can’t even hazard a guess at what it was.