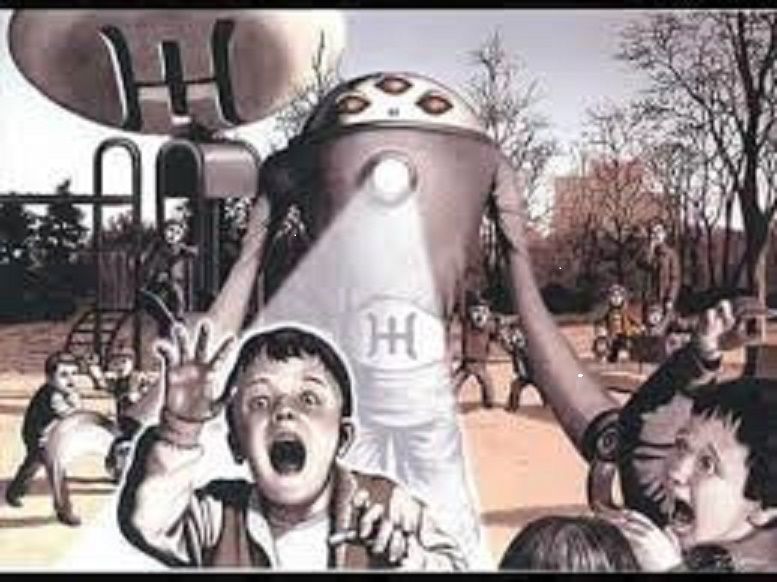 • On October 9, 1989, Russia’s press agency TASS confirmed the report of sightings of three aliens in the city of Voronezh, Soviet Union. 31 years ago (only a month before the fall of the Berlin wall and the Soviet State). The local community watched as a “banana-shaped” UFO appeared in the sky, and three robot-like beings emerged from it along with a ‘shining ball’.

• “Scientists have confirmed the recent unidentified flying object recently landed in a park in the Russian city of Voronezh,” read the TASS press release. “The aliens were three or even four meters (9 to 12 feet) tall, but with very small heads.″ Apparently, the aliens made a short promenade around the city park, and then ″they walked near the ball or disc and… disappeared inside.″

• Genrikh Silanov, head of the Voronezh Geophysical Laboratory, was reported by TASS as saying that Russian scientists found a 20-yard depression with four deep dents at the site. But they were most excited about finding that the beings left behind two abnormal rocks. “At first glance, they looked like sandstone of a deep-red color,” said Silanov. “However, mineralogical analysis has shown that the substance cannot be found on Earth.”

• When inquired, TASS and other Soviet news outlets stood by the Voronezh UFO incident and claims of aliens. However, a TIME magazine journalist, Howard G. Chua-Eoan, reported that the 1980’s policy of ‘glasnost’ – or ‘openness’ – led the Soviet media to be more open about events such as the Voronezh UFO incident. The news source also stands by other UFO sightings such as the ‘Petrozavodsk phenomenon’ that involved 48 unidentified flying objects, and an encounter between a milkmaid and a “cosmic creature” that occurred in region of Perm, Russia, close to the Ural mountains.

• [Editor’s Note]  Since the Voronezh UFO incident was such a major media event in Russia, with aliens landing in the city park, and since this article is woefully lacking, I will embellish the account from Wikipedia. The actual incident occurred on September 29, 1989 and was witnessed by a group of a dozen children and some adults in the city park. The children first spotted a small ball floating through the park, which morphed into a large disc landing near them. Witnesses then reported a “three-eyed alien” and a robot exiting the craft. The aliens never spoke, but stared at the horrified people, then went back to the disc craft and departed into the sky. Five minutes later the craft returned to the same spot (thought to have utilized a “biolocater”) to abduct a 16-year-old boy, using what was described as a 50 cm-long “pistol tube”. The children were the only ones claiming to have witnessed the aliens. (Judging by the illustrations of the alien creatures, they do appear to be ‘cartoonish’.) Although, Lieutenant Sergei A. Matveyev of the Voronezh district police station claimed to have seen the craft.

The scientist quoted in the TASS news report, Genrikh Silanov, later denied ever making any remarks or conducting any experiments about the Voronezh UFO. But many Soviet media outlets jumped on the bandwagon to promote the incident, with a reporter from Komsomolskaya Pravda even claiming to have an exclusive interview with the alien beings. The Soviet Scientific Commission ordered an official inquiry into the alleged incident. Though the city park area was found to have an above-average presence of the radioactive isotope cesium, the vice-rector of the University of Voronezh quickly dismissed the incident as fiction.

Russia confirmed the report of sightings of three aliens in the city of Voronezh arriving on the “banana-shaped” object (UFO) on October 9, 1989, 31 years ago.

On this day, October 9, 1989, 31 years ago Russia’s press agency TASS claimed that the extra-terrestrial contact on earth had already been made as it confirmed the report of sightings of three aliens in the city of Voronezh arriving on the “banana-shaped” object (UFO). “Scientists have confirmed the recent unidentified flying object recently landed in a park in the Russian city of Voronezh,” the release by TASS read. “They identified the landing site and found traces of aliens who made a short promenade about the park,” it added, claiming that two pieces of unidentified rocks were left behind which cannot be found on Earth.

According to a TIME report from the October 23, 1989 issue, a strange encounter between a milkmaid and a

“cosmic creature” was reported to have happened in the Russian region of Perm, close to the Ural mountains. Soviet newspaper Komsomolskaya Pravda claimed that the Russian researchers registered the “influence of energies” after a geologist made claims of the discovery of the flying saucer in the region. When enquired, TASS and several other Soviet news outlets stood by the existence of aliens’ claims in the Voronezh UFO incident of 1989.

Genrikh Silanov, head of the Voronezh Geophysical Laboratory, was reported by Tass as saying that

Russians scientists found a 20-yard depression with four deep dents at the site, suspecting that it was intact a UFO, adding, two abnormal rocks sent scientists in a jiffy. “At first glance, they looked like sandstone of a deep-red color. However, mineralogical analysis has shown that the substance cannot be found on Earth,” AP cited Silanov’s statement in the TASS report. “However, additional tests are needed to reach a more definite conclusion,” he added.