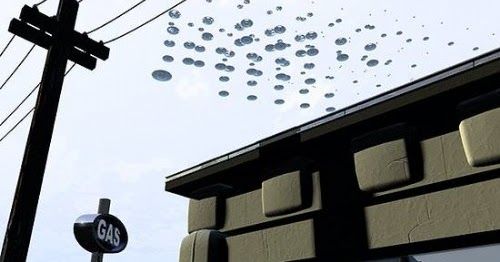 One UFO Easy to Refute; Hundreds of Them, Not So Much

• On June 25th, David Marler spoke at the Esther Bone Memorial Library in Rio Rancho, NM on the ‘Flying Saucer Invasion of 1950’ in Farmington, NM (in the Four Corners region near Aztec).

• On March 16th 1950, the residents of Farmington were treated to an aerial display of perhaps a dozen “silver saucers led by a larger red one”, according to a front page story in The Farmington Daily Times. The next day, perhaps 500 of these saucers returned to Farmington’s skies. The Daily Times noted that, “The objects appeared to play tag high in the air. At times they streaked away at almost unbelievable speeds.” There were “hundreds of them zooming through the skies,” at estimated speeds of 1000 mph.  (see photo above)

• Authorities at the time blamed the mass sighing on cotton blowing in the wind and/or a ruptured experimental military balloon. One newspaper accused the entire population of being drunk on St Patty’s Day moonshine. Marler did wonder why more photographs of these saucers had not had been taken over the three-day period.

• Virgil Riggs, who had been a third-grader out for recess at a nearby Aztec school, recounted he and his classmates seeing hundreds of objects not only in formation but also doing maneuvers of some sort on all three mornings. “We all thought it was pretty neat,” Riggs said. He remembered a teacher who had cried at the time, despite no hint of the flying crafts posing a threat.

• Marler says that the Farmington UFO incident is one of the “most misrepresented and under-rated in UFOlogy. … It’s surprising how many people don’t know about it.” Marler continued, “We need to know what’s in our air space.” A self-proclaimed “skeptical believer,” Marler said he was “trying to break through that shell, the stigma of UFOs — that UFOs are only seen by crazy people,” and he was “trying to present factual, historical information.” When informed of his record-breaking attendance for his talk at the library, Marler remarked, “I guess it goes to show UFOs are of interest to people when presented in a credible manner.”

RIO RANCHO, N.M. — David Marler’s goal for his 80-minute talk, “The Flying Saucer Invasion of 1950 — Farmington and Beyond,” Tuesday evening at Esther Bone Memorial Library wasn’t to encourage folks to believe in UFOs.

Marler, a resident of Rio Rancho, ardent UFO researcher and self-proclaimed “skeptical believer,” said he was “trying to break through that shell, the stigma of UFOs — that UFOs are only seen by crazy people,” and he was “trying to present factual, historical information.”

He talked about the mid-March 1950 events in the Four Corners area.

“There are incredible observations of incredible things,” Marler said, recounting what happened thousands of feet above Farmington, as well as above other areas of New Mexico more than 69 years ago.

In Farmington, it was estimated that about 85 percent of its residents observed from a mere handful of silver saucers ,led by a larger red one, to hundreds of them the next day.

What transpired there from March 16-18 makes the famous “Roswell Incident” pale in comparison, although the Farmington “invasion” lacks physical evidence.

But there are similarities: Each has been described as failures of balloons.

The Farmington Daily Times in its March 18, 1950, edition, reported in a front-page story that “Fully half of this town’s population still is certain today that it saw space ships or some strange aircraft — hundreds of them zooming through the skies.”

A local cop dismissed it, claiming it was only blowing cotton. At least one newspaper deemed the sightings due to “moonshine”; after all, the sightings were close to St. Patrick’s Day, a time when people imbibe.

But, an eyewitness told Marler almost 60 years later, blowing cotton was nothing new — why hadn’t people marveled over it year after year? Another decided it had been a Skyhook balloon launched from Holloman Air Force Base, and when it had ruptured, its shiny, plastic fragments had been seen showering down.

Later, though, Marler did some research and found none had been launched that week — and if one had burst, why would the parts to remain in the air for three days?