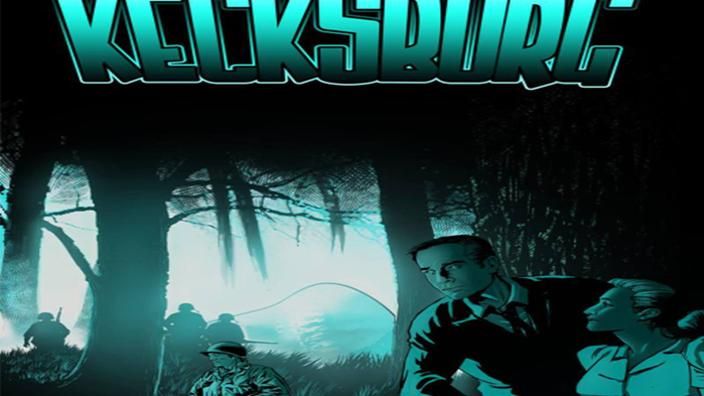 • “Kecksburg” is a new docudrama movie based on the UFO incident that occurred on December 9, 1965 in Kecksburg, Pennsylvania, a small town 30 miles southeast of Pittsburgh. Cody Knotts directed and wrote the film along with writers Emily Lapisardi and Vince Ruffalo. The movie intertwines the lives of several individuals in the town and how they all collide when a fireball blazes across the sky and crashes into the woods. (1:49 minute movie trailer below)

• In an early scene of the movie, President Lyndon Johnson and Senator Robert Byrd learn about the UFO crash while at a black-tie affair in West Virginia. They are told that two extraterrestrials from the crash are roaming the countryside. Johnson seems far less interested in the fact that aliens exist than he is in the Army containing the area and preventing any leaks to the public – at any cost. They will blame the Kecksburg incident on a Russian satellite.

• In the movie, the wife of the Kecksburg Fire Chief tells a local radio news reporter, John Murphy, about the Kecksburg UFO crash. Murphy manages to take photos of the crash site. This results in a run-in with a ruthless and evil government agent who is intent on keeping the incident hidden from the public and will kill anyone with knowledge of it. The agent forces Murphy to turn over his film roll. But Murphy secretly keeps some photos, including one of a dead alien.

• Meanwhile, reports indicate that a Grey alien is hiding in the woods of Kecksburg, while a human-like extraterrestrial is apparently trying to blend in with the local populace.

• The film’s plot is ambitious with the key characters intersecting with one another. What we end up seeing played out onscreen is a massive government cover-up to hide the fact that we are not alone and that UFOs have routinely visited our planet. By the end of the movie, you’ll believe that the craft that crashed at Kecksburg was definitely not a Russian satellite.

Kecksburg is a quiet town 30 miles southeast of Pittsburgh. It is the kind of place where everybody knows your name.

However, on December 9, 1965, all of that was about to change when a fireball blazed across the sky and crashed into the woods. Inspired by this real-life event, Cody Knotts’ film takes its cue from there.

What we end up seeing played out onscreen is a massive government cover-up to hide the fact that we are not alone and that UFOs have routinely visited our planet. If you enjoy Project Blue Book and The X-Files, this indie will be right up your alley.

Written by Knotts, Emily Lapisardi and Vince Ruffalo, this tense little thriller intertwines the lives of several individuals in the town and how they all collide on that unforgettable night. The story centers around local radio reporter, John Murphy who risks his life to expose the truth behind the Roswell of the east coast.

We decided to take a look at 3 of the main conspiracy theories featured in the movie that lead us to believe that the craft that crashed was definitely not a Russian satellite re-entering the atmosphere. See if you agree with us.

The Government Has Knowledge of Prior UFO Visitations

Anyone who watches Ancient Aliens on a frequent basis is familiar with the consensus that our government knows that UFOs have been on our soil in the past. In Kecksburg, this is evident when President Lyndon Johnson (Richard John Walters) is at a black-tie affair in West Virginia and he gets called out of the room with Senator Robert Byrd (Caesar James) to be debriefed.

Of course, they are discussing the incident in Pennsylvania and Johnson seems to understand that the Unidentified Aerial Phenomenon that crashed in the woods is not from this earth. To make matters worse, two aliens are on the loose roaming the countryside. Apparently, this sort of ordeal has happened before because the Commander-in-Chief’s uttermost worry deals with “containment,” or making certain that word about the incident doesn’t leak.