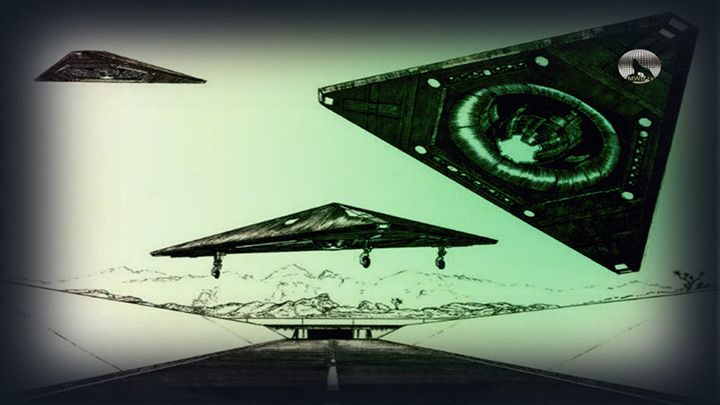 Is the Air Force Flying Planes Developed From Alien Tech?

• Top Secret super high-tech experimental airplanes that are tested over notorious air force bases such as Wright-Patterson, Groom Lake, and Area 51 have often been mistaken for UFOs. In fact, UFOs and secret military aircraft have been so intimately related that it is thought that they were actually “reverse engineered” from crashed and captured UFOs.

• No such story is better known among UFO circles than the fabled “Project Aurora”. In the late-1980’s/early 1990’s, the futuristic “Aurora” aircraft was being flown out of Area 51 under distinctly covert circumstances. The large, black-colored, triangular-shaped aircraft was said to be able to fly and maneuver at incredible speeds – over 6000 miles per hour – and could out-fly just about anything else on the planet. But according to the U.S. Government, the Aurora does not exist and has never existed.

• In March 1990, an article in Aviation Week & Space Technology magazine revealed that the term “Aurora” had appeared in the 1985 U.S. budget, possibly appearing by mistake as the program was so “Top Secret” that its very existence had to be denied at all costs. The rumored $500 million development cost for the aircraft had been paid to those at Area 51 working on an experimental “alien inspired” aircraft. By 1987, the budget for “Project Aurora” had soared to over two billion dollars.

• In the early 1990’s there were a string of sightings of large triangular shaped crafts over Scotland. Recently released documents show that Members of the United Kingdom’s Parliament had looked into rumors that the Aurora was operating secretly out of RAF Machrihanish Air Base at the tip of Kintyre, Scotland. Briefing notes to defense secretary Tom King on March 4, 1992 report, “[I]t would not surprise the relevant desk officers in the Air Staff and (Defense Intelligence Staff) if it did exist.”

• Chris Gibson, an aircraft expert having 12 years’ experience with the Royal Observer Corps, said he saw a triangular plane flanked by two US fighters being refueled in flight by tanker while he was working on the Galveston Key oil rig (Texas) in 1989. The plane was unlike anything he had ever seen and reported the sighting to Jane’s Defense Weekly in 1992.

• Predecessors to the Aurora triangle craft were the US Air Force’s SR-71 Blackbird spy plane from 1964 to 1998, and the U-2 spy plane in the late 50’s/early 60’s. In the late 1990’s, journalist Nick Cook of Jane’s Defense Weekly traveled to Lockheed’s ‘Skunk Works’ to interview its head, Jack Gordon, and tour the facility. Cook writes,“Just before I left the [Skunk Works] building, I stopped in front of a large chart on the wall of the lobby area. It proudly illustrated the lineage of every Skunk Works aircraft since the XP-80. Past the picture of the U-2, past the SR-71 Blackbird and the F-117A Stealth Fighter, past the YF-22 and DarkStar, and there was something called ‘Astra.’” Cook asked Lockheed’s press representative what “Astra” was, and weeks later he was told it was a 30-year-old concept for a “high-speed airliner.”

• In 2013, Lockheed announced that it had in development the SR-72, the successor to the famous SR-71 Blackbird. In 2017, observers reported the first sightings of a demonstrator model of the planned SR-72 high-speed aircraft. Rob Weiss, executive vice president and general manager of Lockheed Martin’s Advanced Development Programs, hinted that progress towards an optionally piloted SR-72 was proceeding on schedule. Weiss is quoted as saying “[W]e, along with DARPA and the services, are working hard to get that capability into the hands of our war-fighters as soon as possible.”

• So the SR-72 is definitely a thing, and it and may just owe its lineage and pedigree to a plane named “Aurora” or “Astra” that supposedly does not exist, sitting atop a famous Family Tree.

• [Editor’s Note]   In Dr Michael Salla’s latest book: US Air Force Secret Space Program, Shifting Extraterrestrial Alliances & Space Force, Dr Salla states that Edgar Fouche, who spent 12 years working at Area 51 in the 1980’s and 1990’s, confirmed that the SR-71 Blackbird had indeed been replaced by Aurora-class aircraft, e.g.: hypersonic aircraft that employs anti-gravity and stealth technology. (see chapter 15)  Said Fouche, “The Aurora comprises the SR-75 capable of speeds above Mach 5, and acts as a mother ship for the SR-74 that can travel at speeds of Mach 18 or more into space to deliver satellites.”

Fouche also revealed that there is a third vehicle belonging to the Aurora Program called the TR-3B, code named ‘Astra’, which was the most highly classified program that he and other workers at the Groom Lake/Area 51 facility were aware of. The triangular shaped and nuclear-powered Astra is the most classified aerospace development program in existence. The TR-3B Astra also incorporates three rocket engines using conventional fuel sources like hydrogen, oxygen and/or methane. The anti-gravity system is a “Magnetic Field Disrupter” which rotates highly pressurized mercury-based plasma around a circular accelerator ring. MFD technology reduces the craft’s weight by a factor of 89%, which allows it’s conventional jet propulsion system to provide the necessary thrust to make the TR-3B outperform conventional vehicles. The TR-3B is a high altitude, stealth, reconnaissance platform with an indefinite loiter time. Fouche references Scotland as one of the locations where an operational TR-3B was based. Hundreds of witnesses reported black triangle craft in the skies over Scotland and Belgium from November 1989 to April 1990, including a very well-documented incident on March 30, 1990 involving Belgian F-16 fighters attempting to intercept a flying triangle.

Corey Goode asserts that the TR-3B was a “hand me down” to the USAF’s military space program from an even more advanced and classified space program when covert US and German corporations combined to build a vast fleet of vehicles for the Antarctic German “Dark Fleet” space program throughout the 1960’s and early 70’s. The TR-3B was among the vehicles that were developed during this period. According to Dr Salla, as of September 2017 the USAF has abandoned its Deep State/ Antarctic German/ Reptilian/ Corporate allies and have now joined with a rival Nordic ET faction to reveal to the public its advanced air/space craft and low orbit space platforms under a forthcoming ‘limited disclosure’ scenario.

Over the years, mysterious military aircraft and UFO sightings have always marched in lockstep. Test flights of Top Secret or experimental airplanes have very often been mistaken for UFOs, and such research and development of these super high-tech airplanes is often conducted at the very air force bases most often associated with UFO lore, such as Wright-Patterson, Groom Lake, and of course, Area 51.

In fact, UFOs and secret military aircraft are so intimately related, it has often been suggested that such airplanes — for example the F-117A stealth fighter — were actually “reverse engineered” from crashed and captured UFOs.

No such story is better known among UFO circles, then the fabled “Project Aurora,” a project that has led to the development of actual military aircraft, some that to this day, officials still refuse to admit exist.

It all started back in the late-1980s/early 1990s, when rumors began to circulate among the aviation world that a highly secret, futuristic aircraft was being flown out of Area 51 – and under distinctly covert circumstances. The supposedly large, black-colored, triangular-shaped aircraft was said to be able to fly and maneuver at incredible speeds – as high as Mach 8, or over 6000 miles per hour – and could outfly just about anything else on the planet. It was rumored to be known as “The Aurora.”

Officially, at least, and according to the U.S. Government, the Aurora does not exist and has never existed.
The name “Aurora” was first ascribed to the mysterious super-plane in March 1990. That was when the well-respected magazine Aviation Week & Space Technology (AW&ST) had a cover story featuring the “non-existent” aircraft.

The article within revealed that the term “Aurora” had appeared in the 1985 U.S. budget – and had possibly appeared by mistake, which makes sense if the program was so “Top Secret” that its very existence had to be denied at all costs. And speaking of costs, it was rumored that around $500 million had been provided to those working out at Area 51 on secret, futuristic, some would even say even, “alien inspired,” aircraft.

AW&ST suspected that “Aurora” was not the name of any one single plane, but a “code-name” for any number of aircraft under development that were both radical in design and technology. Later investigators, though, concluded that Aurora referred to just one type of aircraft. AW&ST learned that by 1987 the budget for “Project Aurora” had soared to an excess of two billion dollars.