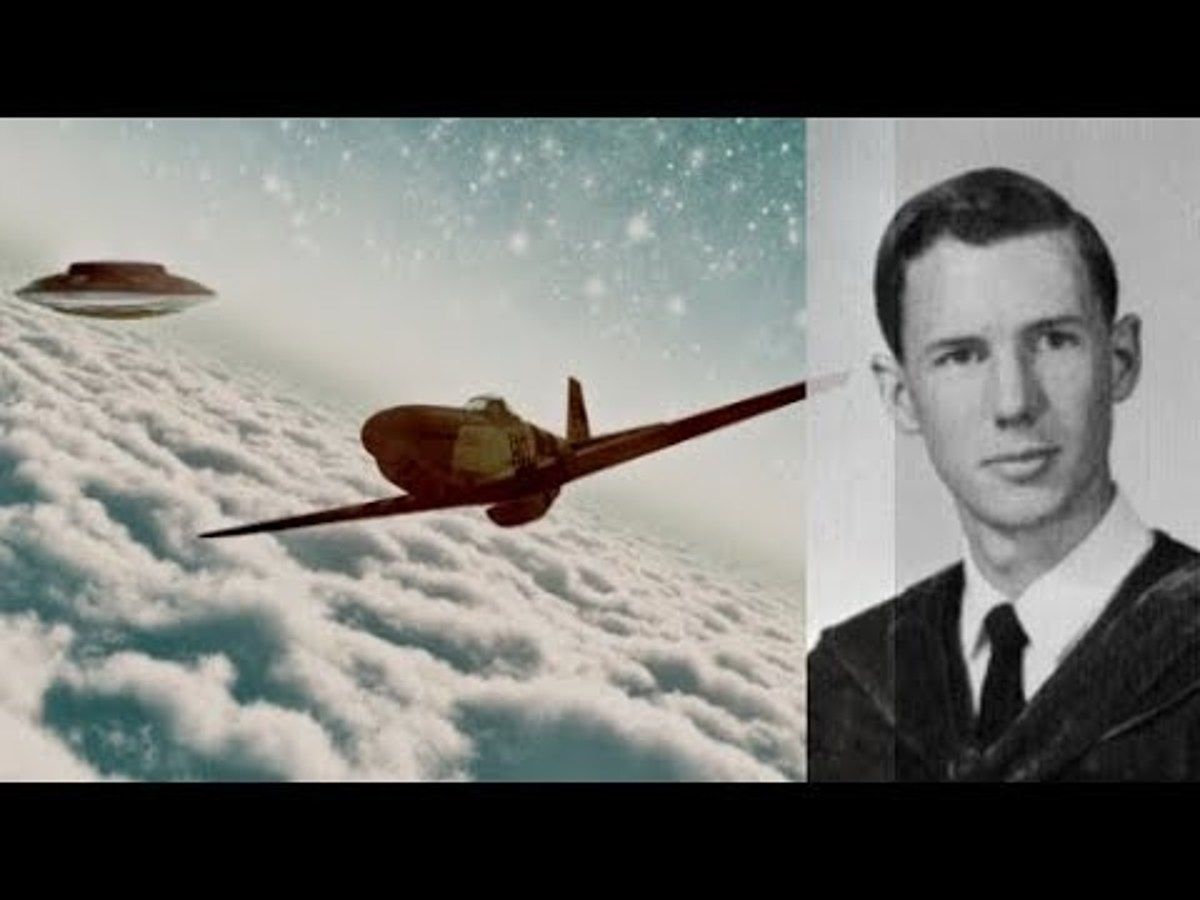 • In the early evening hours of October 1, 1948, George Gorman (pictured above), a 25 year old WWII veteran and flight instructor from Fargo, North Dakota was flying his P-51 Mustang along with a squadron of other pilots in the North Dakota Air National Guard. Part of their flight path took them over the North Dakota Agricultural College football field where the NDHC Bison were playing the Augustana Vikings. Kickoff was 8 pm.

• About a half hour later, most of the pilots flying decided to call it a night, but second lieutenant Gorman wanted to get in more flying time. Gorman was flying about two and a half miles from the football field when an air traffic controller told him about a small Piper Cub in the area. He acknowledged the smaller plane about 500 feet below, but a few minutes later, he spotted something else. Gorman said it was a “flying disk,” round with well-defined edges, brilliantly lit and circling slowly over Fargo. He called it on to the airfield tower, but their radar was not picking it up.

• When Gorman decided to get closer to the object, it suddenly got brighter and shot away. He estimated it was flying around 250 miles an hour, but accelerated to 600 miles an hour. Gorman’s plane could only fly about 400 miles an hour, so he lost the object. But it came back and flew right at him. “When the object was coming head on, I held my plane pointed right at it,” Gorman said. “The object came so close that I involuntarily ducked my head because I thought a crash was inevitable. But the object zoomed over my head.” The aerial encounter lasted 27 minutes.

• With the clear weather conditions, the fans at the football game might have seen flashes of light, not unlike heat lightning. They also might have heard the sounds of Gorman’s plane and the object. But researchers haven’t been able to track down any fans or players who were there that night, even though the Bison did break a nine-game losing streak.

• Recently declassified US Air Force documents include a diagram Gorman drew of what went on in the air that night. (see below) UFO historian Richard Dolan says the detailed drawing tells us a lot. “It shows you’ve got an experienced, seasoned World War II fighter pilot who is dealing with a ‘light phenomenon’ that is clearly outperforming his aircraft.” Gorman was so shaken after the incident that he had trouble landing the plane. He told The Fargo Forum it was “the weirdest experience I’ve had in my life.”

• Gorman told his commanding officer what happened. The incident was referred to Air Force intelligence. USAF investigators arrived in Fargo on October 4th and interviewed the two air traffic controllers in the tower that night as well as the pilot of the Piper Cub, a local physician. All of them corroborated Gorman’s account. In Gorman’s written statement, he wrote that he was convinced there was “definitive thought” behind the object’s maneuvers and that the UFO could go faster, turn tighter and climb steeper than his aircraft. The Air Force concluded the UFO was a combination of the planet Jupiter and a weather balloon. When Gorman insisted it wasn’t a weather balloon, the Air Material Command warned him not to divulge any further information or he would be subject to a court martial.

• For the rest of his military career, Gorman refrained from talking about what came to be known as the “Gorman dogfight”, one of the most infamous and credible UFO sightings on record. The incident was even featured on the History Channel show, “Project Blue Book” in 2019. Gorman’s military career took him to bases in Italy and throughout the US. He retired as a lieutenant colonel and died in the early 1980s in Texas at the age of 59.

beside his typewriter in the smoke-filled newsroom that day in the fall of 1948 when he wrote his headline for Oct. 1: “Aerial Display Likely in Bison-Augustana Game Tonight.” Of course, in this case, “aerial display” referred to Fitzgerald’s prediction that the game would feature more passing than rushing.

NDSU won that night 14-6, hardly a show of aerial dominance. Nonetheless, Fitzgerald’s headline turned out to be strangely prophetic as there was a pretty spectacular aerial display in the sky that night. It became the subject of a U.S. government investigation, the files of which have only recently been declassified and open for the public to see.

It’s come to be known as the “Gorman dogfight” and is one of the most well-known 20th century UFO stories. It’s also one of the most credible, considering the man who claimed to see the flying saucer was an accomplished World War II pilot and at least three other witnesses were experienced aviators.

For years, reports of what happened that night came from the eyewitnesses and Gorman himself. But

now that the files have been declassified, more details have emerged. The incident was featured on a History Channel show called “Project Blue Book” in 2019.
Who was George Gorman?

According to columnist Curt Eriksmoen, who wrote about Gorman in The Forum in 2011, Gorman was born July 7, 1923, to Norbert and Roberta Gorman. He grew up in Fargo, where his father was a Cass County agent. During World War II, Gorman became a B-25 instructor for French aviation students. When the war was over, he returned to Fargo and was employed as the manager of a construction company.

When the North Dakota Air National Guard formed at Fargo’s Hector Airport on Jan. 16, 1947, Gorman joined the squadron as a second lieutenant.

Gorman was flying his P-51 Mustang with other guard pilots in the early evening hours of Oct. 1, 1948. Part of their flight path was over the old Dacotah Field where the North Dakota Agricultural College Bison football team played its games. According to North Dakota State University Assistant Athletic Director Ryan Perreault, the field was slightly south of the current Dacotah Field.

“Dacotah Field at that time was located adjacent to Churchill Hall in the center of campus where the Memorial Union and A. Glenn Hill Center now sit,” Perreault said.

He said kickoff was 8 p.m. that Friday night.

About a half hour later, most of the pilots flying decided to call it a night, but Gorman wanted to get in more flying time. According to a story in The Fargo Forum dated Oct. 3, 1948, Gorman was flying near Hector Field, about two and a half miles from the football field, when an air traffic controller told him about a small Piper Cub in the area.

He acknowledged the smaller plane about 500 feet below, but a few minutes later, he spotted something else.