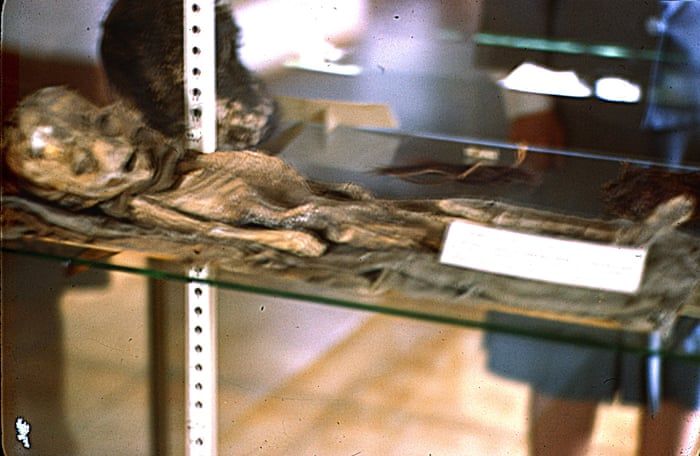 • Scotland has its own ‘Area 51’ hotspot of UFO sightings known as the Falkirk Triangle, centered on Bonnybridge (in central Scotland between Edinburgh and Glasgow) where 300 sightings are reported annually. It began in 1992 when James Walker was driving between Falkirk and Bonnybridge and stopped when he spotted a shining, star-shaped object hovering over the road, blocking his path. Then the object just flew away at “an incredible speed”.

• Other residents of the Falkirk Triangle have reported a “howling” UFO that buzzed their car; a cigar-shaped craft seen landing on a local golf course; being abducted and taken aboard an alien craft for examination, and then having their mind wiped. Local politician Billy Buchanan has demanded inquiries with three letters to the Prime Minister. “How do we know aliens aren’t walking about?” Buchanan said in 2005.

• In July of 1947, Dan Wilmot and his wife were sitting on their porch near Roswell, New Mexico just before 10pm when they witnessed “a large glowing object (that) zoomed out of the sky”, hovering, and then vanished at high speed. The Roswell Daily Record newspaper famously quoted an Air Force intelligence officer that a ‘flying saucer’ had been recovered on a nearby ranch. The term ‘flying saucer’ has been coined just days before by an amateur pilot named Kenneth Arnold who watched a formation of UFOs fly past Mount Rainier in Washington State.

• The military quickly reversed their assessment, calling it a downed weather balloon. But the Roswell incident resurfaced in 1978 when a former Air Force intelligence officer, Jesse A Marcel, mentioned seeing the crash and the alien occupants to a ham radio correspondent, who told UFO researcher Stanton Friedman. In 1947, Marcel was in charge of security for the atomic weapons research program both at the Roswell Army Air Base and in the Pacific where they planned to detonate atomic bombs.

• Major Marcel’s son, Jesse Junior, then 11, later claimed that he handled pieces of alien material. It was also later reported that a nurse at the base said she had been present at autopsies of three creatures which had been recovered from the crash debris. The nurse was never identified and was said to have died in a plane crash. In July 1997, days before the 50th anniversary of the Roswell crash, the US Air Force released a 231-page report – The Roswell Report: Case Closed – which stated that there was no UFO crash, and the recovered bodies were crash test dummies.

• In 2012, Joseph Beason inherited a series of color slides from his sister who, 14 years earlier, had been hired to dispose of the belongings of an old woman and she couldn’t bring herself to throw away the undeveloped Kodachrome film. Years passed until she got round to looking at them. They appeared to be post-war pictures of General Dwight Eisenhower on a victory train tour, accompanied by Clark Gable and Bing Crosby. There were also contemporary shots taken in European capitals. But two of the slides were wrapped in parchment. It appeared to be a small, brown creature with withered arms, shriveled legs and a large, triangular skull with gaping eye sockets lying in a glass case. (see featured image above) She was sure it was a dead space alien.

• Beason and his videographer friend, Adam Dew, found that the slides had belonged to a women named Hilda Blair Ray in Arizona. An analysis by Kodak confirmed the prints had not been tampered with and dated them to between 1945 and 1950, the time frame of the Roswell incident. The news started to leak out, and in May 2015, 7,000 people paid up to $86 to attend ‘BeWitness’, a four-hour show in Mexico City’s grandest theater where, after innumerable speakers and ufologists, the slides were projected onto huge screens.

• The mummy, claimed to be that of a Native American child, was previously on display at the Chapin Mesa Archeological Museum in Mesa Verde, Colorado. It had been discovered in a series of cave dwellings cut into Arizona cliffs in 1896 and later donated to the museum. Had it been an elaborate scam to make a quick buck? The two men own up to a grand mistake on their part but deny any fraud.

• [Editor’s Note]   Does this look like a mummified, 2-year old human child to you? Just because it was found in 1896 and was in an Arizona museum doesn’t mean it can’t be an alien body. Get Dr. Steven Greer and Emery Smith on it. They’re experts in small, mummified alien beings.

Dan Wilmot and his wife were sitting on their porch reflecting on the day. It was a few minutes before 10 in the evening, the brutal sun had given way to a balmy evening and the New Mexico sky was clear when, in their words, “a large glowing object zoomed out of the sky”, hovered, and then disappeared from view at high speed.

They both ran to their garden fence to try to follow its path before it vanished.

Six days later the local daily newspaper reported – quoting the intelligence officer from the local air force base – that a flying saucer, which had crashed into scrub at Foster’s Ranch, had been recovered.

That report, in the Roswell Daily Record on this day in 1947, set off either one of the world’s greatest conspiracy theories – or a monumental and successful cover-up which makes the JFK affair look like child’s play.

The story was quickly denied. It was said to be an experimental weather balloon. And there it may well died had not that intelligence officer, Jesse A Marcel, allegedly bound for decades by official secrets, subsequently mentioned it to a ham radio correspondent who, in 1978, told Stanton Friedman, a UFO researcher. The aliens were out of the closet, or coffin.

The Roswell air base in 1947 was the centre of the United States’ atomic weapons research programme. Marcel was in charge of security, not just there but in the Pacific where tests were planned to take place. His son, Jesse Jnr, then 11, later claimed that he handled pieces of the craft. Even later it was reported that a nurse at the base said she had been present at autopsies of three creatures which had been recovered from the debris. Both Marcels are dead (but you can see their accounts on YouTube), the nurse was never identified and, as in most of these mysteries, she is said to have conveniently died in a plane crash.

In July 1997, just days before the 50th anniversary of the crash when spectators would flock to Roswell, the US Air Force released a 231-page report – The Roswell Report: Case Closed – which rubbished the theories and explained that the three aliens were crash test dummies. Closure? It was merely proof for ufologists that the state secrecy about what really happened in what was known as Area 51 was being reinforced.