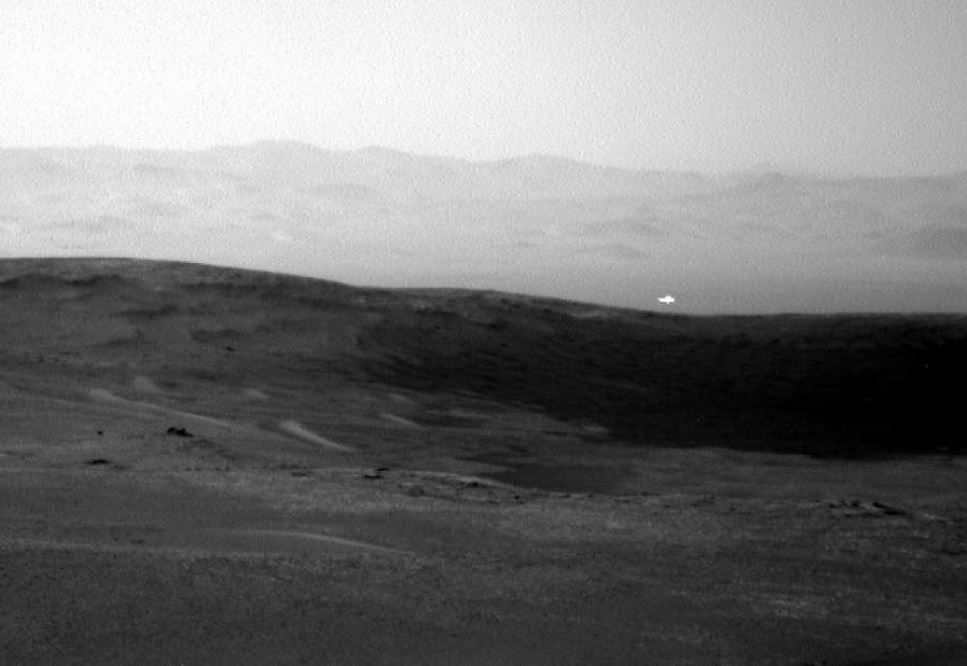 A Glint Of Light And A Hint Of Life: Mars Is Getting Very Interesting Right Now

• On June 16th, as NASA’s Mars Curiosity rover lumbered across the plains of Mars, a glowing object was captured on camera hovering just above the Martian surface (pictured above). Another camera image taken 13 seconds after showed nothing.  (see 38-second video below)

• When a similar flash of light made headlines in 2014, Justin Maki of NASA’s Jet Propulsion Laboratory said, “In the thousands of images we’ve received from Curiosity, we see ones with bright spots nearly every week.” Maki wrote them off as cosmic-ray hits or sunlight glinting off of rock surfaces.

• Days later, the rover detected possible microbial life on or inside the planet as indicated by a large spike in methane. While conducting further analysis, NASA said the rover had detected methane in the past and that the planet seems to have seasonal peaks and dips. NASA is coordinating with the scientists working with the European Space Agency’s Trace Gas Orbiter, which is orbiting Mars, to find the origin of the gas.

NASA’s Mars Curiosity rover spotted a strange glowing object that seemed to hover just above the surface of the Red Planet earlier this month.

While the glint on Mars has captured the imagination of folks on social media, it was likely just sunlight, a cosmic ray or a camera artifact. But in an unrelated development days later, the rover detected something else ― and it could be a long-sought signal of possible microbial life on or inside the planet.

The glowing object was captured on camera ― look at the right side of this raw image taken from the NASA website on June 16.

It doesn’t appear on any of the images snapped before or after, taken about 13 seconds apart, so if it was an object of some kind it moved quickly. More likely, however, it was nothing too out of the ordinary.

“In the thousands of images we’ve received from Curiosity, we see ones with bright spots nearly every week,” Justin Maki of NASA’s Jet Propulsion Laboratory said in 2014 when a similar flash of light made headlines. “These can be caused by cosmic-ray hits or sunlight glinting from rock surfaces, as the most likely explanations.”

So, the flash of light was unlikely to be a sign of activity on the planet.

But something else was detected on Mars last week that just might be a sign of life: methane. The New York Times reported that Curiosity detected a spike in methane, which, if confirmed, could hint of microbial life hidden beneath the surface of Mars.