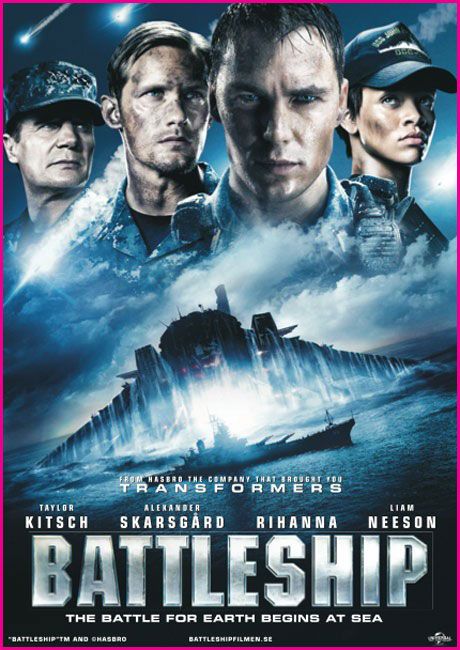 Is Alien false flag event on the way?

According to Gordon Duff, senior editor of Veterans Today, intelligence sources are revealing that hostile extraterrestrials are militarily engaging with world naval forces. In an article, provocatively titled, â€œUFO War: Chinese and US Navy off San Francisco,â€ Duff claims that the Chinese navy is lending assistance to the US in battling these hostile forces in what looks like a real life version of the recent movie Battleship. Duff claims that his intelligence sources are Asian, and that US naval forces are stretched thin in the Pacific due to a beefed up naval presence in the Persian Gulf. Duff admits that the story stretches credibility but that his source is usually reliable, thereby raising the possibility that either the story is largely accurate and/or officially sanctioned disinformation. Are we being prepared for an alien false flag invasion?

Duff is a former Marine and has been very outspoken in exposing the misuse of government power and authority. Veterans Today is a highly popular newsblog taking on many controversial topics not covered by the mainstream media. It includes former senior military officers on its international Board of Directors. So it was very surprising to see Veteranâ€™s Today on Monday leading with Duffâ€™s attention grabbing headline and article. Duff claims:

This last week, reports of Chinese naval vessels off the US coast, Northern Californian in particular, have been reported but denied. Now an Asian intelligence agency reports that a combined fleet operation between the US and China has been going on, a full combat operation against what we are told is a â€œhighly unfriendly extra-terrestrial threat.â€ The verifications of the fleet operations have been many, there have been no confirmations from the US side though the ships have been seen by every vessel that makes it offshore.Â  The true nature of both the threat and the extent of the multinational military force used is beyond any imaginable classification level.

The claim that a multinational military force is battling a UFO threat off the coast of San Francisco appears to be circumstantially supported by unusually high US naval activity in the region. Duff claims that no US military sources are confirming these events. He refers to a classified memo that apparently is being circulated to only a small group of need-to-know officials. Duff claims the memo mentions:

In his conclusion Duff writes: â€œI either have to give this a 70% or reclassify a reliable official source as purposefully leaking something that makes no sense.â€

In the swirl of rumors surrounding UFO naval incidents described in Duffâ€™s article, itâ€™s clear that some intelligence agency is depicting extraterrestrials as hostile. This goes against the evidence accumulated over more than six decades that extraterrestrials have been peacefully engaging with governments and private citizens to raise consciousness, share advanced technologies, and prevent nuclear warfare. While the abduction phenomenon rightly raises concerns over the emotional and psychological impact of some extraterrestrial activities, itâ€™s rare to hear of citizens being physically injured. While it is always possible that a new faction of extraterrestrials may have recently arrived that are indeed hostile, itâ€™s more likely that the incidents Duff describes are part of a psychological warfare program. The goal is to firmly establish UFOs and extraterrestrial life as issues belonging to the national security domain, rather than to international diplomacy.

Rumors of a false flag alien date back to the â€œReport from Iron Mountainâ€ document first released in the early 1960s and published in 1967. Dr Werner Von Braun later confided to a close colleague that a false flag alien invasion was indeed been planned by corporate entities along with their national security agency partners. An alien false flag event would be the ultimate way in which national security agencies and their multinational corporate partners could engineer government policies that increase their respective power, and maintain the secrecy of an extensive number of classified programs that are funded by a quasi-legal black budget. What Duff describes in his article, and parallels with the recent Battleship movie, has the tell-tale characteristics of a psychological warfare program to prepare the general public for a false flag alien invasion.