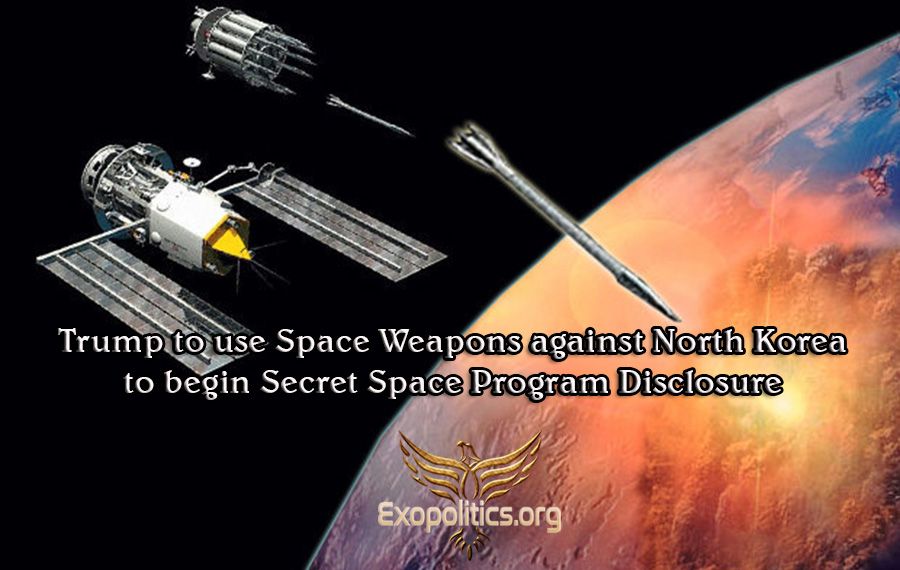 On October 5, President Donald Trump cryptically spoke to reporters about the “calm before the storm” after a White House dinner with his top military leaders and their spouses. Trump’s previous and subsequent comments suggest that the US military is prepared to launch an overwhelming first strike against North Korea.

According to secret space program insider, Corey Goode, this will involve highly classified space based weapons systems that have never before been publicly revealed.

Here is how the Associated Press described the scene for Trump’s October 5 comment:

Reporters were led hastily to the grand State Dining Room, where they walked into a scene of the president, his highest-ranking military aides and their wives posing for a group photo…. Trump gestured to the reporters in the room.

“You’ll find out,” the president said.

As to the country Trump was alluding to, he gave a tweet on October 7, which gave a clear answer:

Trump is clearly alluding to a massive military operation being planned against North Korea. Such an operation would require weapon systems that could very quickly destroy much of North Korea’s military infrastructure in order to prevent it from retaliating against South Korea, Japan, or even the US itself.

Almost four million people in Seoul and Tokyo alone would be killed by a North Korean retaliatory nuclear strike according to a study conducted by scholars at the John Hopkins School of Advanced International Studies.

The kind of weapons systems required to take out North Korea’s military infrastructure would have to be orders of magnitude more powerful than those used in the air war against Iraq in 2003, and against Serbia in 1999. These air wars took weeks to wipe out the bulk of Iraq and Serbia’s air defense, command and control, and vital military infrastructure.

The US would have to achieve the same strategic goals in a matter of minutes, rather than weeks. This firmly leads to Trump authorizing the use of highly classified space based weapons systems against North Korea. At the official level, space based weapons are non-existent and are merely being planned for the future.

At the classified level, space weapons have been secretly deployed by both the US and China. According to the National Institute for Public Policy, China “has the capability of attacking, destroying or disrupting the 500 US satellites circling the earth at heights of between 1,200 miles and 22,000 miles”.

There has been speculation that the US and China having developed space based weapons such as Rods of God, which drops large rod-like projectiles from space with pinpoint accuracy and devastating results. The effects of such a weapon was depicted in the movie G.I Joe 2.

To understand what is being planned, I asked Corey Goode a number of questions. The following are his responses based on the intelligence he has gained from multiple military and secret space program sources.

MS – Can you describe what your sources had to say about SDI weapons being the ONLY way to attack hardened North Korean positions?

Some DOD reports estimate that 20,000 people could be killed in Seoul, South Korea per day if North Korea attacked with their artillery, rockets and mortars that are located in hardened bunkers just 35 miles from the DMZ (source).

Seoul has a population of 9.86 million people and is in range of most of NK’s conventional weapons systems. With Bunker Buster bombs and missiles becoming less effective in recent years the hardened bunkers where the NK Artillery is located has become too hard of a target for a conventional military strike. The loss of civilian life in Seoul was deemed unacceptable.

Some of my NATO sources have provided information to me that indicates that not only does the U.S. have these types of Space Based Weapons Platforms, so does China and Russia.

MS What kind of space based weapons exist that could be used against North Korea, e.g., Rods of God, Masers, etc?

Exotic Weapons Systems are located on Earth and in orbit. In the beginning, I would expect a number of EMP detonations over NK while at the same time “Rods from God” [RFG] projectiles would be released from orbit. It should be noted that North Korea has taken extreme measures to harden their bunkers and systems against EMP attacks.

Each RFG Platform releases 12 projectiles the size of telephone poles. These projectiles are made of Tungsten and are coated with ceramic and have a guidance system similar to the JDAM conventional bombs.

There are also a number of other weapons platforms that include High Energy Lasers and Masers as well as Particle Beam and Molecular Disruptor weapons. The triangular “TR3B like” craft have a number of weapons including a weapon that emit huge electro-plasmic energy bolts (like lightening) at their targets.

MS – Can you describe to what extent China has similar SDI weapons systems?

CG – China was able to obtain the plans to virtually every SDI (and later) weapons systems. They were spared the arduous and expensive R&D process and were able to engineer improvements in the designs that made their weapons much cheaper to develop.

MS – What do you think will be China’s response to the US using their SDI weapons against North Korea?

CG – Unknown. North Korea is thought to be a Cabal Asset by many. It is unclear if China will play a role at all in the defense of North Korea. The war would have to be prosecuted in a very particular way that keeps US Aircraft and Military personnel as far away from the North Korea/China boarder as possible. The US has most likely already disclosed its intentions regarding North Korea to some level authorities or secret societies in China and a tentative framework has been agreed to. This is speculation on my part. I know Trump likes to play things close to the vest. I am going off what has occurred between countries in the past according to information I received while in the programs.

MS – What role would be played by fleets of antigravity flying triangles operating out of places like MacDill’s Special Operations Command play in the attack on North Korea?

CG – I would think that they would fly sorties over North Korea positions and use a number of exotic weapons as well as higher tech conventional weapons (Rockets, Lasers & Mini-rail Guns). I’m sure they also gather electronic intelligence as well as jam certain technologies of the enemy. They would take out any enemy satellites and aircraft over the theater in the beginning of the attacks before more conventional air craft are sent in to clean up the non-hardened positions

MS – What role would MIC SSP space stations play in the attack against North Korea?

CG – I don’t know if the DIA/Air Force Space Stations would be used to coordinate the ground attack or not. The tasking of these satellite systems can easily be done from any location on Earth.

I know that the Triangle Craft and Space Station had been servicing these space based weapons to keep them operational. I would imagine they would be monitoring and maintaining these weapons systems from orbit as they were being used.

MS – Are the Directed Energy weapons systems to be used against North Korea, similar to what was used in the 911 attack that dustified the World Trade Centers as described by Judy Woods in her book, Where Did the Towers Go?

CG – Since being out of the projects I have heard that there was a space based weapon used in 911. I have no inside information on the 9/11 attacks from my own experience. The Molecular Disruptor Systems are known to turn complex structures into a super fine dust. This is a possible answer to your question, though I would be speculating.

MS –Are the Maser satellite technologies to be used against North Korea, the same ones used in the recent weather war attacks against the USA?

CG – It is possible. Now that NATO sources have verified that China (& Russia) have these weapons it opens up the possibility that countries that are a part of the “Earth Alliance” could be taking part in the weather war against the United States.

MS – Would the use of the SDI weapons lead to official disclosure of the MIC SSP?

CG – Yes, just as the F-117 Stealth Bomber/Fighter technology was disclosed to the public in 1989 after being used in the Panama war, some of the technologies used against North Korea would become public knowledge. I would think that they would then justify Space Based Weapons and disclose their Space Weapons and a new generation of Air Force air craft that can enter and leave the atmosphere at will.