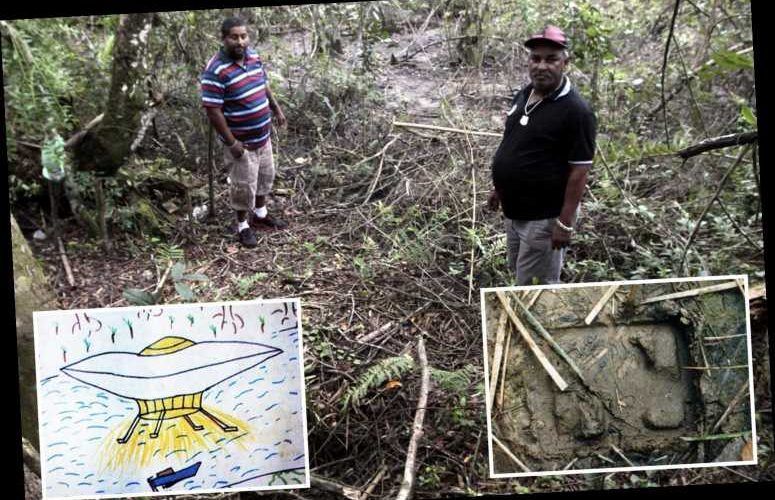 • On October 1st 1995, fishermen Fernando Beserra and Wilson da Silva Oliveira were gathering their nets into their boat along the Piacabucu River near the city of Santos, Brazil when they saw a brightly lit UFO with a “yellowish hue” over their heads, landing just a few meters away. Said Beserra, “On the lower part of the UFO there was a number spinning lights.” As the object passed over them, their boat’s engine stopped. Oliveira was so frightened that he hid in the bottom of the boat. Beserra watched the UFO rise again and move to a small island where it landed. The speed of the object convinced them it was not a balloon but something otherworldly.

• Beserra got the boat’s engine started again and they made their way home as fast as they could to tell their relatives about the incident. At dawn the next day, the two fishermen returned to the scene and found indentations in the soil and grass, flattened in a clockwise circular formation 18 feet in diameter. There were also four proportionately distributed marks from the object’s rectangular support legs, each measuring 10cm by 15cm and sinking 1.5cm into the soil. They believed the UFO was much heavier and may not have put all its weight into the soft ground.

• The fishermen reported their sighting to the newspaper The Tribuna in Santos. Experts from the National Institute of Aerospace Phenomenab immediately launched a probe and took plaster molds of the landing marks. Soil and vegetation samples were also taken. Traces of radiation were detected. Tests were also conducted showing that seeds planted in the soil sample from the burnt circle of the UFO germinated better than seeds planted in the soil taken just outside of the circle. It was clear to the researchers that the marks on the ground were not from conventional helicopters or aircraft. The Santos Military Air Base stated that it had no aircraft in the area at the time.

• The sighting was classified as a ‘Close Encounter of the Second Kind’, because of the marks and broken vegetation left on the ground, the electromagnetic effect it had on the boat’s engine, and the eye irritation and diarrhea later reported by the fishermen.

• Brazil’s leading UFO investigator Thiago Thichetti, who has been researching the phenomenon for more than 22 years, has written about the case in his new book UFO Contacts in Brazil. Thichetti says that the two fishermen “have constantly stuck to their story. …[T]here is little doubt in what they had to say.”

A UFO left strange landing marks on the ground and burnt the grass during a harrowing close encounter with two terrified fishermen in Brazil.

These photos, which have never been made public before, show the strange indentations in the soil and grass flattened in a circular formation.

Fishermen Fernando Beserra and Wilson da Silva Oliveira were gathering their nets when they saw the bright UFO land just a few metres away.

They thought it was a balloon at first, but when the speed of the object convinced them they were faced with something otherworldly.

According to the terrified witnesses, the UFO landed on an island called Ilha do Major, Soa Vicente, near São Paulo.

The UFO left marks on the ground and traces of radiation.

Fernando said: “When the light was over our heads, it changed direction and went to an a small island, where it landed.

“On the lower part of the UFO there was a number spinning lights.”

Wilson Oliveira added: “I almost died of fear. I hid in the bottom of the boat.”

The UFO had a yellowish hue and was so intense the two frightened fishermen tried to flee, but bizarrely they say their boat’s engine stopped as the object passed over.

Fernando said: “We made about ten attempts until the engine started and then we left as fast as we could.

“We could see that the UFO had landed on a small island located between us and the mangroves of the Piaçabuçu river.”

After the scare, Fernando and Wilson made their way back home to tell their relatives.

At dawn the next day, the two fishermen returned to the scene and noticed a circular mark where they believed the UFO had landed.