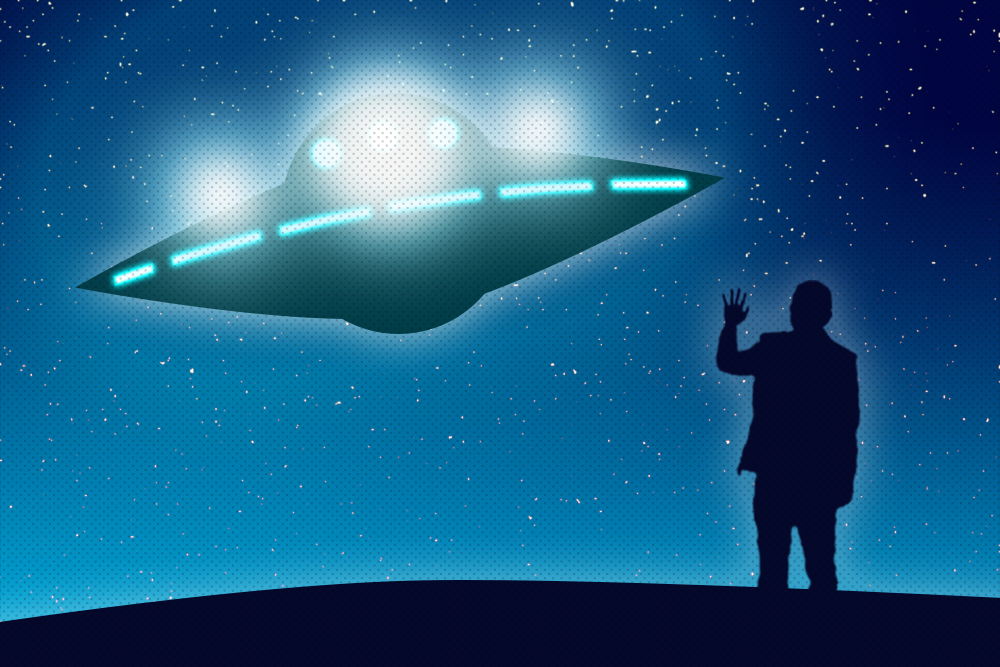 UFO/UAPs: The State of Play

• The UFO/UAP enigma presents a unique case in human history. Earth`s governments, religious organizations and scientific bodies seem to know no more about it than they did in the 1940s, even though they claim every now and then to launch an investigation only to close them on the grounds that nothing of value or substance has been found. What other unexplained multiple happenings taking place again and again during decades before millions of witnesses and often leaving material traces, in many countries, and yet remain a mystery?

• With the multiple statements from government-affiliated officials regarding their observations of vehicles and buildings on the Moon for which some provided photos and videos, and the persistent testimonies and visual proofs of US Navy jet close encounters with craft reportedly not from this Earth since 2004, reported on the New York Times and other major media and eventually confirmed by the US Navy and the Pentagon as being authentic, there is obviously something going on. The Pentagon has officially been monitoring UFOs at least since 2007 under a Congressionally funded program that still exists today. Recently retired high-ranking military and civilian Intelligence officers have devoted their lives and reputations to the disclosure of the UFO/UAP enigma. And more recently it was reported that the US legislators were informed that certain agencies and/or corporate entities are in possession of materials and substances of ‘non-terrestrial origin’ and not human-made.

• A number of high US ranking politicians and military officers have voiced publicly their awareness of the existence of UFOs after being briefed by scientists. But this public concern is only the latest in a very long series of official and public reports and statements that go back to the Second World War, if not much earlier. The lack of intellectual curiosity in the UFO phenomenon in modern times goes back to 1942 – the `battle over Los Angeles`; 1947 – the Roswell UFO crashes; and 1952 – the UFO fleets over the Capitol in Washington D.C. But behind the scenes, the UFO phenomenon has been a constant matter of concern at the highest levels of government and the military.

• The severely limited amount of unclassified data that has managed to see the light of day already proves without a doubt that there are advanced space-faring machines operated by superior forms of intelligent life, biological or `artificial`, circulating in our planetary environment. The US government has known about it for decades and has done all it could to deny or avoid officially recognizing it. Meanwhile, these craft enjoy complete freedom to operate in the atmosphere and under our oceans. These UAP craft frequently fly over army forts, navy bases, Air Force stations, ICBM silos, strategic defense headquarters, power plants, and even the residence of the US President. They sometimes jam the radars and command and control systems which is regarded as a technical impossibility by the system operators.

• The secrecy and cover up surrounding the UFO enigma has also rendered the scientific community inert, intimidated by the threat of losing their valued reputation within the scientific community by giving credit to the topic. Those who work on expensive mainstream projects looking for alien life in the cosmos tend to ignore any information provided by competent researchers and even military sources. They prefer the promise that some evidence of life on a remote planet will emerge in the next ten or twenty years.

• Rather than reveal to the public the truth, the powers that be still cling to an official denial of the very existence of the UFO phenomenon, which has seeped into our cultural norms, relegating it to a “fringe” topic. But in reality, governments have ascertained since the forties that there indeed are several `Alien` intelligent life forms in our ecosphere. They are so far ahead of our human species that we are entirely at their mercy. So profound a change this would make on our collective self-perception and our conceptions of the universe, life and mankind, the government felt it better to not reveal it to the people at large. Now they have hid it for so long that disregarding the legal requirement that the government should share relevant information with its citizens has become the norm.

• Perhaps some agreement was reached between the government and these Alien beings, with an exchange of knowledge and technology taking place for some good or service provided by the humans involved. Secrecy may have been a condition of the transaction in order to avoid unpredictable public interference. Multiple confirmed reports of human abductions by `Aliens`, sometimes supported by material evidence but apparently ignored by official authorities, over the last several decades, lend credence to the belief that governments are powerless to do anything about it or are complicit at some clandestine level.

• The evidence of an official policy of UFO secrecy cannot be ignored. Even the most garrulous high officials and heads of state have not made any positive statements about it. President Trump told his son in a television interview that he had learnt `some very interesting things` about what happened in Roswell, but declined to say what he knew. No person in a high position of any major country has stated in plain terms that he knows that UFOs are `extraterrestrial`, intelligently operated and pertain to a superior living system. All pronouncements in this connection are ambiguous, elusive and wrapped in doubt or humor. At their own peril, political leaders might say that they `believe in aliens” or that they have seen UFOS, but they will never affirm that there is evidence for their existence and `alien` nature. This is where the line is drawn between belief and awareness.

• In conclusion: The USA and some other major powers know a lot more than they let out on the matter of UFO/UAPs. They have evidently accumulated a lot of information and `know-how` since the end of the Second World War on this topic but have kept most of the world`s population in the dark while pretending every now and then to make efforts at investigating the mystery. Is this policy of denial and obfuscation masquerading as a lack of interest part of a larger plan? And who are the ‘unidentified insiders’ who are continually making these policy decisions, apparently keeping the ultimate secrets from heads of state and even the President of the United States?

A brief update on the matter of (so-called) Unidentified Aerial Phenomena which is now a regular feature in the major mainstream media is in order,. especially since it has been acknowledged by NASA that life appears to exists in the Venusian atmosphere and that it was in fact detected as far back as 1978.

No direct connection between this recognition, which follows decades of often acrimonious disputes about the presence of extraterrestrial microorganisms on meteorites the multiple statements from government-affiliated officials regarding their observations of vehicles and buildings on the Moon for which some provided photos and videos. and the persistent testimonies and visual proofs of US military close encounters with craft reportedly not from this earth since 2004, reported on the New York Times and other major print and audiovisual media and eventually confirmed by the US Navy and the Pentagon as being authentic (all those facts are documented in official documents and articles in major mainstream media, including the New York Times, the Wall Street Journal, CNN, NBC, Fox News etc…).

The coming to light of the existence of the Congressionally funded AATIP (Advanced Aerospace Threat Identification Program at the behest of then Senate majority Leader Harry Reid between 2007 and 2012, the foundation of the TTSA (To the Stars Academy) with the participation of high-ranking recently retired military and civilian Intelligence officers and the subsequent acknowledgment by the Pentagon that it maintains a UFO monitoring desk k are only a few of the many milestones on the road to the public disclosure that, among other data:
1-There are very advanced space-faring machines operated by superior forms of intelligent life, biological or `artificial` circulating in our planetary environment and at least one Government, the US Government, knows about it since decades and has done all it could until recently to deny or at least avoid recognizing and publicizing it.

2-The official information now available is that those craft enjoy complete freedom to operate in the atmosphere and under our oceans, arguably because of the inability of governments to control them with any of the means currently available. The craft also land every now and then and can usually not be intercepted or stopped.

3-Some of those crafts frequently fly over army forts, navy bases, Air Force stations and other sensitive and protected facilitiess such as ICBM silos, strategic defence headquarters, power plants, the residence of the US President and they sometimes jam the radars and command and control systems which in the words of some of the pilots and ICBM staff can be regarded as a hostile manoeuvers although they were apparently only intended for self-protection, On various occasions UAPs temporarily switched off the firing mechanisms of ICBM which is regarded as a technical impossibility by the system operators.

4-The Pentagon has been ordered by the US Congress`s Intelligence Committee in a directive as part of the Defence Authorization Act to provide within six months from July 2020 a report disclosing some of the hitherto classified information it has gathered about the nature, origin and objectives of the Unidentified Aerial Phenomenal. It is however to be noted that the delay granted and the virtual discretion given to the Military as to what information they will release indicate that not much new information may come out and most of the press echoed the official line about the fear that the UAPS may in fact be Chinese or Russian vehicles, which is an old but long discredited hypothesis intended to elude the real issue at hand.

5-A number of high US ranking politicians and military officers have voiced publicly their awareness of the existence of UAPS (Senators Marco Rubio, Mark Warner, Mark Walker among others) after being briefed by scientists from AATIP but this apparently new wave of concern is only the latest in a very long series of official and public reports and statements that go back to the second world war if not much earlier. This time however it is reported that the Legislators were informed that certain US agencies and/or corporate entities are in possession of materials and substances of non-terrestrial origin and not human-made.
Even if we discount the historical records that allude to observations of and encounters with `alien` or strange craft and beings that take us back hundreds of years and possibly millennia, the series of confirmed events that took place between 1942 (the so-called `battle over Los Angeles`) and 1954 (the Roswell UFO crashes and retrievals in 1947, the UFO fleets over the Capitol in Washington D.C. in 1952), the press conferences by top US Army, Air Force and Navy Commanders, the multiple government-commissioned investigations et al. prove that the UAP (formerly UFO) phenomenon has been a constant matter of concern at the highest levels along the last several decades. Long spells of official silence and dismissal have been periodically interrupted by waves of statements usually pleading ignorance while admitting the reality and the outlandish nature of the incidents but always stopping short of affirming their non-human, extra-planetary character.