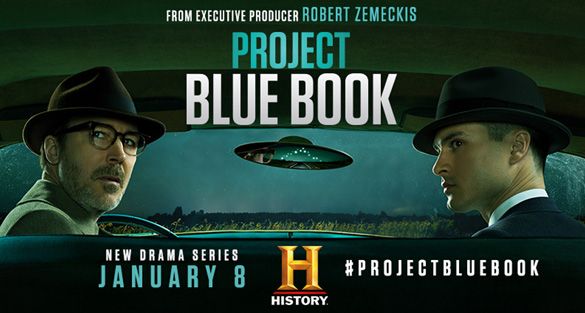 Project Blue Book: Season 2 Will Be About Peeling Back the Layers

• The first season of the History Channel/A&E’s hit show, “Project Blue Book”, ended with a thrill-ride finale entitled: “The Washington Merry-Go-Round”. After the July 1952 ‘lights over Washington D.C.’ events, and Quinn’s dogfight with these luminous objects, Hynek sells out Quinn, telling a government committee that Quinn’s account of chasing real UFOs was actually his hypoxic dementia brought on by the high altitude flying as he was only chasing the atmospheric effects of temperature inversions. But this was a tactic used by Hynek to allow them to continue in their UFO research for Season 2, free from the scrutiny of the government and the Air Force.

• What is most interesting is at the end of the episode, the Man in Black a.k.a. “The Fixer” is shown in Antarctica in front of what might be an extraterrestrial obelisk. This indicates that season 2 of Project Blue Book will delve into the mystery surrounding Antarctica after World War II. After the war, both the Americans and the Soviets had intel that the Nazi’s had established a base on Antarctica, and were possibly reverse engineering UFO technology. So they each established their own “research” bases there to study “electromagnetic, geological, hydrographic and meteorological conditions” in the area. While the Germans did explore Antarctica, Popular Mechanics debunked the theory of a Nazi base in Antarctica.

• But by setting the very last scene of Project Blue Book in Antarctica, the show’s writers are tapping into the mythology that surrounds the continent. Think of it as a point of origin in which to start Season 2 of the series. According to showrunner Sean Jablonski, “We want to get people excited that we’ve expanded the mythology and get them curious as to what that allows us to do in terms of peeling back the layers of the larger cover-up going on next season.”

• The show’s writers will depict the transition from the Truman to the Eisenhower Presidential Administrations. Also, the CIA will basically take over for Air Force generals Harding and Valentine, but not without a power struggle.

• Groom Lake or Area 51 will probably come into play because the CIA will be explaining the UFOs in the skies not as alien spacecraft but experimental military aircraft tests. Jablonski even hints that Roswell and the Maury Island incident will be two of the case files explored in the upcoming season. In 1947 near Maury Island, Washington (state), two harbor patrolmen were on their boat when they were surrounded by 6 UFOs. One of the craft started ejecting a “white metal” substance onto the vessel which resulted in a man breaking his arm and a dog being killed.

• It sounds like Sean Jablonski and his writers have another outstanding season of Project Blue Book planned for viewers.

• [Editor’s Note]   Those who follow Dr Michael Salla and this ExoNews website know that there is ample evidence for the existence of a Nazi base, as well as other extraterrestrial bases, under the Antarctic ice despite being “debunked” by Popular Mechanics magazine. There are many Deep State operatives who would still like to keep this information a secret.

Project Blue Book had an incredible season one finale. From the first frame to the very last one, it was a sitting-on-the edge-of-your-seat kind of thrill ride.

The Washington Merry-Go-Round episode proved that the truth is out there and Hynek and Quinn are going to do whatever it takes to find it. Even if it means a little bit of deception on their part.

It took the last episode and Michael’s dogfight with the UFOs to make him finally believe. While it may have seemed like Allen sold him out with the temperature inversions and hypoxic dementia (lack of oxygen to the brain brought on by the high altitude flying) theories, in fact, he did just the opposite.

By lying to the committee, he actually removed them from constant scrutiny. Freeing them to receive more case files and more research to prove what they already know. We are not alone.

When the Man in Black a.k.a. The Fixer appears in Antarctica in front of the obelisk, it may appear that he is sending a signal to the aliens. After all, in the voiceover when Hynek calls Quinn he tells them they are about to make “real contact.”

Showrunner Sean Jablonski in an interview with Entertainment Weekly says it isn’t what we think. Let’s give a little background into why M.I.B. was there in the first place. If you watch the series Ancient Aliens, this isn’t going to be new information.

During World War II, the U.S. ended up in Antarctica alongside the Russians establishing bases for research. We wanted to keep an eye on each other but most importantly, we believed that the Nazi’s had a secret facility there for weapons testing. It was also rumored that they were reverse engineering UFO technology.

The official name for our mission was Operation Highjump. At the time, we were establishing a base called Little America IV. The idea was that we would study “electromagnetic, geological, hydrographic and meteorological conditions” in the area.