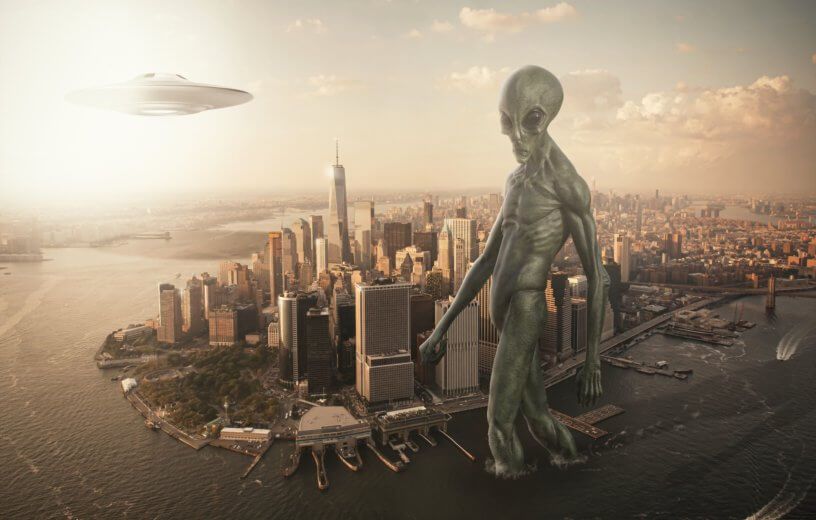 • If the Earth is invaded by advanced, hostile extraterrestrial beings, Clifford N Lazarus believes that we Earthlings will need to come together to prevail. Lazarus, the clinical director of the Lazarus Institute, wrote in Psychology Today: “It is critically important that we find a way to create a coordinated, global response to this mortal peril because it will almost inevitably not be the final pandemic our world will face. Without rational, scientifically guided and cooperative, multinational leadership, “ET” will prevail and human civilization as we know it will be doomed.”

• Lazarus also says that an alien invasion is very similar to a pandemic outbreak, where humans should unite as a single species irrespective of various barriers. “If ever there was a time for joining forces and pulling together as a nation, a global community and a single species, this is it,” says Lazarus. “COVID-19 does not recognize national borders or social boundaries. It will infect and possibly kill anyone regardless of nationality, race, religion, gender, sex, age, education, wealth, social status, or political affiliation.”

• Investigative journalist Leslie Kean recently suggested that alien hypothesis could be the best option to explain UFO sightings. (see ExoArticle here)  “The extremely advanced technology that the objects have displayed since the 1950s… demonstrate tremendous speed and accelerations, the ability to make sharp right-angle turns, stand still in midair, zoom off and disappear in the blink of an eye, and operate underwater. They appear to defy the laws of aviation as we know it since they have no wings or visible means of propulsion.” Many believe that (some) UFO sightings are authentic proof of alien existence and their presence here on Earth to ‘monitor human activities’.

• [Editor’s Note]   They’re here, and they’ve been here for a very long time – both the ‘bad’ ETs who have turned the Earth into a slave planet using mind control over our leaders and the media, and the ‘good’ ETs who watch our species from a distance, assisting us through our consciousness. This struggle has escalated since WWII when we reached a level of technological development that made us more valuable and susceptible to the ‘bad’ ETs’ agenda of domination. We have now reached the culmination of this cosmic struggle for planet Earth, where we will need to either awaken to the ET reality and take control over our own sovereign future, or accept our species’ fate as servants to an elite human class and their deep state henchmen doing the bidding of an evil extraterrestrial race.

Many space experts believe that humans are not alone in the universe, and they claim that advanced alien species might be living somewhere in the deep nooks of the universe.

If these advanced beings are now searching for life in the universe, there are possibilities that they could find earth, and we cannot rule out a possible invasion in the future.

Will Earth Face Doomsday Due to Alien Invasion?

Clifford N Lazarus, the clinical director of the Lazarus Institute believes that the earth will be doomed if hostile aliens visit earth. He also added that multi-national leadership should prevail in the world if humanity wants to fight against a common enemy.

“It is critically important that we find a way to create a coordinated, global response to this mortal peril because it will almost inevitably not be the final pandemic our world will face. Without rational, scientifically guided and cooperative, multinational leadership, “ET” will prevail and human civilization as we know it will be doomed,” wrote Lazarus in his recent article published in Psychology Today.

Aliens the Latest Pop Culture Trend in Television and Movies?

• Today, there is a general acceptance of sentient life beyond our planet. There is no denial of that unless you’re naive about the sheer size and space of our never-ending universe. But instead of fearing an invasion of alien species as in the past, now we are actively seeking them out. Thus our media and storytelling has transformed as well when it comes to aliens.

• In the distant past, primitive humans recorded UFO and extraterrestrials sightings with petroglyphs and cave art. The Puritans were among the first Europeans in America to see them. During the 1900’s, aliens were scarier to us because they represented a vastly evolved technological civilization.

• But today, aliens represent our ascent and ownership of advanced technology and cyberspace. Our world has transformed and therefore so has our lore and our urban legends. As our own technology has evolved, it appears that the number of reported sightings and abductions, and the fear of them, have diminished.

• [Editor’s Note]   This is the simplistic view of the modern mainstream philosopher. We feared the unknown in the past, and that manifested our collective fear of UFOs and extraterrestrials. But today we are used to advanced ‘space age’ technology and we no longer fear extraterrestrial technology, and therefore the UFO/ET threat is gone. Problem solved. This goes out of its way not to address the very existence of UFOs and our continuing interaction with extraterrestrials, and alludes that UFOs and ET are somehow not real. This discussion is meant to side-step the issue and keep a mind-controlled public in a state of blissful ignorance. It is time that our society woke up and addressed the ET issue head-on, and not through editorials suggesting that our perception of the VERY existence of UFOs and extraterrestrials is merely a societal reaction depending upon our species’ level of technological development.

When was the first time you learned about aliens? I remember being fascinated by the idea of their existence when I was younger.

First I was exposed to E.T. and then I would spend hours googling different stories of UFO sightings and encounters. I would pretend blips in the night sky were alien spacecrafts instead of boring airplanes. They permeated our culture, we have always had a fear and fascination of what lies beyond our small (in the grand scheme of things) place in the universe.

Of course, UFO sightings have been part of our history for thousands of years. The Puritans were some of the first known Americans to see them. But there were signs of primitive humankind having their own theories about extraterrestrials too, with petroglyphs and cave art being found as evidential relics of prior beliefs.

1940 UFO sightings were far different than the UFO sightings and stories we hear about today; they evolve along with humankind. Aliens were scarier to us in the 1900s because they represented a vastly evolved technological civilization. As our technology has evolved, alien sightings have become more scarce.

The Smithsonian featured a fascinating article by writer Greg Eghigian about how UFO reports have evolved with the technology of the times.

“Flying saucers” weren’t actually common until the post-war hysteria, fear of Russian entanglement in American space and rocket experimentation manifested these visuals and terrors of foreign weaponry. Prior to the 1940s, alien sightings were more celestial in nature and less about the technological component.

I believe, today, aliens represent our ownership of technology. It explains why people used to fear abductions and invasions. Many sightings (research specific cases) were people afraid their bodies would be used to conduct experiments. People were afraid of modernization and the growing eye of big brother.