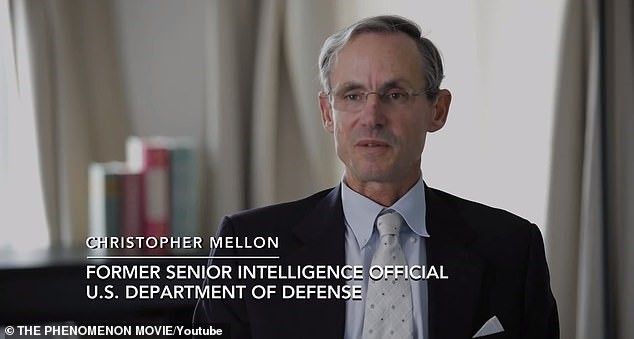 • A documentary film by James Fox, The Phenomenon, released on October 6th has reignited the fire in the UFO community with firm confirmation of the government’s knowledge of still-unexplained ‘Unidentified Aerial Phenomenon’ (UAP), more commonly known as UFOs, Along with some new information as well.

• In the documentary, former Deputy Assistant Secretary of Defense for Intelligence, Chris Mellon (pictured above), explained how came to possess the three infamous Navy UFO videos. The 63-year-old Mellon said that unnamed Defense Department official met him in a Pentagon parking lot and handed Mellon a package with the three UFO videos captured by Navy pilots in 2004 and 2015. Mellon tells the filmmakers, “This is a case where somebody bent the rules a little bit, and they did so for the larger good, and we’re absolutely all better off because of it.”

• The three videos were the ‘Tic Tac’ UFO seen by Navy pilots off of San Diego in 2004; an anomalous UFO rotating while in flight and a small UFO darting across the water below, taken by Navy pilots off of the East Coast in 2015. Nimitz carrier pilots Commander David Fravor and Chad Underwood both saw the Tic Tac UFO on November 14, 2004. In the January 21st, 2015 video of the small UFO darting across the Atlantic Ocean, a Navy pilot is heard to remark, “what the fuck is that thing?” as it passes below him. (click link NY Times ExoArticle below to see the three Navy videos… again.)

• Mellon shared the videos with Luis Elizondo, the former head of the classified Pentagon UFO program called the ‘Advanced Aerospace Threat Identification Program’. (The two men had moved on from government work to become colleagues in “To The Stars Academy of Arts and Sciences’, formed in 2017 to investigate and promote UFO data.) In late August of 2017, Elizondo worked with the Defense Office of Prepublication and Security Review to have the three videos declassified.

• On October 4, 2017, Elizondo and Mellon had a meeting with New York Times journalist, Leslie Kean, who also appears in the documentary. Kean was informed by Elizondo about the about the secret Pentagon UFO program, and Mellon showed her the UFO videos on his laptop. This information went on to form what would become the bombshell NY Times article of December 2017 (see ExoArticle here) Kean said she ‘knew this was breaking news for the front page of the New York Times as soon as Mellon informed her about the clips’ existence.

• The Pentagon’s ‘Advanced Aerospace Threat Identification Program’ (AATIP) was conceived in 2007 by former Senate Majority Leader Harry Reid, and morphed into the ‘Unidentified Aerial Phenomenon Task Force’, under the Office of Naval Intelligence, after 2012. Apparently, for over a decade, the Pentagon has been conducting classified briefings for Congressional committees, aerospace company executives and other government officials. The briefings were centered on sightings, video footage, and radar logs by military pilots of ‘unexplained aerial phenomena’ which seemed to transcend existing flight technology – such as an aircraft with no visible engine at 30,000ft, traveling at hypersonic speed.

• The Department of Defense officially released the videos in April this year, nearly two-and-half years after the NY Times report, in order to ‘clear up any misconceptions’ about the video’s veracity. “The aerial phenomena observed in the videos remain characterized as ‘unidentified’,” the department said.

• ‘The Phenomenon’ analyzes the history of UFO sightings in the US since the 1940s. In the film, Senator Reid claims that the US government has been hiding key details about UFO encounters from the public for years. ”Why the federal government all these years has covered up …everything, stopped it, I think it’s very, very bad for our country.” Reid says that most of the government’s evidence of UFOs still “hasn’t seen the light of day”.

• Reid, however, stops short of confirming other-worldly activity, tweeting in August that “we must stick to science, not fairy tales about little green men”. In the film, Reid tells Fox, “Nobody has to agree why [the UFO phenomenon is] there. But should we at least be spending some money to study all these phenomenon? The answer is yes.”

• The documentary film also goes into the US military’s investigation of UFOs in the late 1940s, as sightings of UFO discs began cropping up in mainstream news reports. The Air Force investigated over 12,000 UFO sightings, ‘explaining’ all but 701 of them. One of those unexplained incidents occurred over Malmstrom Air Force Base in Montana in 1967. Ten ICMB missiles situated underground beneath the base suddenly become inoperative. Similar sightings and results were also reported at nuclear sites in the former Soviet Union and in Great Britain.

• Robert Jamison, a retired USAF nuclear missile targeting officer, told of several occasions having to go out and ‘re-start’ missiles that had been deactivated, after UFOs – mysterious glowing red objects in the sky – were sighted nearby. “If they had been called upon by the President to launch, they couldn’t have done it.”

Former Deputy Assistant Secretary of Defense for Intelligence, Chris Mellon, has revealed that he was the

source who provided the New York Times with the three UFO videos it famously published in 2017.

Mellon, who served in the senior intelligence role under the Bill Clinton and George W. Bush administrations, made the bombshell admission in a recently released documentary, The Phenomenon, which is directed by James Fox.

The 63-year-old told Fox that he met with an unnamed individual in the parking lot of the Pentagon months earlier and was handed a package containing three videos of ‘unexplained aerial phenomena’ captured by Navy pilots between 2004 and 2015.

‘I received the videos, the now famous videos in the Pentagon parking lot from a Defense Department official. I still have the packaging,’ Mellon is heard telling the filmmakers. ‘This is a case where somebody bent the rules a little bit, and they did so for the larger good and we’re absolutely all better off because of it.’

revealing articles about UFOs in recent years.
One of journalists who worked on the story, Leslie Kean, also appears in the documentary.

Kean said she ‘knew this was breaking news for the front page of the New York Times,’ as soon as Mellon informed her about the clips’ existence.

Though at the time the government said the program, secretly commissioned in 2007, was shuttered due to a lack of funding in 2012, the Times later confirmed it continued its existence under a new name, the Unidentified Aerial Phenomenon Task Force, within the Office of Naval Intelligence.

For more than a decade, the Pentagon had been conducting classified briefings for congressional committees, aerospace company executives and other government officials.

The briefings were centered on sightings, video footage, and radar logs by military pilots of ‘unexplained aerial

phenomena’ which seemed to transcend existing flight technology – such as an aircraft with no visible engine at 30,000ft, traveling at hypersonic speed.

The first of which, known as the ‘Tic Tac’ incident, was captured by F-18 pilot Chad Underwood off the coast of San Diego on November 14, 2004.

The Tic Tac UFO – so-called because of its rounded shape and white color – was spotted by Underwood flying erratically over the Pacific Ocean.

‘It was going from like 50,000 feet to 100 feet in like seconds, which is not possible,’ Underwood said back in December 2019, breaking his 15-year silence over the encounter.

To this day, officials still have no idea what the recorded object was, with weather phenomenon, man-made craft and birds having all since been ruled out.

Two other videos recorded on January 21st, 2015, were also released.