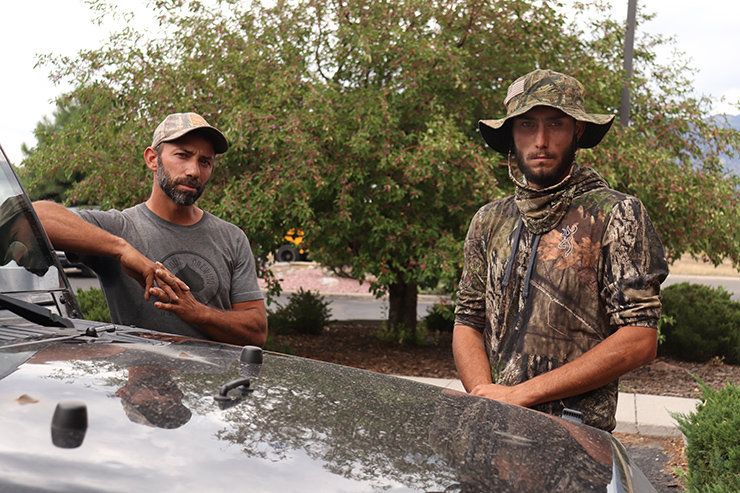 A Taos Close Encounter of the Hunters and Aliens Kind

• Bow hunter Josh Brinkley (41) of Santa Fe, New Mexico (pictured above left with his friend Daniel Lucero) often hunted for elk at Cerro de la Olla, also called “Pot Mountain”, near Ute Mountain in the Taos Plateau Volcanic Field in northern New Mexico. Brinkley has hunted the area for fifteen years. Brinkley’s friend and co-worker Daniel Lucero (26) had never been up to Pot Mountain. So they both went to scout the area a couple of days before the September 1st start of elk bow-hunting season.

• On September 1st, 2019, the two men set up along the tree line on different sides of a field and waited. By 9:30 am Brinkley got restless and began walking through the woods looking for elk. He walked up the mountain to the crater-caldera at the top of the collapsed volcano and stood at the southwestern side of the crater’s edge. Brinkley then noticed two tall figures standing side by side about 35 yards away, staring at him. Brinkley walked around a bush, looked again, and they were gone.

• Brinkley described the figures: “The shape that would be like their heads, it looked like they had huge hoods on. It looked like two ribbons coming off either side to a point at the top and bottom (like a banana). The right side was black, left side was white and a little shiny. Torsos were kind of black, I couldn’t see many details. It definitely looked like clothes. In middle of the oval was just gray.”

• Brinkley went back to where Lucero was still waiting. Brinkley told Lucero that he’d seen a couple of hunters who probably scared off the elk. He didn’t mention the men’s strange appearance. Said Brinkley, “I was a little weirded out.” Once they reached their campsite, Brinkley finally told Lucero what he saw. “I told him what I saw was weird. They were too tall, their heads were too big to be hunters,” said Brinkley. “Anyone who knows me knows I don’t tell these weird stories.”

• On September 2nd, they again set out in the morning looking for elk. But they couldn’t figure out why there weren’t any in the area. At 2:30 in the afternoon, they drove their Jeep to the other side of the mountain but saw no signs of wildlife or anyone who might scare the animals away. Suddenly they saw what they thought was a movie production base camp. They are both employed as builders for movie sets. Brinkley described what they saw: “It’s this big tent structure, like a circus tent, 50-60 feet tall. Coming off the left of it was this long building, almost like what you would build for an archery lane for target practice. It was a third the height, but really long, maybe a couple hundred feet.”

• They were about a quarter mile away and couldn’t see the bottom of the structure. They watched it for about a minute as they drove. Driving around trees, they lost sight of the structure for five seconds, Brinkley said. “When we topped the hill, it was gone. Just gone.” Lucero said, “There was no dust, there was nothing.” The men drove around the area searching until dark, but found nothing.

• When they reached a place with a cell phone signal, they contacted Peter Davenport, the longtime executive director of the National UFO Reporting Center in Washington state. Davenport called the incident “profoundly unsettling.” Davenport said that of the thousands of calls he gets every year about alien sightings, they rarely describe seeing aliens on the ground. Brinkley and Lucero said they weren’t drinking and weren’t on drugs. After listening to some 350,000 phone calls over 25 years, Davenport thinks he can tell those that are credible. This was one of them.

• Brinkley said he didn’t believe in UFOs, but “I sure do now.” “People probably think we are insane.” Lucero said he doesn’t know about aliens. “I just know I’ve never seen anything that big just disappear.”

They had a strange tale to tell and they weren’t sure of their reception.

“We’re a couple of guys that don’t believe in much, but we believe now,” Brinkley said.
They went hunting for elk.

They encountered aliens or something else so strange they don’t know what to call it.

Brinkley, 41, said he’s been going to the Pot Mountain area hunting for 15 years. He had never seen anything particularly odd.

He said he works construction and on movie sets. He’s a family guy who doesn’t want anyone to think he’s crazy.

He and Lucero have worked together for eight years.

They say they aren’t prone to seeing things and didn’t particularly believe in aliens.

Opening morning of bow hunting season was Sunday (Sept. 1). The two men had gone a couple of days early to scout the area for elk. Lucero, 26, had never been there.

They set up along the tree line on different sides of a field and waited. After three hours and no elk, Brinkley became restless. It was about 9:30 a.m.

“I take off walking, creeping around through the woods, looking for elk,” Brinkley said.

He reached the top of the mountain where there’s a caldera, a kind of wide bowl left behind by a collapsed volcano. He went to the edge on the southwest side. As he walked to the edge he noticed two figures on his side of the caldera. He thought at first they were hunters. But, they were “very tall shapes of these beings, standing side by side, staring right at me,” he said.