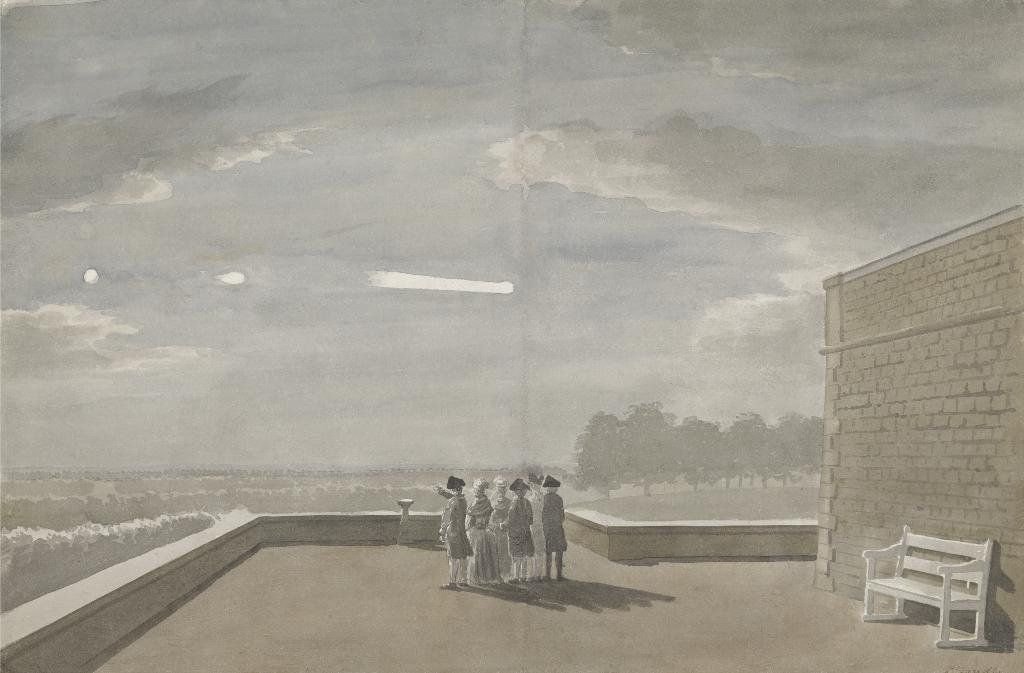 • On August 18, 1783 at around 9pm, townspeople in Berkshire (in south-central England) watched “flashes of light on the northern horizon” followed by a “roundish shiny object” as big as “half the width of the moon”. It started off still, but then began to move and became brighter. It became oblong-shaped and so bright it “illuminated the whole landscape”. Then the object developed a tail and “several luminous bodies, each with its own tail.” Then they disappeared. Reports say that, ten minutes later, witnesses from Shetland to Brussels saw the sphere become elliptical (egg-shaped) and repeatedly changed between the two shapes, high in the sky and traveling at an incredibly fast speed.

• According to a book by Duncan MacKay entitled, Bizarre Berkshire, the common explanation for the UFO was that it was a very bright meteor. But witnesses said it was travelling parallel with the earth, rather than hurtling towards it. Also, no crater was ever found.

• One witness, Tiberius Cavallo, wrote about the sighting: “It is certain of between 9.15pm and 9.30pm that night a very bright meteor, having entered the earth’s atmosphere over the open waters of the North Sea, passed along the whole eastern coast of northern Scotland and England.” Of course, in 1783, no one had ever heard of an extraterrestrial UFO craft.

• In 1783, photography was years away. A painter and Royal Academian, Paul Sandby did draw the scene for posterity. (see etching above) The incident was documented by the group of people who watched from Windsor Castle in Berkshire.

The modern world is littered with reports of UFOs.

Barely a day goes by without someone claiming they’ve seen a flying saucer as they reclined their seat in business class, or gazed into the skies above Bracknell, for example.

Tales of eerie happenings in the sky are tenfold, and most of the time are met with scepticism or, at the very least, a raised eyebrow.
Sightings have been commonplace since man took to the skies. But did you know the first recorded UFO sighting came way before the miracle of flight?

And did you know it was spotted in the skies above in Berkshire?
The brilliant book Bizarre Berkshire by Duncan MacKay, available from Reading’s Two Rivers Press, takes us way back to 1783 to tell the tale.

Photography was years away in 1783 and so the first sighting of a UFO had to be etched. It was created by painter and Royal Academian Paul Sandby after an extraordinary incident in Windsor.

It happened on August 18, at around 9pm.

People across Britain claimed to have seen it, but it was Sandby, his brother Paul, Tiberius Cavallo, Dr James Lind, Dr Lockman and two unknown women, who were in Windsor Castle at the time, who were able to document it.