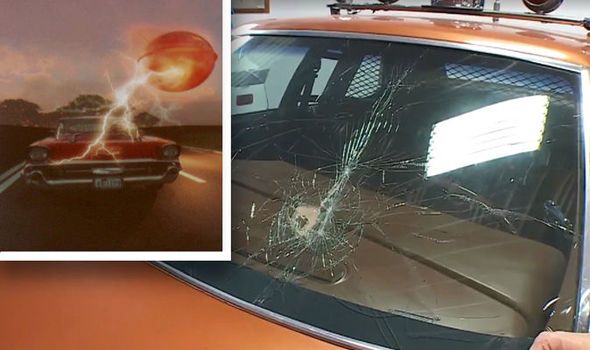 • August 27th marks the 40th anniversary of “The Marshall County Incident” when in 1979, Marshall County deputy sheriff Val Johnson had a mysterious encounter that some have called one of the Top 10 most significant UFO encounters ever recorded. Marshall County is located in Northwest Minnesota near the North Dakota and Canadian borders.

• At the time, the Marshall County Incident drew national attention to a town of only 1,500 residents. Today, the county commemorates the incident with a museum and a festival featuring a re-enactment, an interview with the original sheriff’s radio dispatcher involved in the incident, a costume contest, live music, and appearances by several ufologists.

• In 1979, deputy sheriff Val Johnson, age 35 at the time, had been with the Marshall County Sheriff’s Department for almost three years. In the early morning of August 27th, he saw a bright light in the sky visible for miles across the flat prairie. Thinking it could be an aircraft from the nearby Air Force base in Grand Forks, N.D., he drove toward it to investigate. Johnson said he saw a bright light about a foot in diameter hovering about 3 feet off the ground. Suddenly the light “went at” him and white light engulfed his squad car.

• Forty minutes later, Johnson woke up. His eyes and face were burned and he had a lump on his forehead. The windshield on Johnson’s squad car was cracked in a spiderweb pattern.  There was a hole in one of his red flashers and a dime-sized dent in the hood. Two antennas were bent. Both the electric clock in his car and his windup Timex wristwatch had stopped for 14 minutes. At 2:19 am, Johnson radioed in to headquarters saying, “Something just hit my car… It wasn’t a vehicle. I don’t know what the hell it was.”

• The County Sheriff Dennis Brekke called in experts to investigate. A Honeywell engineer speculated that the deputy had encountered “a highly charged electrical ‘thing’ with enough mass and momentum to create the effects.” The investigation was closed without reaching any conclusions.

• Johnson is now 75.  He has given dozens of interviews and has appeared on the TV show “That’s Incredible”. But Johnson has declined further interviews and has rarely spoken publicly about the incident. Said Johnson, “For the first three years, it was on my mind daily. After that I went on with my life.” “This is what happened to me. If you choose to believe, great. If you choose not to believe, that’s OK, too.”

Sounding groggy but calm, the Marshall County deputy sheriff radioed in from his patrol car at 2:19 a.m. on a lonely country road in northwest Minnesota.

“Something just hit my car,” said Val Johnson. “I don’t know how to explain it. Strange. … Something attacked my car.”
He’d seen a bright light in the sky, he said, visible for miles across the flat prairie, and drove toward it to investigate.

Fellow officers listening in quickly got on the radio and began speculating about what had happened. Perhaps he’d been hit by a small car, one suggested.

Four decades later, nobody else knows what the hell it was, either. But that won’t keep Warren from celebrating the biggest mystery to hit this town as far back as anyone can remember.

Tuesday marks the 40th anniversary of Johnson’s brush with a UFO, which drew national attention to this town of 1,500 residents near the North Dakota border, some 320 miles northwest of the Twin Cities. The incident has been called one of the Top 10 most significant UFO encounters ever recorded.

The county historical museum, where Johnson’s rust-colored Ford LTD squad car is the star attraction, will host a presentation featuring a re-enactment of his radio call that night. Several ufologists will be on hand, as well as the dispatcher who spoke with Johnson that night.

There will be an alien costume contest for the kids, and the Jensen Sisters from Thief River Falls will perform their original song “The Marshall County Incident.”

Sherlyn Meiers, the museum director, says interest in the event has been strong.

“I have been getting phone calls almost every day for the past month,” she said. “Maybe we’re gonna have a bigger crowd than we thought.”

The light ‘went at’ him

Johnson, 35 at the time, had been with the Marshall County Sheriff’s Department for almost three years. Quiet and well-respected, he’d been making a routine patrol on rural roads when he saw the light in the night sky, just across the Red River from Grafton, N.D. He wondered if it might be an aircraft from the nearby Air Force base in Grand Forks, N.D.
Johnson drove toward the light. The next thing he knew, some 40 minutes later, he woke up. His eyes and face were burned — doctors later described them as welder’s burns — and he had a lump on his forehead.