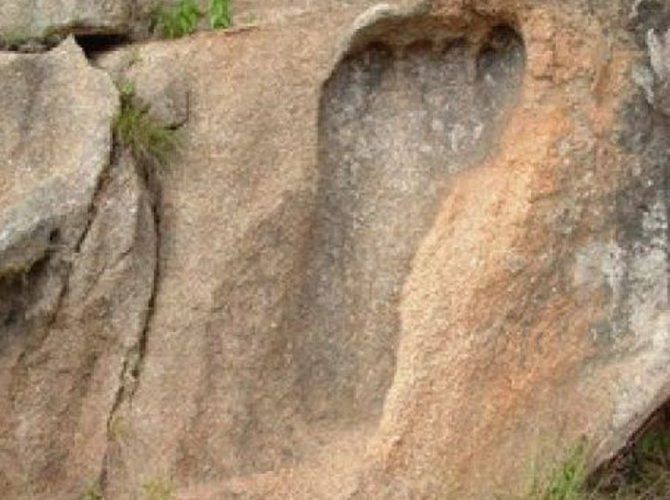 • The evidence that giants once roamed our planet is overwhelming.

• Michael Tellinger shows a giant footprint in granite rock in South Africa in a video.

• Ancient writings refer to giants including the Vedic in India and the Old Testament Bible which refers to Nephilim.

• In an ancient mound in West Virginia, researchers found numerous giants up to nine feet tall, decorated with copper bracelets and other items.

• “The eyes of that species of extinct Giant, whose bones fill the Mounds of America, have gazed on Niagara, as ours do now.” – Abraham Lincoln, 1848

• Is modern science more interested in learning the true history of our planet, or in debunking and covering up the truth? “We live in a world of secrecy, where information is concealed to protect the status quo.”

Below is a video of Michael Tellinger showing the world close-up video footage of what appears to be a giant footprint that’s been etched into granite rock in South Africa. This video has been circling the web for a few years now, and despite all of the efforts to debunk it, continues to hold strong. It’s simply too difficult to believe that the granite would take on this shape through simple erosion.

Who is Michael Tellinger? He is a renowned author and politician who has made several groundbreaking discoveries regarding lost ancient civilizations that once roamed the Earth. His research focuses on the southern tip of South Africa, and his analytical and scientific approach to his work has attracted many. He’s lectured in various parts of the world and has produced some remarkable evidence that’s forcing us to consider the true origins of humanity and our ancient history. Now considered an international authority on the origins of humanity and the lost civilizations of southern Africa.
Although this footage is a couple of years old at this point, it remains fascinating to think about and is worth sharing with those of you who have yet to come across it.

Even if you are not impressed by the above video, it’s difficult to debunk the belief that giants once roamed our planet. The evidence is quite overwhelming.

The writings of ancient civilizations and various religious texts have all mentioned the existence of giants. One example, out of many, are the Nephilim, found in the Bible. Ancient Vedic literature also mentions giants. Considering how modern day science continues to play catchup with ancient teachings, it’s worth considering the idea that they were right about giants, too.

Apart from the footprint you see above, there are many examples of physical evidence. One great example is part of an upper leg bone with a hip joint of a giant that would have stood about 12 feet (3.5 metres) tall. This bone has been in the vaults of the medical school at WITS University, Johannesburg, since the early 1960s, when it was found by miners in northern Namibia. It is one of the most precious and rare specimens available today that clearly indicate the existence of giants in Southern Africa more than 40,000 years ago.

“The eyes of that species of extinct Giant, whose bones fill the Mounds of America, have gazed on Niagara, as ours do now.”
– Abraham Lincoln, 1848

Another great example of giant humanoids comes from 1883, when the Smithsonian, a United States government and military-led organization, dispatched a team of archaeologists to the South Charleston Mound. The report indicates that the team uncovered numerous giants ranging from seven to nine feet tall. They were decorated with heavy copper bracelets and other religious/cultural items. The report also indicated some of them had a skull that was of “the compressed or flat-head type,” which is a skeletal characteristic similar to those found in South America and Egypt.

Another example comes from 1774, when settlers found what they called “The Giant Town,” which housed several gigantic skeletons, one being an eight foot tall male.

For more examples, I suggest you start with an article written by Richard Dewhurst, the source for the above examples. He’s the Emmy Award–winning writer of the HBO feature documentary Dear America: Letters Home from Vietnam. A graduate of NYU with degrees in journalism, film, and television, he has written and edited for the History Channel, the Arts & Entertainment Channel, PBS, Fox Television and Fox Films, ABC News, TNT, Paramount Pictures, and the Miami Herald. He, like Tellinger, is extremely well researched.

In his article, he writes:

In addition to the human skeletons found in NY State, there is also the famous case of “The Cardiff Giant,” a white alabaster-like statue of an 11-foot man which showed an exposed penis and hieroglyphic inscriptions. This statue caused a world-wide sensation and was exhibited in New York City to thousands of paying customers before it was declared a fake by the NY newspapers, despite the fact that scholars from Harvard and elsewhere insisted that the statue was genuine.