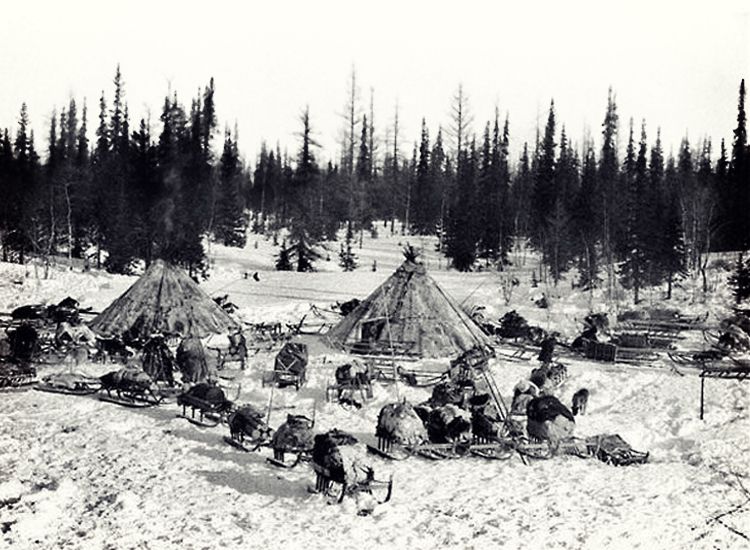 More Stories About the “Star People” Shared by American Indians

• Continuing to report the work of Dr. Ardy Sixkiller Clarke, a Professor Emeritus at Montana State University who is Cherokee/Choctaw Native American. Dr. Clarke was told the legends of extraterrestrial “Star People” by her grandmother. She has been collecting encounters between these ETs and Native Indians for many years, which she has compiled in her book: Encounters With Star People, Untold Stories of American Indians. “My people tell of Star People who came to us many generations ago,” says Dr. Clarke. “The Star people brought spiritual teachings and stories and maps of the cosmos and they offered these freely. They were kind, loving and set a great example. When they left us, my people say there was a loneliness like no other.” Here is another such story.

• In 1930, a fur trapper named Arnaud Laurent and his son were traveling near Lake Anjikuni in northern Canada when they saw a ‘cylindrical or bullet-shaped’ aircraft crossing the northern sky. Shortly thereafter, another trapper, Joe Labelle, snowshoed to the Eskimo fishing village of Anjikuni, home to 2,000 Eskimos (pictured above). The village was unnaturally silent. Looking into each hut and storehouse, Labelle found blackened stew pots but not a single human.

• Labelle went directly to a telegraph office to report the mystery to the Royal Canadian Mounted Police. The Mounties arrived and were baffled by the mass disappearance of the villagers. A search party found untouched provisions and food in the huts, but no villagers. The sled dogs belonging to the Eskimos were found dead – buried under a 12-foot snow drift at the perimeter of the camp. Later, that night, the Mounties stared in wonder at a strange blue, pulsating light, quite unlike the Northern Lights common to that part of Canada.

• Newspapers throughout the world reported the disappearance of the 2,000 Eskimos in 1930. The Anjikuni Eskimo villagers disappearance remains unsolved today. Stories are still told in Eskimo communities about the UFO that abducted an entire village.

• In addition to the disappearance of the entire Anjikuni village, Native Eskimos also relate stories of the appearance of a mysterious craft in the sky that corresponded with the disappearance of entire Eskimo families without a trace. On one occasion, a family of fourteen disappeared, leaving behind full dinner plates on the table, a television blaring in the bedroom, and an oven that had not been turned off. Despite years of searching, no family member was ever located. But their relatives can show you a burned out circle on the ground where they believed a spacecraft landed and took them away. There are even entire civilizations that have vanished without a trace, like the Mayans for example. Some believe they were also ‘taken’ by extraterrestrials.

• Dr. Clarke also tells about someone named Luther who lived on a reserve in North Dakota. According to Luther, “Once a whole family disappeared. I was a young man when the family disappeared…around 1946 or 1947. They were never found. When their relatives went to visit they found everything just like they got up in the middle of dinner and walked away. Food on the table and everything seemed to be in order, except the family. There were seven of them in all: they were gone. No one on the reservation ever saw them again. They held a ceremony and the Holy man said that they were taken to live among the Star People.” Luther says that Star People visiting the reservation was not uncommon when he was a child. “Sometimes when people disappeared on the reservation, it was said that the Star People had taken them away to live in the stars.” But when the government came in and changed the land, the Star People stopped visiting.

• Luther describes his own UFO encounter: “Maybe five or six years or so after the family disappeared. I was down by the lake one evening. The horses went there to drink in the evenings and I wanted to harness (one of the horses) and put him in the barn. It was just about dusk. Suddenly the hair on my body stood up like an electrical shock. I looked around and that’s when I saw it. A huge object came in over the butte to the north of the property. It came slowly. It was the size of a battleship. I sat down on the edge of the lake and watched. The horses ran away. I was alone. The craft moved to the center of the lake and just stayed there without moving. It was suspended in mid-air. At some point, I started back toward the cabin. That’s when they saw me, I guess. Suddenly a light came out like a search light and fell directly on me. I kept walking. I didn’t know what else to do. When I got back to the house I went inside.”

• Luther continues: “I went into the bedroom to look out the window and that’s when I saw them. Two of them. They were in my bedroom. I stopped, frozen in my tracks when I saw them. They looked at me and seemed just as surprised as me. They were about 5 foot 7 or 8. They were dressed in light-colored uniforms that glistened when the light from the craft hit them. I started backing toward the door and they told me they wouldn’t hurt me. They were searching for something. I understood it to be something they had left behind or left here, but they could not find it. When I asked them what they were looking for, they replied, but I did not understand what they said.” Luther describes the ETs as “shaped like humans”. “They told me not to be afraid and I wasn’t,” said Luther. “They actually acted like I wasn’t even in the room…They were all business.”

• Luther vividly remembers an alien having “this stick like thing.” “It had some kind of motor, I think,” says Luther, “because I remember lights blinking on it. Strangest machine I ever saw. I had never seen anything like that and I saw a lot in the war. They held it and pointed it around the room. The stick must have talked to them or something, because once they pointed it in every direction, they seemed satisfied that I did not have what they were looking for. They put it in a holster.”

• Then the extraterrestrial visitors went back to their craft and left. But before the craft took off, it stopped and hovered over the spot where the missing family once lived. “Their cabin was submerged in water after the lake was built by the government (and the area flooded). I watched for maybe 30-40 minutes. The spaceship just hung there. No movement, no sound, and then suddenly it moved upward and was gone. I have not seen it since.”
• Apollo 12 astronaut Al Worden shared his beliefs on the subject of extraterrestrial life a few years ago: “We are the aliens. [W]e just think they’re somebody else, but we’re the ones who came from somewhere else. [Our ancestors] got in a little space craft and …came here …landed and …started civilization here.” Multiple astronauts have said that, without a doubt, we have been visited and are still being visited by extraterrestrials, and that NASA astronauts have been privileged enough to be in on that type of information. Astronaut Dr. Edgar Mitchell, for example, was quite outspoken on the subject throughout his lifetime.

“My people tell of Star People who came to us many generations ago. The Star people brought spiritual teachings and

stories and maps of the cosmos and they offered these freely. They were kind, loving and set a great example. When they left us, my people say there was a loneliness like no other.”

I’ve been sharing the work of Dr. Ardy Sixkiller Clarke, a Professor Emeritus at Montana State University who is Cherokee/Choctaw and has been researching the Star People and collecting encounters between them and Native Indians for many years. She first learned about the “Star People” when her grandmother told her the ancient legends of her people.

I’ve written about a story she shared regarding an elder who told a story about a ship that crashed on his reservation. I wrote about another elder who shared a story of a petrified alien heart, which he claimed belonged to the Star People. I’ve written one about an elder who claimed to have been told that humans were one of four violent species in the universe. One of the most popular ones was about the stories told by indigenous elders about Star People who are currently, and have been for a long time, living inside of the Earth. The last one I wrote about was a story from a Native American man who claimed to have had an interesting experience in an Alaskan Blizzard.

This will be yet another article sharing the stories Dr. Clarke compiled in her book, Encounters With Star People, Untold Stories of American Indians. Chapter three is titled “Sometimes they come for families.” Right off the bat I find this interesting because having been a researcher into the phenomena myself for a very long time, I know that the idea that some of these beings are ‘taking’ people, families, and in some cases large communities is not uncommon.

One example Dr. Clarke shares in her book is as follows: “In 1930, a fur trapper named Arnaud Laurent and his son saw a strange light and an unusual aircraft crossing the northern sky toward Lake Anjikuni in northern Canada. The trappers described the object as cylindrical or bullet-shaped. Shortly thereafter, Joe Labelle, another trapper, snowshoed to the Eskimo fishing village of Anjikuni. The village, home to 2,000 Eskimos, appeared unnaturally silent when he arrived. He

visited every hut and storehouse and found blackened stew pots, but no people. Inexplicably, he did not find a single human track in the settlement. Labelle, concerned about the missing people, went directly to a telegraph office and reported the mystery to the Royal Canadian Mounted Police. Several hours later, the Mounties arrived and were baffled by the mass disappearance of the villagers.”

“A search party looked for the missing villagers, but they were never found. The sled dogs belonging to the Eskimos were found buried under a 12-foot snow drift at the perimeter of the camp. All of them had starved to death. The search party also discovered untouched provisions and food in the huts.”

“Later, that night, the Mounties stared in wonder as a strange blue glow lit a steady, pulsating light,

unlike the Northern Lights that frequented that part of Canada. Newspapers throughout the world reported the baffling disappearance of the 2,000 Eskimos. Many people believed there would be a rational explanation for the disappearance, but the Anjikuni group disappearance remains unsolved. Today, stories are still told in the Eskimo communities about the UFO that abducted an entire village.”

“While this event in Canada is rare and unusual, there are encounters spoken about on reservations where entire families have disappeared without a trace. Just as in the case of the Canadian disappearance, these events occurred simultaneously with the emergence of a mysterious craft. During the course of my research, I was told about two such events. On one occasion a family of 14 disappeared, leaving behind plates that had been filled on the dinner table, a television blaring in the bedroom, and an oven that had not been turned off. Despite years of searching, no family member was ever located, but their relatives can show you a burned out circle on the ground where they believed a spacecraft landed and spirited them away.”