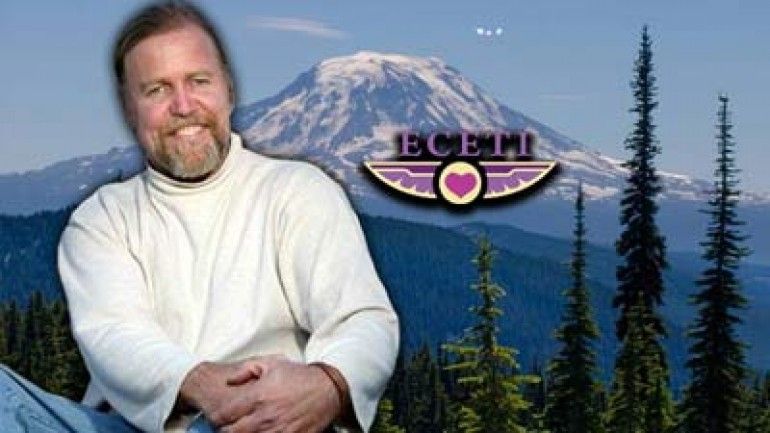 Hunting UFOs at an Alien Ranch in Washington State

• Since 1986, the ECETI Ranch located in the small town of Trout Lake, Washington, has been hosting people from all over the world who are interested in stargazing, alternative healing, and connecting with positive otherworldly beings. Short for “Enlightened Contact with Extraterrestrial Intelligence”, ECETI draws people from May through September to the ‘Sky Watch Weekends’ when, for a $15 donation, you can watch UFOs traverse the night sky.

• A five-hour drive south from Seattle, the ECETI compound is found at the end of a long rural road through the woods where white flags wave from pine trees and lenticular clouds loom over the majestic, white-capped Mt. Adams in the distance. There is no cell phone service. The grounds are dominated by wildflowers and even some grazing yaks. Visitors may stay overnight at the main lodge, a private cabin, or just camp out – for a fee. The ranch has a strict ‘no drugs or alcohol’ policy. Accommodations can best be described as celestial summer camp: bunk beds, few frills, many dream catchers.

• A mysterious orange watchtower is where James Gilliland, the tie-dyed and ponytailed founder and proprietor of ECETI, records his weekly radio show, As You Wish, which delves into galactic mysteries and the existence of Big Foot with various free-thinking guests.

• Gilliland claims that after near-death experiences body surfing, he saw visions of Mt. Adams. Drawn to the region, Gilliland studied the Native American lore which goes back centuries. Native American legend tells of a secret doorway into the mountain, from which otherworldly beings with healing powers would emerge. (It was near Mt. Adams that in 1947 pilot Kenneth Arnold made the first UFO sighting in modern history.) Gilliland tells his visitors that there are five different species of aliens that currently live in the base of Mt. Adams.

• At sunset, people gather in the “Field of Dreams” for the evening’s sky-watching and story-telling – tales of astral travel, Egyptian souls, and UFO encounters. No paranormal topic is taboo. Strapping on a pair of night vision goggles, Gilliland leads the “SkyWatch” as everyone stares up at the night sky. Using a laser pointer, Gilliland directs the sky-watchers attention to small balls of light traveling across the night sky, occasionally flashing, dimming and pulsating.

• There at the ranch – far away from city lights – the night sky is black as ink. But when you put on a pair of night vision goggles, the night sky lights up with stars that appeared to glow light green. The lights in the sky over ECETI seem unusually active as they whiz to and fro at various speeds. The ECETI website identifies these hovering lights as “metallic craft,” “ships,” and “large luminous objects.”

• Gilliland creates excitement by anticipating a “power up” of one of the UFOs as the people watch. During a power up, these UFOs will ‘throw off tremendous energies’, expanding to several times their original size. They seem to be under intelligent control, responding to the energies and thoughts of the people below urging them to “power up”. Then the ball of light momentarily enlarges and flashes to the cheers of the crowd. (see an ECETI promotional video and a video of a “power up” below)

“So I saw this place on a late night documentary and I’ve always wanted to go,” my friend Ash pinged me one day.

I clicked through to the homepage for ECETI, short for “Enlightened Contact with Extraterrestrial Intelligence.” Located on a ranch in the small town of Trout Lake, Washington, ECETI professes a mighty mission: “To help with public awareness of the E.T. reality and to assist people with connecting to positive otherworldly beings.”

“This looks like a Christopher Pike novel,” I typed back. “I’m in.”

After a five hour drive south from Seattle, we arrived at the ranch. It’s entrance was marked by ECETI’s official logo: a winged golden heart with a lion’s face. Continuing down the long, wooded road, our cell phone signals cut out. White flags of peace flapped from the pine trees. Lenticular clouds loomed over the majestic, white-capped Mt. Adams in the distance.

I felt like I had fallen off the map of reality and into the pages of some YA fantasy fiction.

ECETI FOUNDER JAMES GILLILAND has been hosting people at his ranch since 1986. Seekers from all

over the world come to stargaze, explore alternative healing techniques, and speculate about the possibility that we’re not alone in the universe. The biggest draw is the SkyWatch Weekends, which Gilliland hosts May through September. The hope is that, for a $15 donation, you can see some UFOs.

Arriving with zero expectations, Ash and I parked in the dirt lot and went inside the main lodge to pay for a night’s stay. (While you don’t have to stay overnight to attend a SkyWatch, we opted for the full experience.) Visitors can camp out on the property for a suggested donation of $10 a night, or shack up in a guest room, yurt, or private cabin ($75-$125). Accommodations can best be described as celestial summer camp: bunk beds, few frills, many dream catchers.

Paying cash (this is not a credit card kind of place), Ash gently nudged me and pointed to the man

standing behind us. “That’s James.”

With his tie-dyed shirt and scrappy ponytail, James Gilliand looks more like a Deadhead than the self-appointed wingman for interdimensional beings. Gilliland claims he saw visions of Mt. Adams after several near-death experiences body surfing. He was drawn to the lore of this region, which goes back centuries: One Native American legend told of a secret doorway in the mountain, from which otherworldly beings with healing powers would emerge. And it was near Mt. Adams that, in 1947, pilot Kenneth Arnold made the first UFO sighting in modern history.

“There’s five different species of aliens that live in the base of the mountain,” Gilliland told us, as nonchalantly as someone placing their morning coffee order.

We smiled, nodded, and scurried off to explore the property. Like Pee Wee’s Playhouse for the paranormal, there are wildflowers as far as the eye can see, a handful of yaks wandering around, and a mysterious orange watchtower. I later learned this is where Gilliland records his weekly radio show, As You Wish, which speculates about galactic mysteries and the existence of Big Foot with various free-thinking guests.