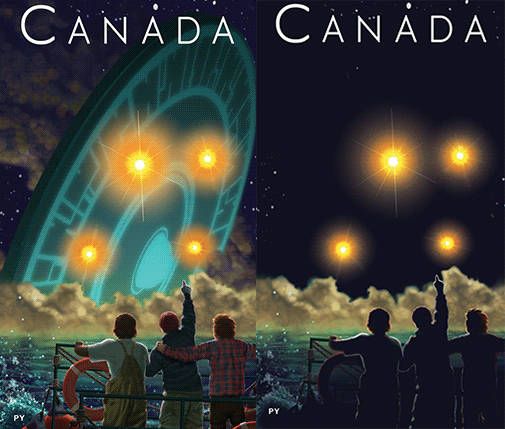 • A $20 silver coin commemorating the infamous October 4, 1967 Shag Harbour USO incident in Nova Scotia, Canada was launched by the Royal Canadian Mint on October 1st. Only 4000 coins were minted, and they sold out in two days. But organizers of this year’s Shag Harbour UFO Festival, October 4 – 6, made sure there were plenty of coins available for festival goers.

• This coin follows the 2018 release of a Royal Canadian Mint coin commemorating the equally infamous Falcon Lake UFO incident. Said Christa Bruce, product manager at the Royal Canadian Mint, “[A]fter the success of that coin we had many of our customers sending us emails …[asking] us to do the Shag Harbour incident.”

• The ‘Falcon Lake’ coin and the new ‘Shag Harbour’ coin are part of the Canadian Mint’s ‘Unexplained Phenomena series’. The coins have a ‘sci fi glow’ when illuminated with a blacklight flashlight.

• “We really wanted to pay homage to the people of Shag Harbour,” said Bruce. “The coin features fishermen on a fishing vessel staring in awe at a UFO plunging into the ocean.” Shag Harbour UFO eyewitness Laurie Wickens and UFO researcher Chris Styles, were instrumental in the development of the coin.

• Styles says that the Shag Harbour UFO incident “… is history not just ufology.” He has heard from graduate students who use the incident as a topic for university dissertations or doctorates in folklore and history.

• One of the highlights of this year’s Shag Harbour UFO festival was the release of documents related to the search in the days following the USO sighting. Styles said that it revealed the names of American Navy divers that he hadn’t seen before. Stiles wants to track down these divers to glean new information, if possible.

SHAG HARBOUR, N.S. — While a new collector’s coin featuring the Shag Harbour UFO incident released by the Royal Canadian Mint on Oct. 1 sold out in two days, organizers of this year’s Shag Harbour UFO Festival made sure there were plenty for festival goers to purchase.

The $20 silver coin was officially launched and celebrated on the opening night of this year’s Shag Harbour UFO Festival, which was held Oct. 4 to 6.

The coin is the second in the Unexplained Phenomena series, and features black light technology adding a sci-fi glow whn illuminated with a blacklight flashlight.

“Over the course of the last year many have asked us why are we making another UFO coin and why did we choose the Shag Harbour UFO coin. The answer was quite simple,” said Bruce. “The Royal Canadian Mint issues coins that has shaped the Canadian experience and this includes coins of unexplained phenomena such as the Shag Harbour Incident. In 2018 we launched the first coin in the series based on the Falcon Lake incident and after the success of that coin we had many of our customers sending us emails and feedback and had actually asked us to do the Shag Harbour incident.”