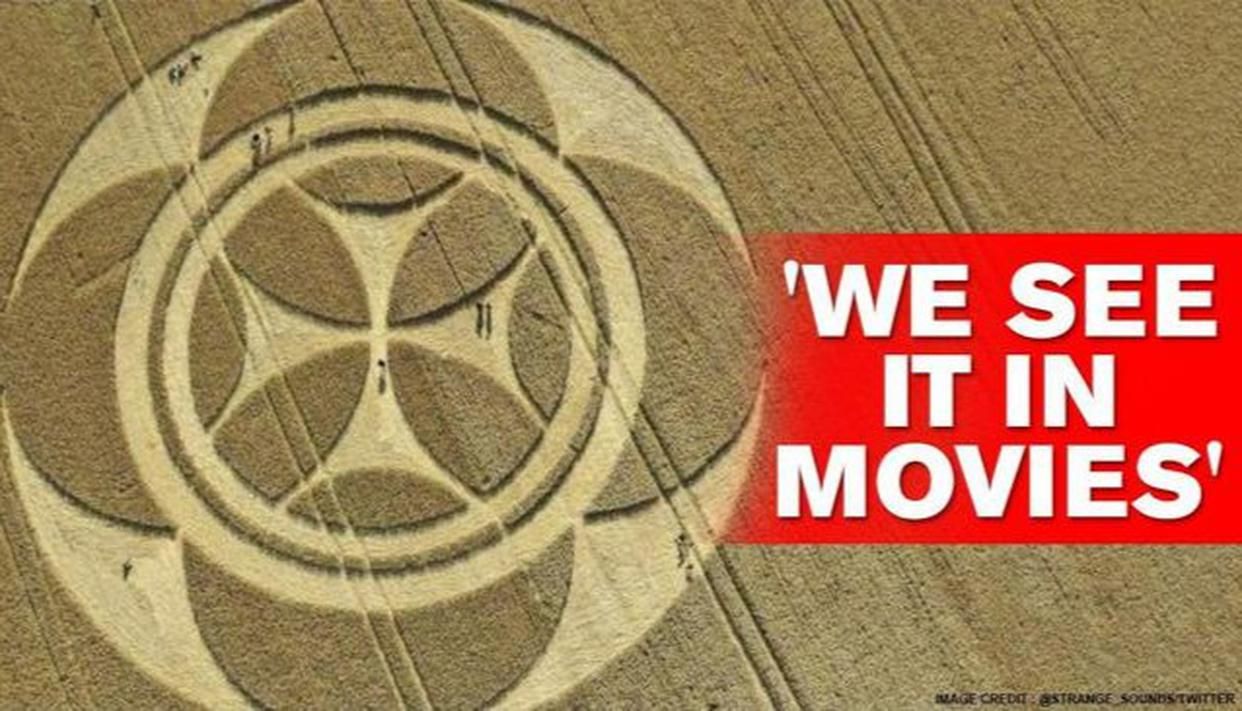 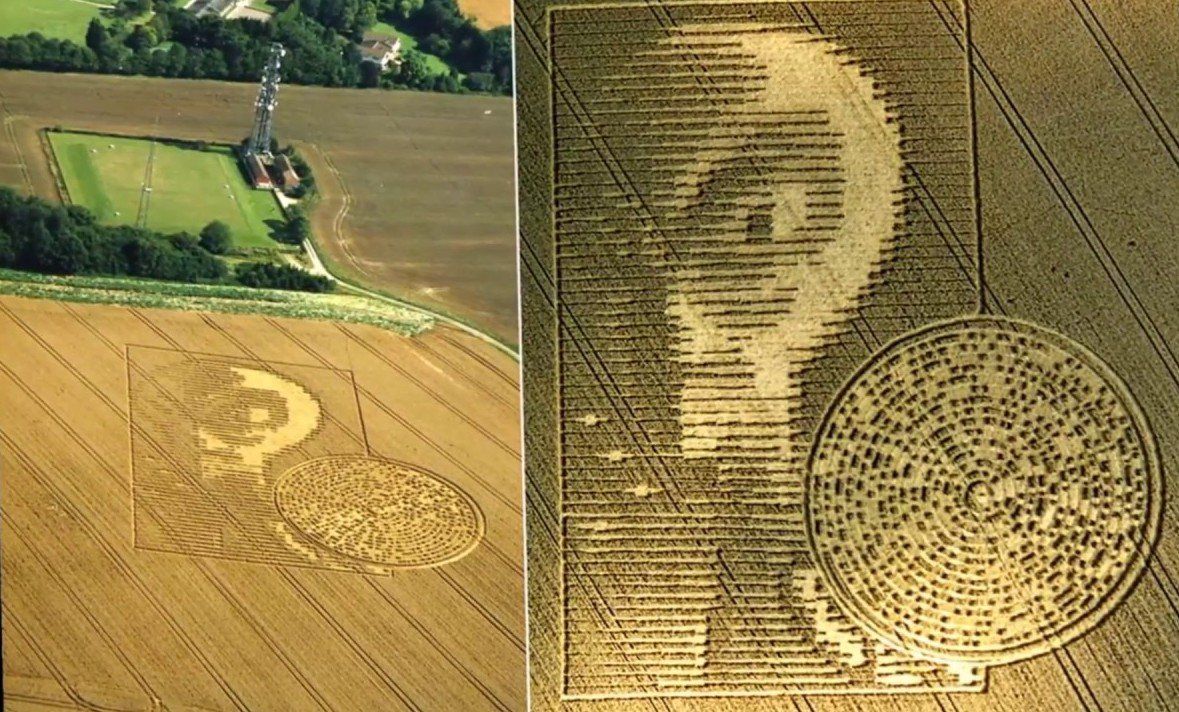 • In 2002, in a field near Crabwood/Winchester, Hampshire, England, this famous crop circle appeared overnight (pictured above). It’s been exhaustively filmed, documented, photographed and researched by multiple scholars all over the world. These types of crop circles are intricate, remarkable and very complex designs that are “sown” into crop fields.

• Richard Taylor, a physicist from the University of Oregon, notes that the nodes of these stalks are blasted out on one side, and not simply flattened. This ‘blasting’ effect has been replicated by highly localized microwave heating, which causes water inside the crop to vaporize and dislodge. As a result, the stock flops completely over to one side. Taylor concludes that crop circle artists are using GPS devices, lasers, and microwaves to create these astonishing patterns of geometric forms.

• Paul Vigay, a British computer consultant notable for work in developing and supporting RISC OS software and longtime researcher in the field, was the first to discover that the message was encoded in ASCI binary code.

• Miia Pitkonen, a physicist from the University of Helsinki in Finland, published a paper titled “Crop Circles and Life at Parallel Space-Time Sheets”, a two part series that examines the Crabwood crop circle. Pitkonen reports, “Crabwood message consists of two parts. An alien picture and a picture representing spiral like bit sequence starting from the center of the picture and proceeding counterclockwise. It has been proposed that the message is coded using 9-bit code and that 8-bit portions obey ASCII code. With this assumption the message reads as: ‘Beware the bearers of FALSE gifts & their BROKEN PROMISES. Much PAIN but still time. EELI!UVE. There is GOOD out there. We OPpose DECEPTION. Conduit CLOSING\’

• Pitkonen explains, “The (crop circle) interpretation relies on extremely general aspects of the ASCII code: capital and small letters correspond to amino-acids and capital and small forms of a given letter denote for the same amino-acid. Control signs denote the amino-acidic counterparts for the code associated with the exotic RNA. The ordering of the symbols does not matter. One could also use different kinds of symbols: only the numbers of various kinds of symbols telling how many code words are mapped to a particular amino-acid (or whatever counterpart of it) matter.”

• Whoever made this circle is extremely artistically, technologically, and mathematically advanced to a point beyond belief.

Did you know that crop circles are actually real? How they’re made and who or what is making them is up for debate, but the existence of intricate, remarkable and very complex designs that are “sown” into crop fields all around the world is a fact that’s not open for debate. Looking at some of these designs, especially footage taken from a plane or a helicopter, should give you goosebumps.

Why? Richard Taylor, a physicist from the University of Oregon, outlines it best. Despite ridiculing any type of ‘supernatural’ explanation for these designs, he states that this is “the most science-oriented art movement in history.” It’s also interesting to note that many of these designs have been studied in a laboratory setting, as some of the nodes of these stalks are blasted out on one side. Not many people know this about crop circles, but the crops are not simply flattened. It’s quite clear that some sort of high level technology is being used.

This ‘blasting’ effect has been replicated by highly localized microwave heating, which causes water inside the crop to vaporize and dislodge. As a result, the stock flops completely over to one side. Because of this, Taylor concludes that crop circle artists are using GPS devices, lasers, and microwaves to create these astonishing patterns of geometric forms due to the measurements he found in his research.

There will always be those who reject some sort of supernatural hypothesis, but for those who actually look deeper into the crop circle phenomenon, it’s hard to argue that something strange isn’t happening. Personally, I would say it’s obvious.

The crop circle you see above appeared in 2002 in a field near Crabwood, United Kingdom. Yes, it was real. It’s been filmed, documented and photographed. There is footage all over the internet. It made a lot of noise as it’s documented in the Crop Circle archives and has been researched by multiple scholars all over the world.

Who could do something like this? Who could design a binary code and implant a face within a crop in the dead of night in only a few hours, leaving no entrance or exit marks, while being artistically and mathematically precise?
Miia Pitkonen is one of many scholars who have examined this particular circle. He is a physicist from the University of Helsinki in Finland, specializing in medical physics. Clearly, he has an interest in this phenomenon because he published a paper titled “Crop Circles and Life at Parallel Space-Time Sheets.” It’s a two part series, and in it he examines the Crabwood crop circle. 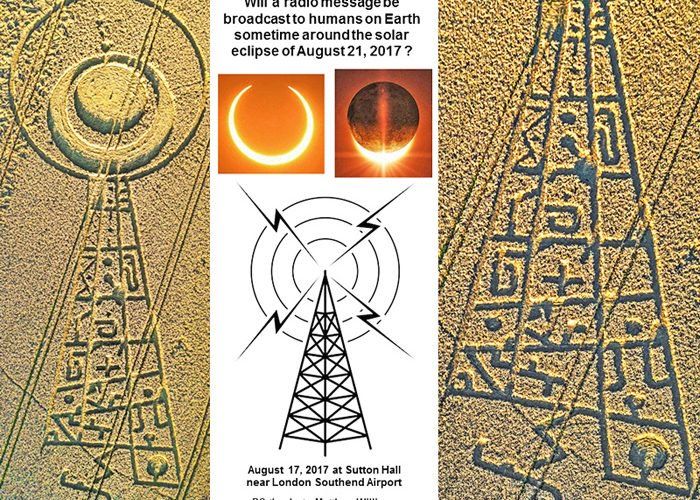 Intriguing ‘Eclipse Like’ Crop Circle Shows Up In Essex

It’s just days before an eclipse of a lifetime and as the world readies for the sight and some for the energetic shifts, a new crop circle has appeared in a field at Sutton Hall near London Southend Airport. The circle was discovered on August 17, 2017 but it’s meaning, if any, is not yet fully understood. A crop circle with meaning you might ask? Yes, evidence has shown time and time again that many of these circles have incredible scientific anomalies and thus people believe the formations come from somewhere or something else.

On the scientific side, the electromagnetic field over the area where a circle appears is usually electrostatically charged. There is also a rare form of electromagnetic energy called an “ionized plasma vortex,” also known as ball lighting, involved with these formations.

Let’s have a closer look at this and imagine for a moment. In this particular formation, it appears the overall appearance resembles a “radio broadcast tower” with a “satellite dish” near the top. In this case, its “satellite dish” resembles the usual symbols for a “solar eclipse.” Interesting considering we will have the Great American Eclipse  in just a couple days  on August 21, 2017.

So what might this mean? Could we be receiving some sort of radio message from somewhere or someone at that time? Might it simply mean that new frequencies are coming onto our planet as a result of the eclipse? As we explored deeply in our latest documentary The Collective Evolution III: The Shift, celestial bodies, including the sun, have a great impact on our physical bodies, minds, and consciousness. This eclipse will be no different, and our in-house astrologer Carmen DiLuccio has outlined how this eclipse may affect you in his latest article about the eclipse.