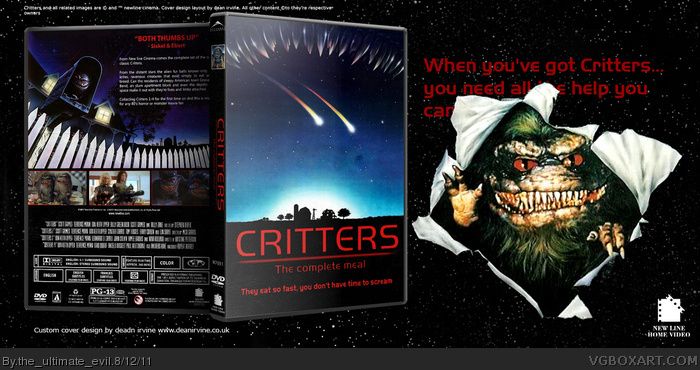 • The 1986 cult-classic monster movie, “Critters”, begins in space as the goblin-like Critters break out of their asteroid prison and crash their hijacked spaceship in Grover’s Bend, Kansas. Soon they besiege an isolated farmhouse where the frightened family holds them off with shotguns.

• As pointed out by veteran writer, Matt Molgaard, and by Bruce G. Hallenbeck in his chronology of Comedy-Horror Films, “Critters” is loosely based on a real-life alien confrontation known as the Kelly-Hopkinsville Encounter, one of the most well-documented UFO incidents out there. (see previous ExoNews article on the Hopkinsville Incident)

• On the evening of August 21, 1955 in a rural farmhouse located between the towns of Kelly and Hopkinsville, Kentucky, five adults and seven children were besieged by little monsters from space. As Billy Ray Taylor was drawing water from the well he saw shooting star streak across the sky and land somewhere nearby behind a tree line. Billy Ray and his friend Elmer Sutton went to investigate. They came upon a creature, ran back to the house and barricaded their family inside. Before long many of these creatures were besieging the farmhouse as Billy Ray and Elmer held them off with shotguns. Although the creatures were shot several times, even at point-blank range, they were apparently unharmed. At one point Billy Ray’s hair was grabbed by a huge, clawed hand. And several times family members would leap back, startled, from the glowing eyes and twisted faces of the creatures staring in at them through the window.

• After several hours, the family took an opportunity make a dash to their car, and they drove to the police station where they reported the entire thing. Four police officers raced out to the scene, alongside five state troopers, three deputy sheriffs and four military police from the nearby US Army base. They searched the property and found nothing except evidence of gunfire.

• In the early 1980’s when film writer/director Steven Spielberg was considering ideas for a UFO-themed movie, he planned to do a movie called “Night Skies” about a family besieged by vicious aliens in a farmhouse, while one of the children would befriend a gentler alien who was different from the others. Ultimately, Spielberg split the ideas into two different movies – “E.T.: The Extraterrestrial” about a child befriending an alien, and “Poltergeist” about a family besieged by a paranormal entity. Spielberg also produced Joe Dante’s “Gremlins” which has similarities to the creatures that visited Hopkinsville in 1955, but in a family-friendly way as Spielberg had envisioned “Night Skies”.

• But “Critters” is the film that most closely mirrors the Hopkinsville encounter, complete with a shooting star, vicious creatures from outer space, a family barricaded in a farmhouse with shotguns, glowing red eyes peering in through the window, and a space critter’s clawed hand grabbing one of them.

Critters is, with good reason, a cult classic of the mid-eighties. It followed on the heels of Gremlins and certainly has its similarities to Joe Dante’s little monster masterpiece, but Critters still manages to stand apart. It has a flavor all its own.

Whereas the Gremlins remained much more mysterious in origin—unless you go by the novelization, which goes obsessively into detail over their backstory—the Critters are extraterrestrial from the first moment we’re introduced to them. The movie begins in space, watching them break out of their asteroid prison before crashing their hijacked spaceship into Grover’s Bend, Kansas, where the film begins in earnest. That’s not only where we’re introduced to our main characters, but where we set up the surprising siege movie that Critters actually becomes.

For as fun and goofy as it is, Critters takes to heart the inherently unnerving concept of a family in a small, isolated farmhouse being besieged by little monsters. And that’s very interesting, not just because of how well it works tonally and stylistically for the film, but also because of the fact that it was based on an actual, famous real-life incident in which a family in a small, isolated farmhouse was apparently besieged by little monsters.

I’m not the first to make the connection. A great writer named Matt Molgaard, who tragically passed last year, wrote a terrific piece for Blumhouse.com that was how I first learned of the incident and how it connected to Critters. But I thought it would be worth not just looking at the fact that Critters takes its inspiration from this encounter, but specifically breaking down how it takes inspiration and what moments from the encounter clearly made their way into the film.

The incident is now widely known as the Kelly-Hopkinsville Encounter, though it has also been cited over time as the Hopkinsville Goblins Case and the Kelly Green Men Case. It is one of the most well-documented incidents in the history of UFO sightings and became famous because of that.

Said incident took place in 1955 in Kentucky, just between the towns of Kelly and Hopkinsville. Two families rushed into the police station claiming that they had been holding off vicious, small creatures for several hours, which they believed to have come from a UFO. Five adults and seven children apparently witnessed these events unfold over the course of the evening of August 21st. Elmer Sutton and Billy Ray Taylor seemed to take charge during the farmhouse siege, shooting at twelve to fifteen creatures that repeatedly attacked the group over the course of the evening.

It began around seven o’clock, when Billy Ray looked up while he was drawing water from the well to see what appeared to be a shooting star streak across the sky and disappear behind the tree line, somewhere behind the house. Taylor and Sutton went back out to investigate, running back into the house when they saw a creature outside, kicking off an apparent invasion that would last for the next three hours. At one point, Taylor’s hair was grabbed by a huge, clawed hand. At several points, family members would leap back, startled, from the glowing eyes and twisted faces of the creatures staring in at them through the window.

Although the creatures were shot at several times, none were killed, otherwise the incident would have become much more famous. Once they had a clear shot, the two families piled into their cars and drove to the police station where they reported the entire thing. The police responded, not because they believed the claims, but because they were legitimately worried about a possible gun battle erupting between local citizens. Four police officers raced out to the scene, alongside five state troopers, three deputy sheriffs and four military police from the nearby US Army base. They searched the property, but found nothing but evidence of gunfire; bullet holes were found in the trees, the side of the house and through the screens of the doors.

They found no monsters. No evidence that it was a hoax, either.