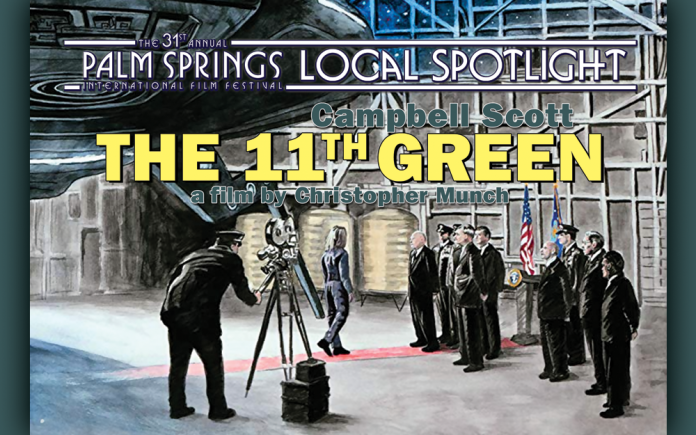 • “There was an urban legend out there …in the 1950s that Dwight Eisenhower had one or more face-to-face interactions with visitors from other worlds,” says Munch. “What interested me about the story was not so much the specifics of it or whether it was true or not, but more so … how (Eisenhower) would have potentially reflected back on those experiences late in his life. Would he have regrets or done things differently?”

• The storyline involves a Washington DC journalist named Jeremy who moves into his late father’s house, which by coincidence was formerly owned by President Eisenhower before the President’s death in 1969. Jeremy’s father served on the National Security Council staff for President Eisenhower back in the day. His father’s former protégé gives him reels of film that suggest America had interaction with off-world visitors 50 years ago, but the “extraterrestrial question” was left in the wrong hands. The film portrays Eisenhower in 1967 contemplating the extraterrestrial presence kept hidden by a shadow government. The story switches time-periods from Jeremy’s father as a young counselor to the President in the 1950s, to modern day as Jeremy is piecing together the history.

• Munch notes that, “In the course of the last year, the film has become timelier … as “major publications have documented … incidents involving the U.S. Military engaging with UFOs over the past 15 years or so.” The military’s revelations of UFOs “cannot be easily dismissed, as it was from the 1950s onward, where UFOs and ETs were only considered in the context of the ‘giggle factor.’”

• Regarding Eisenhower’s encounters with alien beings, Munch believes that such encounters would have been “routine” for the former President. “I don’t think anything really phased Eisenhower,” says Munch. As a mainstream journalist, Jeremy’s character “certainly has a predisposition”. “[B]ut it’s balanced out by his concern for the validity of what he’s reporting. I think that’s the quandary for any journalist who is having to report on the subject of UFOs or extraterrestrials.”

• [Editor’s Note]   I doubt that Eisenhower considered his meetings with extraterrestrial beings to be “routine”. I doubt that anyone would find interactions with aliens routine, except maybe Corey Goode. Eisenhower was famously under a great deal of stress, causing multiple heart attacks during his presidency. After he had completed his second term in office, his farewell address in January 1961 alluded to a shadow government hiding the fact that they were working with extraterrestrial beings, and creating a massive ‘military industrial complex’ that owed no allegiance to the elected government of the United States nor its citizens.

Written and directed by Christopher Munch, “The 11th Green” begins on slow simmer and eventually arrives at an emotional boil as it floats back and forth through time to explore a curious proposition: that former President Dwight D. Eisenhower was not only interested in but also had contact with extraterrestrials.

The film, which was partially shot in Palm Desert and other Coachella Valley locations, screens in the Locals Spotlight program at the 31st annual Palm Springs International Film Festival.

“There was an urban legend out there for some time, and I believe reports first appeared in the 1950s

that Dwight Eisenhower had one or more face-to-face interactions with visitors from other worlds,” Munch says. “What interested me about the story was not so much the specifics of it or whether it was true or not, but more so the emotional ‘what if?’ involving Eisenhower. How this man would have potentially reflected back on those experiences late in his life. Would he have regrets or done things differently?”

How did Munch craft a story with a potentially contentious subject matter that today’s audiences could embrace? With an inventive storyline.

Toss in a romantic interest via his father’s former assistant, Laurie (played by Agnes Bruckner), and a visit from his father’s protégé, Jacobsen (played by Currie Graham), who hands Jeremy reels of film that suggest America had interaction with off-world visitors 50 years ago, and our protagonist suddenly finds himself in a personal and professional conundrum.

Is his newfound potential love interest clouding his interest? Should he believe in the film footage presented to him?