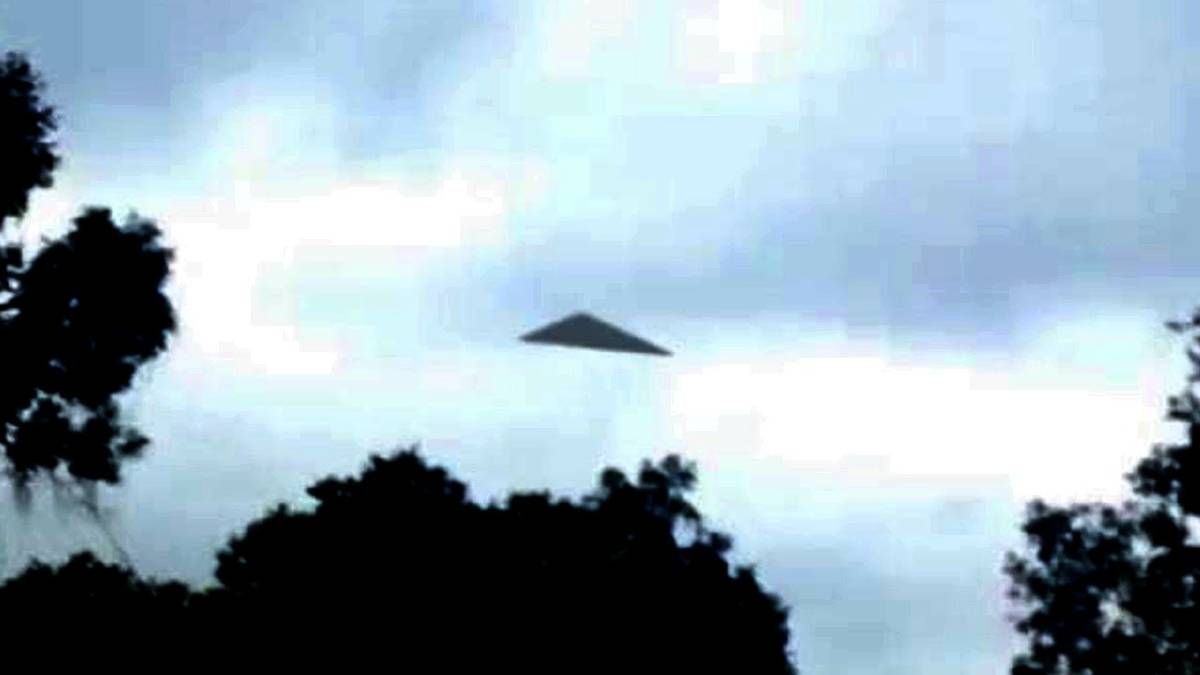 • Huge, silent, black triangle or boomerang shaped craft have been reported and even filmed flying over populated areas all across North America and Europe for decades. In the early 1980s, hundreds of nighttime sightings were reported in rural New York. In 1989, ten thousand witnesses watched and photographed several huge black triangle craft fly silently over Belgium. Belgian Air Force F-16 jets couldn’t keep up with the triangles’ virtually impossible maneuvers. In 1997, thousands watched a gigantic triangle-shaped craft fly across the Phoenix night sky. Military officials first said they hadn’t seen anything, and then claimed that it had been a National Guard unit training with flares at night. The public didn’t buy it.

• Large black triangle craft were seen over Russia as early as the 1970s. Recently, the mystery triangles have been seen in every US state, flying low and slow over cities. The National Institute for Discovery Science (NIDS), a private Las Vegas organization, has a database of more than 1,000 black triangle reports. NIDS’ Dr. Colm Kelleher headed a four-year investigation of the black triangles. He notes that “These things are huge …football-field size. [S]ometimes they’re stealthy, but a lot of the times they’re flying with extremely bright lights. They’re always silent.” Radar have documented these craft dropping 20,000 feet in a matter of seconds. Said Kelleher, “Why would unacknowledged aircraft be flying at 500 to 1,000 feet over populated areas? …If they’re a classified military project, why are military jets scrambled to go after them?”

• In 2019, Las Vegas journalist Cateland White watched as a dark behemoth flew over her backyard. Said White, “It was triangular shaped, and there were rectangular reflectors. There was no interior light coming out of it at all. …It was really slow. And I couldn’t figure out how it was staying in the air.” It seemed to be heading toward nearby Nellis Air Force Base. When White contacted the base, a base representative told her, ‘Ma’am, I’m going to tell you one more time and this is the last time I’m gonna tell you. You will forget what you saw. And you won’t tell anybody.’ “The man said, ‘I don’t want you to talk about this anymore’”.

• These black triangles have often been seen near military installations. One huge craft was spotted on a runway at Groom Lake (Area 51), part of Nellis Air Force Base. Some speculate that these are secret advanced military blimps, capable of carrying large deployments of troops or tanks to remote locations. The Pentagon has awarded three contracts for the development of big airships. Others think that the Department of Homeland Security may be using them to spy on suspected domestic terrorists within the United States. A high tech airship could suck up every fax, phone call and email as it passes over.

• The NIDS database shows that in the past two years sightings of giant triangles over major cities have skyrocketed. Whoever’s flying them isn’t worried about their existence being known. When NIDS posted its study online it was swamped with nearly 100,000 inquiries, mostly from the aerospace industry. “So there’s a tremendous amount of interest in this topic,” says Kelleher. “Are these aircraft ours are they somebody else’s?[And] if not ours, who’s?”

• [Editor’s Note]  In chapter 15 of Dr Michael Salla’s 2019 book: US Air Force Secret Space Program – Shifting Extraterrestrial Alliances & Space Force, he discusses the origin of the US Air Force’s top secret Aurora Program which developed the TR-3B triangle craft, able to perform both in the earth’s atmosphere and in near space. Salla cites Edgar Fouche who confirms that the TR-3B, code named ‘Astra’, was a tactical reconnaissance craft developed in the 1970s and built by private aerospace companies for the Air Force during the 1980s. Fouche served with the US Air Force from 1967 to 1987 and then spent another eight years with defense contractors working on a number of classified aviation programs at Groom Lake Area 51.

The TR-3B employs a “Magnetic Field Disrupter” which rotates highly pressurized mercury-based plasma around a circular accelerator ring, reducing the craft’s weight by a factor of 89%. Three rocket engines using conventional fuel sources like hydrogen, oxygen and/or methane provide the thrust. The TR-3B is a high altitude, stealth, reconnaissance platform with an indefinite loiter time. Fouche claimed that the TR-3B was able to silently hover for at least 10 minutes and gave off “a corona of silver blue light” that glowed around it while hovering.

Corey Goode asserts that the TR-3B was a “hand me down” to the USAF’s military space program and to cabal “elites” from an even more highly classified space program controlled by NASA along with the Antarctic German Space Program.

Huge, silent, unknown craft have been reported flying over populated areas dating back decades. What are they?

Black triangles or boomerang shaped objects, some larger than any known aircraft, have been documented, even filmed, over cities all across North America, as well as in Europe. If they’re a classified military project, investigators wonder, then why are military jets scrambled to go after them?

“They launched on several occasions top-of-the-line military aircraft against these things and they were left in the dust,” says Dr. Colm Kelleher of the National Institute for Discovery Science. “One minute they’re overhead, and the next they’re over the horizon.

Dr. Kelleher managed an investigation of the black triangles back in 2004, which coincidentally is the same year the U.S. Navy encountered a now-famous UFO known as the “Tic Tac.”

So what were those black triangles, and who, if anyone, was flying them? A special 2-Part report, only on mysterywire.com.

MYSTERY WIRE — In 1997, thousands of eyewitnesses watched in awe as a boomerang-shaped formation of lights cruised slowly and silently over the city of Phoenix.
“They’re lined up in a pattern,” one witness said as a camera recorded the event.

Witnesses first thought these were separate lights flying in formation, but quickly realized the lights were all part of a single gigantic something. Military officials were asked about the Phoenix lights but said they hadn’t seen anything.

Months later, they explained that a National Guard unit had been training with flares near the city. The public in general didn’t buy it.

Eight years earlier, the airspace over Belgium was repeatedly violated by huge unidentified black triangles. Ten thousand witnesses saw them. Several of the triangles were photographed. The Belgian Air Force dispatched F-16s to intercept and destroy the unknown intruders, but the triangles performed maneuvers that seemed virtually impossible.

Research scientist Dr. Colm Kelleher recounts the Belgium incident. “On several occasions they launched the top-of-the-line military aircraft against these things, and they were left standing. They were left in the dust.”

“One minute these things are overhead and the next minute they’re on the horizon,” Kelleher said.

Kelleher spent several years with the National Institute for Discovery Science, or NIDS, a private Las Vegas science organization. A four-year NIDS study of the mystery triangles has found that these craft have been seen for decades all over the world.

In the early ’80s, there were hundreds of nighttime sightings in rural New York. Belgium was inundated in the late ’80s. But more recently, the mystery triangles have really come out of the closet and have been seen in every state, including Nevada, flying low and slow over cities.

NIDS now has a database of more than 1,000 black triangle reports, 17 of them from Nevada. The witnesses often say the craft seemed to float like a blimp or airship. But they’re also capable of aeronautical magic.