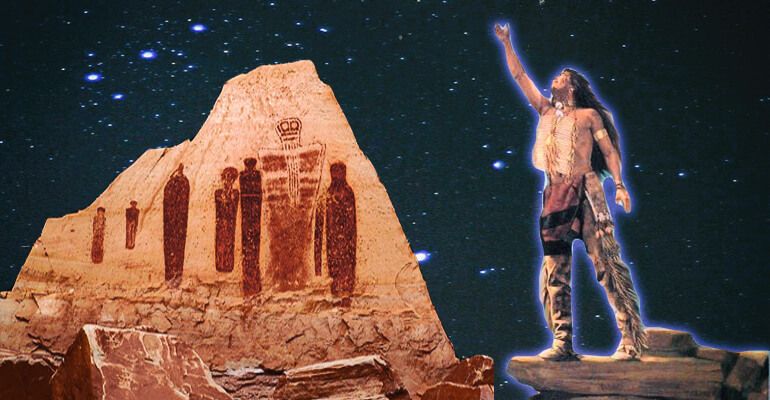 • Dr. Ardy Sixkiller Clarke, a psychologist and Professor Emeritus at Montana State University, is also a Cherokee/Choctaw Native American who has worked with indigenous people for most of her career. She has some amazing stories to tell in her book, Encounters With Star People, Untold Stories of American Indians.

• In her book Dr. Clarke writes, “I first learned about the “Star People” when my grandmother told me the ancient legends of my people. My childhood reality included narratives that traced the origins of the indigenous people of the Americas to Pleiades; stories of little people who intervened in people’s lives; and legends about the magical gift of the DNA of the “Star People” that flowed in the veins of the indigenous tribes of the Earth. I embraced the stories of the celestial visitors who lived among the Indian people as part of my heritage.”

• Dr. Clarke shares a story about a Native American named Harrison. Harrison told a story of how an extraterrestrial spaceship crashed into the side of a nearby butte (a steep hill) in the fall of 1944 when Harrison was 12 years old. It was a long cylindrical craft, about 30 feet wide and 60 feet long. The craft hit with such force that only a small section stuck out of the butte. The location was isolated, about ten miles from the nearest ranch, which was abandoned anyway. From a distance, Harrison’s grandfather kept watch over the craft and the beings that exited the craft for several days.

• When Harrison’s grandfather first tried to approach them, the beings would vanish before his eyes. After the beings realized that he meant no harm, they didn’t disappear when he came to them. One day, his grandfather approached them with food. The beings told him they did not eat flesh. His grandfather said that the fourteen extraterrestrials whom he saw milling about the spacecraft were 7 to 8 feet tall, with white hair, long slender fingers and skin that was very white and thin, almost translucent. Their eyes changed color depending on the light. They wore a one-piece light green outfit which would dry instantly if they waded into the nearby water.

• Harrison’s grandfather was told that the beings had been dropped off by a bigger ship that was circling Earth. They were voyagers and traveled the universe observing life on other worlds. They had been coming to Earth for thousands of years observing, collecting and noting changes. They took his grandfather aboard their craft and showed him pictures of their home world. He was enthralled by what he called “a picture machine”, which was likely a computer monitor. The ‘flashing pictures’ showed him a place different from Earth. It reminded him of the bad-lands, but with no vegetation. The ETs houses were underground. He asked them if it was Heaven, and they told him they did not have a place such as heaven. The star visitors told him they liked the green of Earth. They loved the water. On their world, water was underground. Nothing existed on the surface.

• The extraterrestrial beings waited with their derelict spaceship from late November 1944 until April 1945 when another ship came to rescue them. On April 17, 1945, as the visitors prepared to leave on the rescue ship, each of the stranded beings came to him and bowed before they left. He understood they appreciated his discretion. Then he watched them leave and never saw them again.

• After the beings had left, the craft was well camouflaged to the point that nobody would be able to recognize it unless they knew specifically what they were looking for. Harrison’s grandfather said that there were seventeen seats on board the craft. He said that when you sat in a chair, it enveloped and ‘melted’ around him, as if it was alive, and then released you when you wanted to get up. The craft also had what looked to be hieroglyphics.

• In the summer of 1947, the Army Corps of Engineers confiscated Harrison’s grandfather’s land and in return gave him a worthless piece of land on the other side of the butte. They built a dam there and flooded the area where the craft was to create a reservoir. He suspects that the Army Corps took the craft.

• The Native Americans tell of a prophesy where, after a period of 500 years, a great spiritual spring time would emerge with such intensity that all that had been covered in the cold bitter snow would be revealed and cleansed and purified. We would emerge galvanized, reunited as a reunion of the entire human family. That time is now.

I recently came across the work of Dr. Ardy Sixkiller Clarke, who brings to the field of ufology degrees in history, English, psychology, and educational leadership and a background as a teacher, university professor, junior college and university administrator, licensed therapist and psychologist, and social science researcher. She is a Professor Emeritus at Montana State University and former Director of the Center for Bilingual/Multicultural Education. Dr. Clarke, who is Cherokee/Choctaw, has worked with indigenous people for most of her career, and has some amazing stories to tell.

Here is a great quote at the beginning of her book, Encounters With Star People, Untold Stories of American Indians. “I first learned about the “Star People” when my grandmother told me the ancient legends of my people. My childhood reality included narratives that traced the origins of the indigenous people of the Americas to Pleiades; stories of little people who intervened in people’s lives; and legends about the magical gift of the DNA of the “Star People” that flowed in the veins of the indigenous tribes of the Earth. I embraced the stories of the celestial visitors who lived among the Indian people as part of my heritage.”

In her book, she shares many stories, and one of them comes from a gentleman named Harrison. She writes: “\Located in the states of North and South Dakota, Wyoming, Idaho, and Montana, the Northern Plains Indian Tribes have many accounts about UFOs. The story in this chapter is told by a well-respected elder of a Northern Plains tribe. His encounter predates the crash at Roswell. Since I recorded this story, Harrison has passed, but the time I spent with them over the years, changed my life.”

Harrison told a story of how his grandfather took him on a spaceship in the summer of 1945. He said he was 12 at the time, and explained how the Army Corps of Engineers came to the reservation around the summer of 1947 to survey the river and surrounding area “for the reservoir.” So originally, there was no reservoir. The Corps confiscated the land and in return gave Harrison’s grandfather a worthless piece of land on the other side of that butte.

“I spent every summer on his place from the time I was six years old. Mom and pop both worked for the tribe and they didn’t want me home alone during the summers. So every May I packed two paper bags: one with a change of clothes and the other with books, marbles, and my toy gun. My folks dropped me off to live with Gramps from June to late August. I loved my summers here, even the isolation. I was the only child for miles. I rode horses and herded cattle. Helped with the chores. Whatever I could do. As I got older, there were bigger chores and more responsibility. There was no TV or videos like kids have today. At night Gramps amused me with the ancient myths and legends of our people.”

Clarke’s relationship with Harrison grew over the years, and the two of them met when his school district requested her assistance in applying for a federal grant. Harrison was her contact and was responsible for escorting her around the reservation.

She explains, “It took nearly 25 years of visits before Harrison asked me if I believed in Star People.” She replied with a yes, and then he said, “Someone told me you collect stories about the Star People, I find that unusual.”