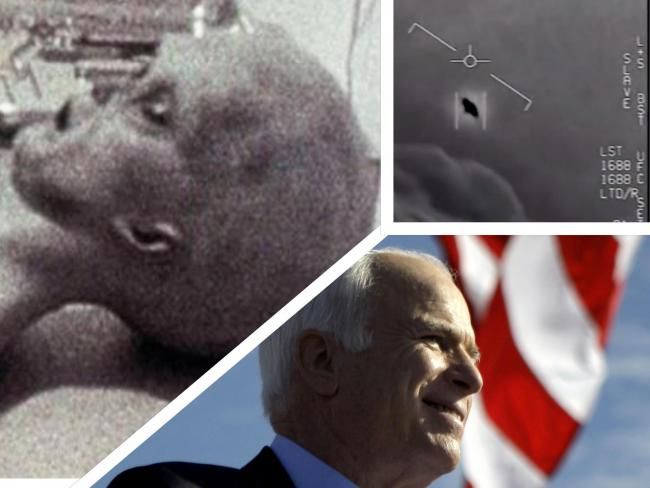 • On January 16th, a declassified DIA/Pentagon letter dated January 9, 2018 addressed primarily to the late Arizona Senator, John McCain, as the Chairman of the Armed Services Committee, (see letter with attached list of 38 DIA-commissioned program titles here) was released pursuant to a Freedom of Information request. The letter contained the titles of ‘a bewildering litany of otherworldly research papers commissioned from scientists around the globe’.

• Unless the Russians or Chinese have torn a wormhole through the fabric of space-time with a laser weapon recently, it isn’t they who have the Pentagon delving into invisibility cloaking, dark energy, stargates, multidimensional manipulation, meta-materials, laser weapons, quantum entanglement and “controlling external devices in the absence of limb-operated interfaces”. Who were the academics and scientists writing these advanced technology research papers for the U.S. government and why?

• Many of the academics who wrote the ‘Advanced Aerospace Threat Identification Program’ (AATIP) research papers were already part of the now-defunct “National Institute for Discovery Science”, which was well-known for its studies of UFO sightings, extraterrestrials and other “fringe” topics. Nevada businessman and UFO believer, Robert Bigelow founded the NIDSci. Bigelow’s friend, Nevada Senator Harry Reid, initiated the 2007 AATIP study, and it was Bigelow Aerospace which won the AATIP contract to manage its research.

• The largest single source of these Pentagon academic reports is EarthTech International of Texas, whose CEOs have close ties to Robert Bigelow and Bigelow Aerospace.

• One AATIP report on the topic of ‘Invisibility Cloaking’ was penned by the respected German scientist, Dr Ulf Leonhardt. Leonhardt is a noted global expert on quantum optics, which juxtaposes the fact nothing actually exists with photon manipulation. One day, this may potentially allow a military force to enter a country without being seen.

• Another AATIP author is former NASA propulsion engineer, Marc Millis. Millis claims he had an unexplained visionary experience where a ‘being’ produced a ball of energy which then entered his body. After attending a Silicon Valley venture capital event in 1999, Millis left NASA to pursue exotic technologies.

• While the Pentagon spent $22 million on its Advanced Aerospace Threat Identification Program, Nick Pope – formerly the “Fox Mulder” of Britain’s own governmental UFO research department during the 1990’s, notes that, “It still doesn’t give us a definitive answer to whether, as claimed, ‘foreign advanced aerospace weapon threats’ is coded language for UFOs.”

• Although it’s unknown if the AATIP paper convinced Senator McCain of a viable alien threat, it’s certain that former US President Ronald Reagan believed in such a possibility. Reagan’s numerous mentions of aliens in speeches marked him as a blatant “UFO-nut” hiding in plain sight. During the 1985 Geneva Summit, Reagan and Soviet premier Mikhail Gorbachev had a private chat. Years later, Gorbachev revealed that Reagan had simply asked him to set aside their differences in case the world was invaded by aliens. Reagan made public his concerns in a 1987 U.N. speech, saying, “I occasionally think how quickly our differences would vanish if we were facing an alien threat from outside this world. Yet, I ask you, is not an alien force already among us? What could be more alien to the universal aspirations of our peoples than war and the threat of war?”

• [Editor’s Note]   This is a typically snarky British Deep State response to the revelation that the Pentagon brass and top politicians take the type of exotic propulsion and other technologies exhibited by UFOs very seriously. While describing the origins and authors of the Pentagon’s AATIP research from 2007 to 2012, the writer employs ridicule and derision to portray the AATIP authors as a bit unhinged, debunking the motive of commissioning such research programs, and condemning the reports as a waste of time and money. Even the article’s title makes a joke out of an alien invasion. And therefore, it is a waste of time for anyone to take the Pentagon’s exotic propulsion and technology programs seriously. In other words, don’t believe the evidence you see before you, believe us (the Deep State) when we tell you that none of it matters. Life will continue as it is with fossil fuel engine propulsion, and any new technologies will only come to the public in small drips … and you’ll like it.

“THERE are a number of people here who know everything on that screen was absolutely true,” said the President. A wave of nervous laugher rippled through the White House’s private cinema room. Ronald Reagan, however, never broke a smile, his solemnity immediately silencing the intimate audience of esteemed guests – Neil Armstrong, Steven Spielberg, high-ranking military personnel and the upper echelons of Nasa among them. It was 1982 and the group had just been treated to a special pre-release screening of ET: The Extra-Terrestrial.

Despite its rather outré nature, this tale is no urban myth – although some details have been embellished over the years. One retelling even has Reagan weeping on Spielberg’s shoulder as ET “went home”. Having since confirmed the event indeed took place, the legendary director has also admitted he remains unsure if Reagan was being honest with his guests – or simply pulling off deadpan surrealism better than Rikki Fulton or Jacob Rees-Mogg.

One thing is incontrovertibly true – if Ronald Reagan had intimate knowledge of extra-terrestrial visitations to Earth, then he certainly knew they weren’t friendly, doe-eyed botanists. Without even taking his bizarre satellite-laser “Star Wars” missile defence system into consideration, Reagan’s numerous mentions of aliens in speeches marked him as a blatant UFO-nut hiding in plain sight. One turning a blind eye to the Pentagon burning through tens of millions of taxpayer dollars investigating “foreign advanced aerospace weapons”.

Yet, if such research – carried out under different guises by the US military since Project Blue Book in the 1950s – was simply to ascertain the threat from traditional Russian or Chinese bogeymen, then it seems they were a wee bit more technologically advanced than previously thought.

This week, the Pandora’s Box of top secret Pentagon documents was declassified under a Freedom of Information request – a single five-page letter containing the titles of a bewildering litany of otherworldly research papers commissioned from scientists around the globe.

If nothing else, the document – addressed primarily to the office of late Senator and former pilot John McCain, who also had a considerable interest in colourful accounts of unusual aviation – certainly proves the Pentagon had been trying to get their heads around the true nature of a somewhat peculiar security threat. And unless the Russians or Chinese have torn a wormhole through the fabric of spacetime with a laser weapon recently, it wasn’t them.

THE exotic nature of some of the research papers commissioned by the US military’s Advanced Aerospace Threat Identification Program (AATIP) would raise a quizzical eyebrow on even Vladmir Putin’s Botox-irrigated deathmask.
It’s certainly reaffirmed the suspicions of the global Ufology community, who only learned of the research papers’ existence last week after the AATIP letter ended up on the desk of Nick Pope, ex-head of the UK Government’s official UFO research project. Colloquially known as Britian’s “Fox Mulder”, the affable Nick immediately teased true believers on Twitter with some ambiguous speculation, saying: “It still doesn’t give us a definitive answer to whether, as claimed, ‘foreign advanced aerospace weapon threats’ is coded language for UFOs.”