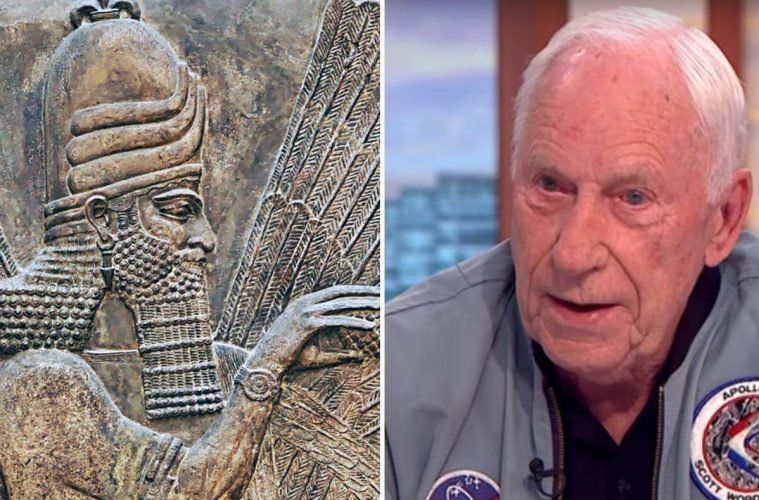 • In the 5:32 minute video interview below, Al Worden (pictured above), the Command Module Pilot for the Apollo 15 lunar mission in 1971, shares his beliefs about extraterrestrials and humanity’s origin on the Earth. “We are the aliens, but we just think they’re somebody else. But we’re the ones who came from somewhere else. Because somebody else had to survive, and they got in a little space craft and they came here and they landed and they started civilization here, that’s what I believe. And if you don’t believe me, go get books on the ancient Sumerians and see what they had to say about it, they’ll tell you right up front.”

• Dr. Edgar Mitchell, the Lunar Module Pilot of Apollo 14 who walked on the Moon, revealed that there “have been crashed (ET) craft, and (ET) bodies recovered,” and that he “happens to be privileged enough to be in on the fact that we are not alone on this plant ” and we have “been visited many times.”

• Dr. Brian O’Leary was part of a group of ‘scientist-astronauts’ who trained for an Apollo Moon program in the 1960’s that was ultimately cancelled. Dr O’Leary stated that there is “abundant evidence that we are being contacted (by ETs).”

• Joining these astronauts in revealing the truth about the historic ET presence here on Earth is a long and growing list of hundreds, if not thousands of high ranking military personnel, political figures, academics. On top of this, we have hundreds of thousands of pages of documented cases of UFOs and ETs that have been released by multiple governments. Mainstream media outlets which used to criticize and ridicule the subject now seem to be taking measures to bring more credibility to the UFO topic.

• Over the past seventy years, our government and the mainstream media have routinely deceived us. This subject has been swept under the radar by so many people, for so long, yet suddenly we’ve had this burst of information that’s made it clear to most that something is going on here.

• [Editor’s Note] Worden’s account that the human race is descended from people who “got in a little space craft… came here and… started [a] civilization here… to survive” closely resembles recent information that the survivors of the planet Maldek explosion, which devastated Mars, traveled inside of the Moon to the Earth’s orbit and eventually inhabited the continent of Atlantis, which became Antarctica after a pole shift around 12,000 years ago. Although they were not the original Earth humans, they played a major role in genetically enhancing the primitive indigenous humans that they found here to spawn the modern human species.

The list of astronauts who have shared their knowledge and beliefs about UFOs and intelligent extraterrestrial civilizations that are or have been visiting our planet is extensive, and growing. Apollo 14 astronaut Dr. Edgar Mitchell, for instance, once told us there “have been crashed craft, and bodies recovered,” and Dr. Brian O’Leary told the world there is “abundant evidence that we are being contacted.” Still more, like Gordon Cooper and Story Musgrave, have all made some interesting remarks about this topic.

Also joining them is a long and growing list of hundreds, if not thousands of high ranking military personnel, political figures, academics, and many more.

On top of this, we have hundreds of thousands of pages released by multiple governments that document these cases. Although we may not know exactly what is going on, we know something is.

All of this information that’s leaked over the past few years has also provoked a response from mainstream media outlets, which used to criticize and ridicule the subject. Now, they are taking corrective measures to bring more credibility to this topic, if poorly.

This has been seen with recent citizens hearings about UFOs, as well as celebrities like Tom Delonge creating awareness initiatives in conjunction with people from major corporations and intelligence agencies.

Take the founder of Bigelow Aerospace, for example, who is one of many who has shared his knowledge about the fact that we are not alone, and that we are being visited.

This subject has been swept under the radar by so many people, for so long, yet suddenly we’ve had this burst of information that’s made it clear to most that something is going on here.

The more popular this subject gets, the more it enters the mainstream arena, and the more we need to put our critical thinking caps on.

For years, governments and intelligence agencies have had a very heavy interest in this subject. All of the mainstream organizations created to investigate this phenomenon, like NICAP and MUFON, originate from the intelligence and defence community. This is a common trend with regards to mainstream initiatives dealing with the UFO/extraterrestrial subject.

The point is, our government and mainstream media routinely deceive us about important topics. Yet people look to them as reliable sources of information, even though mainstream media has direct connections to the intelligence community and is controlled by a small group of financial elite with very specific agendas.