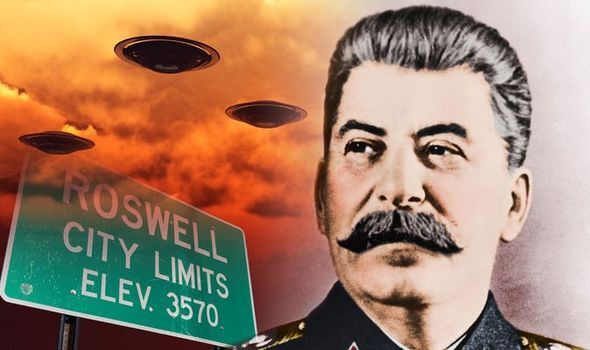 • Annie Jacobson, “investigative journalist” and author of the book: Area 51: An Uncensored History of America’s Top Secret Military Base, told Fresh Air podcast recently that the Roswell, New Mexico crash in the summer of 1947 was neither an extraterrestrial craft or a weather balloon. It was, according to Jacobson’s “source” and detailed in her book, a Soviet ‘dark propaganda’ program to create panic in the United States over an alien invasion.

• During World War II, Nazi doctor Josef Mengele had conducted horrendous human experiments at Auschwitz and had become known as the ‘Angel of Death’. After WWII, Soviet dictator Joseph Stalin captured Mengele and tasked him with creating “grotesque, child-size” pilots who could be placed on board a small plane which was flown remotely to the United States. US citizens would see the “grotesque” children, think they were aliens, and cause mass hysteria. There are scant details on how this actually may have happened. “[I]t was a warning shot over President Truman’s bow, so to speak,” said Jacobson.

• “If you look at the timeline with Josef Mengele, he left Auschwitz in January of 1945 and disappeared for a while, and the suggestion by my source is that Mengele had already cut his losses with the Third Reich at that point and was working with Stalin,” claims Jacobson.

• The Soviet Union didn’t have nuclear weapons capability at the time, so they employed this interplanetary hoax. Said Jacobson, “[O]ne of the most interesting documents is the second CIA director, Walter Bedell Smith, memos back and forth to the National Security Council talking about how the fear is that the Soviets could make a hoax against America involving a UFO and overload our early air-defense warning system, making America vulnerable to an attack.”

• [Editor’s Note]   It appears that the Deep State propaganda machine is running in high gear to dump as much disinformation on the public as possible with regard to the UFO phenomenon and the continuing extraterrestrial presence on and around our planet. Deep State shills like Jacobson use the time-tested method of taking an actual historic event and then adding new pieces of information to twist and turn it into something completely different. Whether it is plausible or not is not the point. The goal is to create so many possibilities that the public cannot determine the real truth. People become exasperated with so many ‘explanations’ that they get tired of hearing about it, and mentally block it. It is just another psy-op to distract people from what is truly going on.

In 1947, a mysterious flying disc was reported to have landed in the desert of New Mexico near the town of Roswell. The US Air Force rushed to the scene and claimed a weather balloon had crashed, but 70 years later, conspiracy theorists still maintain an alien flying saucer had crashed. However, one researcher believes both of these claims are false, and that the crash was that of a Soviet plane carrying deformed soldiers which was sent to spy and spook US citizens.

This is at least according to journalist Annie Jacobson who believes the Soviet Union was employing “dark propaganda” to send the US into meltdown.

Following the end of the Second World War, Soviet dictator Joseph Stalin employed Nazi doctor Josef Mengele, who had conducted horrendous human experiments at Auschwitz and had become known as the ‘Angel of Death’, to create “grotesque, child-size” pilots who could be placed on board a small plane which was flown remotely.

In return for Dr Mengele’s experiments, Stalin promised the former Nazi a eugenics lab where his unethical experiments could continue.

After the ‘child pilots’ were created, of which there are scant details on how this actually happened, Stalin and the Soviet Union sent them on a small aircraft to the US.

The plan was then to have the plane land in the US, where citizens would see the “grotesque” children and think they were aliens and cause mass hysteria – similar to the 1937 radio broadcast of Orson Welles’ War of The Worlds, according to Ms Jacobson, who authored the book Area 51: An Uncensored History of America’s Top Secret Military Base.

Ms Jacobson told the Fresh Air podcast: “The child-sized aviators in this craft were the result of a Soviet human experimentation program, and they had been made to look like aliens a la Orson Welles’ War of the Worlds, and it was a warning shot over President Truman’s bow, so to speak.