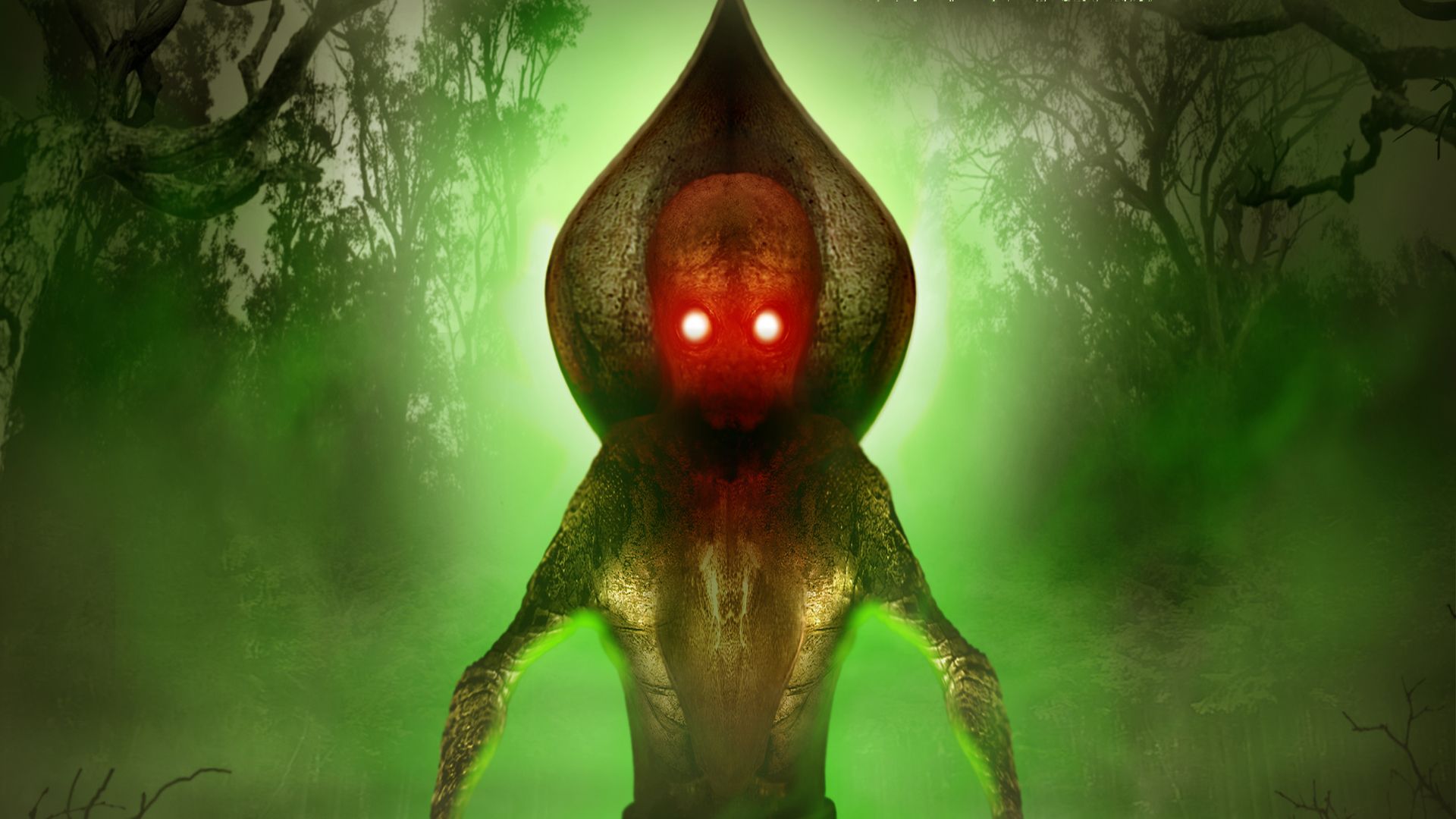 • Gray Barker is a well-known UFO conspiracy theorist from Braxton County, West Virginia. He got his start as a writer by telling the story of the ‘Flatwoods Monster’ of 1952, which led to his own series of paranormal publications.

• David Houchin maintains the ‘Gray Barker UFO Collection’ at the Clarksburg Library in Clarksburg, West Virginia. In 1952, when Barker was dabbling in film distribution and booking in Clarksburg, he heard or read about the Flatwoods incident. Barker went to Braxton County to interview the people involved with the Flatwoods Monster incident. The Flatwoods encounter was prominently featured in his publication, The Saucerian, and in his book, They Knew Too Much About Flying Saucers. Barker was the first to introduce the idea of the government’s “Men in Black”, and “used the Flatwoods incident as his springboard to becoming a more or less respected UFO researcher out on the fringe,” says Houchin.

• When the Flatwoods Monster story emerged in the early 1950’s, it was just after the Roswell UFO crash. The public was eager for tales of space aliens, and the Flatwoods story quickly gained traction. It put Braxton County, West Virginia on the map. Some believed that the whole thing was a made up hoax, or mass hysteria. Houchin says that he actually met the family who were at the center of the incident. They were very adamant about what they saw.

• The story begins on September 12, 1952 in Flatwoods, West Virginia. A local resident, Mrs. May, her sons, their friends, and their dog were outside when they saw a bright light in the sky circle around the hill and crash. They thought it might have been a meteor, and so they all walked up the hill to the crash site. When they got up there, there was a glowing red orb in the ground. The air was filled with acrid-smelling oil and smoke. The dog was terrified.

• As they got closer to the glowing orb, they noticed a figure standing over to the side of them. It was humanoid in shape, nearly 12 feet tall with a head shaped like the ace of spades and wearing a metal suit. Mrs. May and the children ran home, and reported it to the authorities. The US government sent some ‘Men in Black’ to their house to investigate the sighting. They took the each of Mrs. May’s family members’ witness reports – and all were consistent. Mrs. May had gotten some of the acrid oil residue from the ship on her dress that night. They took the dress and never returned it

• A video game that features places and things in West Virginia called “Fallout 76”, has renewed interest in the Flatwoods Monster. People visit the museum as part of a “Fallout Tour,” where they visit places featured in the game.

FLATWOODS, W.Va. – On September 12 in 1952, a family in Flatwoods said they were visited by an alien

Jason Burns, a storyteller who specializes in paranormal stories in West Virginia, told the story of what happened that night.

“Mrs. May, her sons, their friends, and a dog were outside playing when they saw this bright light in the sky. They saw it circle around the hill and crash, and they thought it might have been a meteor or something like that, and so they all walked up the hill to where the crash site was, and when they got up there, there was this glowing red orb in the ground. The air was filled with smoke. It was very acrid smelling apparently. Oily kind of air and the dog got close to it and just ran away. The dog was terrified and not wanting anything to do with whatever the ship was or whatever this object was. And as they got closer to it, they noticed that there was a figure over to the side of them,” said Burns.

According to legend, the monster was nearly 12 feet tall with a head shaped like the ace of spades. It was glowing reddish

and green, but some believe that the color of the grass and the ship was reflecting off a metal suit that the alien was wearing.

“When they saw the monster or alien, Mrs. May and the children all ran off to their home, and they reported it to the authorities. Apparently, the US government sent some men—‘men in black’ to their house who investigated the sighting, took down their witness reports–which apparently all of them were the same. Mrs. May got some of the oil on her dress that night from the ship, and they took the dress. They said that they would return it, and they never did,” said Burns.

Conspiracy theories on what the monster was began to pop up as the story gained traction. Some theories suggest that it was just a kid pulling a prank or an owl.

“They tied it in with other stories around the country about the same time,” explained Burns, “This was the age of the space race, so there was a lot of interest in interstellar crafts. This was the time of Roswell. This was the time of Sputnik and things like that that were getting ready to take off, so it was very forefront in people’s minds. So people were thinking maybe it was just mass hysteria,

maybe it was fake, maybe it was just made up, but I actually have met the Mays at one point years ago. A long time ago, in Flatwoods at one event, and they are very adamant, they saw what they saw. And I believe they believe—you know, I believe them. What they say they saw. Now what it was, I don’t know.”

Gray Barker, a well-known UFO conspiracy theorist from West Virginia, had a part in boosted the national popularity of the monster story by telling the story in several of his publications.

“Barker was from rural Braxton county. He was born on a farm at Riffle, and he was one of the only two kids in his family to get a high school diploma and only one to go on to college. I think he had ambitions to be a writer, but that doesn’t work out for everyone, and in the end he became a writer courtesy of the space brothers and the men in black,” explained David Houchin, the Special Collections Librarian at the Clarksburg Library who maintains the Gray Barker UFO Collection. “In 1952, he was living in Clarksburg, and working in businesses that had to do with film distribution, film booking—that kind of thing, and he heard about the Flatwoods incident. I imagine that he read about it in the newspaper. It was treated pretty confidently as a serious mystery for a short time, and he was familiar with Braxton county and he was fond of the preternatural. The spooky.”

Gray Barker went to Braxton County to interview people who knew about the Flatwoods Monster incident, and the following year, he began his own publication called The Saucerian. The first issue was devoted to the Flatwoods Monster. In 1956, he wrote up the story again in his book “They Knew Too Much About Flying Saucers,” which arguably introduced the idea of the “men in black” to alien conspiracy stories and became popular amongst UFO conspiracy theorists across the nation.