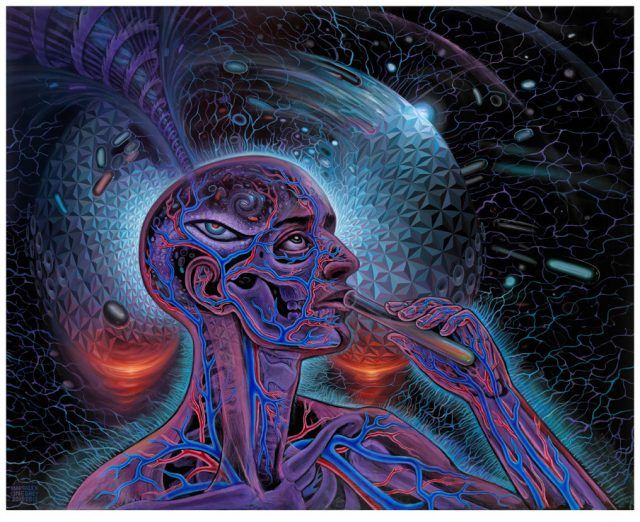 Close Encounters of the Alchemical Kind

• In the 1950’s, Extraterrestrial contactees like George Adamski and Truman Bethurum who claimed that the ET’s were concerned about our proliferation of nuclear weapons were casually dismissed as a psychological response to Cold War anxiety.

• But a 1960 French book by Louis Pauwels and Jacques Bergier reveals that these types of warnings were made by alchemists in the 1930’s.

• In Paris in 1937, Bergier, who had been working on nuclear energy, had a meeting with a mysterious man who told him, “the work you and your peers are doing is terribly dangerous. And it is not only you who are in peril, but the whole of Humanity.”

• The mystery man said, “We Alchemists have known about this for a long time,” and warned that atomic explosives manufactured from only a few grams of metal would have the power to vaporize entire cities.

• The mystery man then read a passage from a book: “There existed in the past civilizations who knew the energy of the atom and were totally destroyed for the misuse of that power.”

• Our future depends on who is in control of our technology. As Werner von Braun said, “Science does not have a moral dimension. It is like a knife. If you give it to a surgeon or a murderer, each will use it differently.”

“There is nothing new except what has been forgotten.” – Mademoiselle Rose Bertin, French milliner and dressmaker to Marie Antoinette.

UFOlogy is a senile discipline. By this I’m not referring to its age, or how after more than 60 years it hasn’t seemingly come any closer into solving the enigma which spawned its existence. What I mean is that UFOlogy as a field has the terrible tendency of narrow-sightedness, and of forgetting the valuable lessons from the past. Some of our critics on UFOs: Reframing the Debate, for example, complained we weren’t really saying anything particularly original compared to the thinkers and ideas of the late 60’s and early 70’s; our defense was we weren’t actually trying to be novel so much as remarking what was pointed out by the true mavericks preceding us, but hasn’t been paid attention to enough by the newer generations… to the detriment of the study of unidentified flying objects, and the intelligence(s) in control of them.

Take for instance the controversial topic of the Contactees: Most people believe it was in the 1950’s when common citizens like George Adamski or Truman Bethurum began claiming to be in contact with extraterrestrials hailing from Venus, Jupiter –or far more exotically-named planets like Clarion– and the main concern of our Space Brothers was the proliferation of nuclear weapons in our world, and the threat they posed to the survival of Humanity… or even to the stability of the entire Cosmos. Psychologists have tried to explain the sociological phenomenon of the Contactees as stemming out of Cold War anxieties, and a religious need from saviors from on-high repackaged for the consumption of the Space Age.

But those psychologists –and even most UFOlogists– would be surprised to learn warnings against a nuclear Armageddon can be traced back before the start of the Cold War and the Space Age –before even the fission of the atom had been experimentally achieved for the first time by German chemist Otto Hahn in 1938! And these warnings didn’t come from long-haired Venusians on board silvery saucers, but from a secretive individual who claimed to be in possession of a powerful legacy of knowledge, assembled from the scattered remains of a lost civilization.

These warnings came from an Alchemist.

The story I’m about to tell can be found in a book I consider to be indispensable reading by anyone interested in these topics: “Le Matin des Magiciens” (Morning of the Magicians) by Louis Pauwels and Jacques Bergier. Alas, this gem is barely known among most English-speaking UFO circles for three main reasons: It was published in 1960 (strike one); its main topic is not UFOs but philosophy and secret knowledge (strike two) and it was written by two French men (strike three! You’re out!!).

Louis Pauwels (1920-1997) was a writer and journalist with a life-long interest in Eastern mysticism and the philosophy of Gurdjieff. In 1954 he met Jacques Bergier (1912-1978) whose life is probably more deserving of a motion picture than any lazy 80’s remake: Born in Ukraine and of Jewish descent, he was a writer as well as a chemical engineer who became a resistance fighter and spy during the German occupation of France, was later captured and sent to the Mauthausen concentration camp. After the Liberation he played a key role into the discovery of the Nazi nuclear program, and how far they have gone into the development of atomic weaponry.

Bergier was credited by his friends for having a prodigious intelligence and encyclopedic knowledge. When he was 6 years old he saw an ancient woodcut illustration of two old alchemists working on their lab, which sparked his interest in the forgotten lore of Alchemy. To him the modern discoveries about radioactivity and the composition of the atom held the promise of unlocking the true secret behind the transmutation of the elements, and creating a bridge between the Past and the Future.

But his contemporaries not only considered Alchemy a superstitious nonsense (the way we still do to this day) but even nuclear energy was still regarded a ‘fringe’ subject in theoretical physics, with no possible applications in real life (just like electricity and magnetism in the XVIIIth century). In 1933 Bergier is scolded by a teacher of his –one of the best chemists in all of France– for wasting his time in such ‘infantile’ interests as nuclear physics, and admonishes him to pursue a ‘sensible’ career in the sugar refinement industry instead.

Thankfully to us Bergier was not only smart; he was also stubborn, bless his heart. He disregards the advice and continues his ‘reckless’ studies in both cutting-edge physics and ancient Alchemy. From 1934 to 1940 he became a collaborator of the eminent physicist and chemist André Helbronner, who was among the first scientists trying to unravel the secret behind atomic energy, before he was murdered by the Nazis in 1944.

It was at the behest of Helbronner that Bergier had a strange meeting with a mysterious individual on June of 1937, two years before Germany invaded Poland and WWII began. The meeting took place in an empty testing lab owned by ‘Gas Society’ of Paris. The strange man started the conversation by saying he knew Bergier assisted Helbronner in the quest of the atomic secret, and mentioned their recent success in unleashing radioactivity in polonium.

“You are very close to success, as are many other contemporary wise men,” said the stranger (remember Hahn’s experiment in ’38) “but the work you and your peers are doing is terribly dangerous. And it is not only you who are in peril, but the whole of Humanity.”

The man explained to Bergier the liberation of nuclear energy was easier than what was believed at the time, and the resulting superficial radioactivity could poison the entire planetary atmosphere in just a matter of years. He also warned that atomic explosives could be manufactured using only a few grams of metal and they would have the power to vaporize entire cities. “We Alchemists have known about this for a long time.”

Before Bergier could protest or ask any questions, the man continued: “I know what you are going to say –that Alchemists didn’t know the structure of the atomic nucleus, didn’t have electricity or any detection methods. Therefore they could never release the nuclear energy. I shall not try to prove what I am about to tell you now, but I beg you to repeat this to monsieur Helbronner: It only takes certain geometric assemblies, without the need for electricity or a vacuum medium. And now I will limit myself to reciting a few lines…”