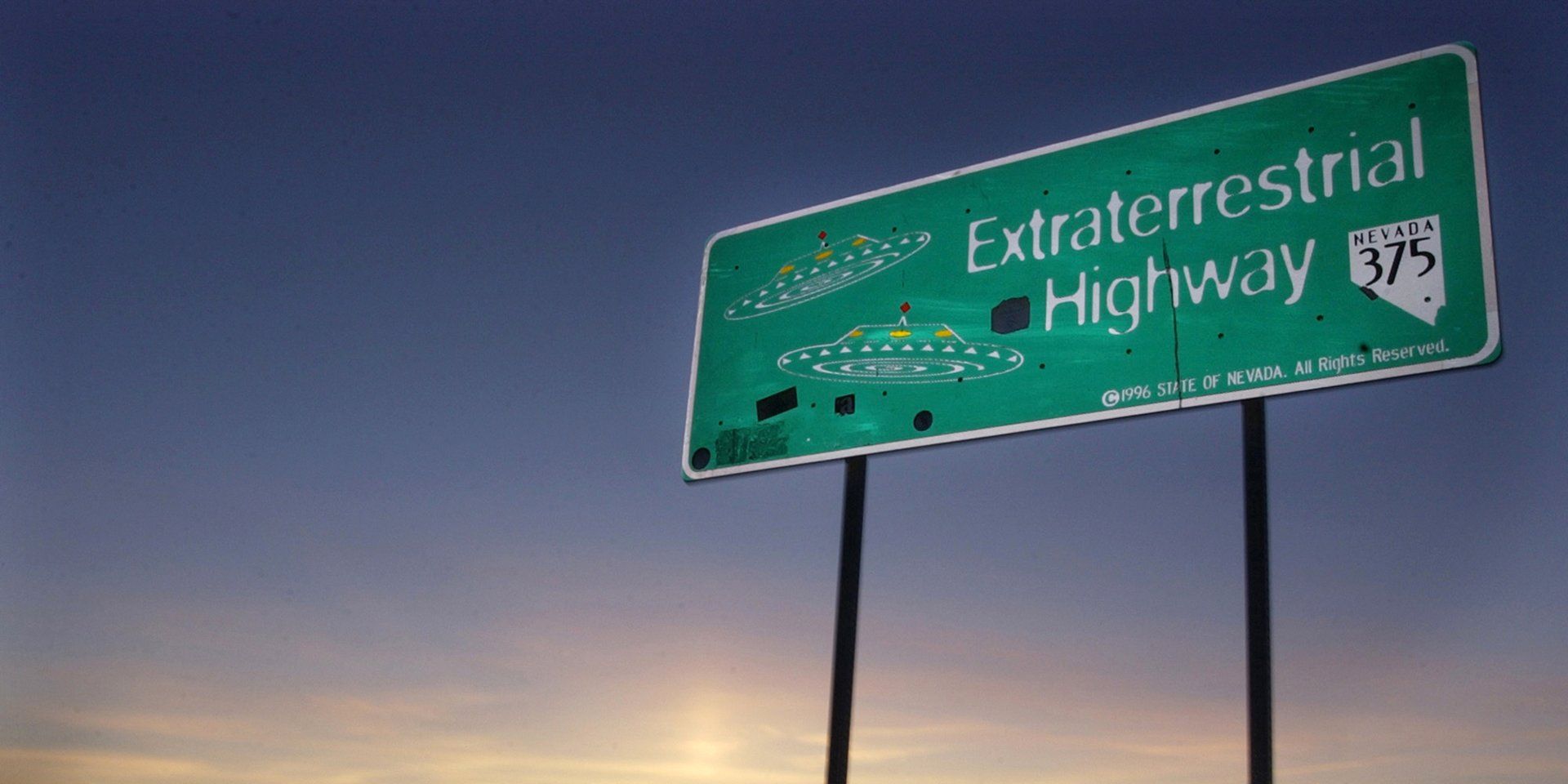 Communities Near Area 51 Brace for Influx of UFO Tourists

• A Facebook event entitled “Storm Area 51, They Can’t Stop All of Us” has created an internet frenzy. To date, almost 2 million people have RSVP’d for the September 20th gathering. The event’s organizer, Matty Roberts, claims it was a hoax. The Air Force has warned against anyone breaking into the property at the Nevada Test and Training Range, Nellis Air Force Base, commonly known as Area 51.

• Vern Holaday, 59, owns the Alamo Inn in Alamo, Nevada, north of Las Vegas. Holaday recalls that in the fall of 2009, his hotel hosted an annual UFO conference, and the secretive goings on at Area 51- about 35 miles to the west of Alamo – inevitably came up. A man from Ohio suggested that they storm Area 51 on motorcycles to outrun the military guards. Nothing ever came of it.

• Tourism from extraterrestrial enthusiasts began to boom in 1989 when an Area 51 engineer by the name of Bob Lazar told a Las Vegas television station that he’d worked on extraterrestrial aircraft at the facility. Since then, business owners and residents have welcomed tourists hoping to get a peek at the military facility or spot a UFO in the sky.

• When Holaday heard about the recent Facebook event, “All I thought was, ‘Here we go again.” Holaday has only two rooms still available for the event. Other local motel and campground owners are receiving scores of calls every day. Many are excited for the potential business. Some, though, are concerned about the lack of infrastructure to accommodate the potential crowds.

• “This is the most overwhelmed I’ve ever felt in my entire life,” said Connie West, co-owner of the motel, bar and restaurant called Little A’Le’Inn, located in a small town called Rachel on State Route 375, named the “Extraterrestrial Highway”, about 50 miles northwest from Alamo. She has been inundated with calls about everything from room bookings to bands that want to play on her property during the event. Like Holaday, she’s heard the conspiracy theorists’ talk of invading Area 51 for years, but nothing of this magnitude. “It’s a frenzy,” she said.

• The Little A’Le’Inn being the only bar within 100 miles, Connie West is stocking up on food and alcohol, as well as t-shirts, mugs and other novelty items for the gift shop. West is also in the process of clearing more land to make room for campers. Says West, “… conspiracy theorists, UFO believers and astronomy buffs… All are welcome.”

• But West is concerned about people getting hurt or arrested trying to make their way to Area 51. Some have speculated that local law enforcement will shut down roads leading to the military facility to prevent anyone from getting close. Lincoln County Sheriff Kerry Lee said he could not discuss the details, but that the agency was prepared. Nellis Air Force Base said in a statement that “any attempt to illegally access the area is highly discouraged.”

• Misty Ingram, who works at the Alien Research Center novelty shop about 40 miles south of Rachel, said she hasn’t been able to keep t-shirts on the rack in the last few weeks. The best-selling items are the black T-shirts with red and white lettering that read: “Area 51, Groom Lake Research Facility S-4, WARNING, restricted area, use of deadly force authorized.” Ingram says, “I think it’s ridiculous that anyone thinks they are going to get into Area 51.” Ingram believes the event will morph into more of a makeshift festival than a raid.

• One night a while back, Holaday and some UFO-seeking guests drove down the Extraterrestrial Highway into Tikaboo Valley to a black mailbox in a dusty lot on the side of the road. Holaday said the mailbox belonged to a local rancher, but somehow over the years many came to believe it was a spot where aliens communicated with humans. Although the mailbox has been replaced since then, on a recent visit it was still stuffed with hand-scrawled notes, including one that read, “Dear Aliens, please take Donald Trump.”

ALAMO, Nev. — The first time Vern Holaday heard people talk about trying to storm Area 51, he was sitting around a campfire with about a dozen UFO enthusiasts outside the motel he owns in Alamo.

It was the fall of 2009, and the 15-room Alamo Inn was hosting an annual UFO conference. As it usually did, the conversation turned from alien life forms to conspiracy theories about Area 51 — the secretive military facility about 35 miles west of Alamo.

That night, a man from Idaho, who worked on motorcycles for a living, suggested to the others around the campfire that they could rush the facility on motorcycles, believing the military guards wouldn’t be able to stop them that way, Holaday recalled.

Nothing ever came of that scheme beyond campfire chatter, but Holaday, 59, thought of it recently when a Facebook event, titled “Storm Area 51, They Can’t Stop All of Us,” set off an internet frenzy. Even though the event’s creator, Matty Roberts, claimed it was a hoax and the Air Force warned against anyone breaking into the property — located within the Nevada Test and Training Range at the Nellis Air Force Base — almost 2 million people have RSVP’d on Facebook for the Sept. 20 gathering.

“All I thought was, ‘Here we go again,’” Holaday said, chuckling. As of this week, his motel, about 90 miles north of Las Vegas, had only two vacant rooms left for the days of the event.

Tourism drawn by talk of extraterrestrial activities has been a part of the economy for decades in the small towns that dot the valleys near Area 51. The boom began around 1989, when Bob Lazar, a self-described engineer, claimed to a Las Vegas television station that he worked on extraterrestrial aircraft that were housed at Area 51. Since then, business owners and residents have welcomed tourists hoping to get a peek at the military facility or spot a UFO in the sky.

But the Facebook event has ramped up buzz to levels residents have never witnessed, with motel and campground owners receiving scores of calls a day. If the event brings the masses it’s promised, many in the area are excited for the potential extra business. Some, though, are also concerned about the lack of infrastructure to accommodate the crowds that could attend.

“This is the most overwhelmed I’ve ever felt in my entire life,” said Connie West, who co-owns a motel, bar and restaurant called Little A’Le’Inn with her mother in Rachel, a tiny town about 50 miles from Alamo. Since the end of June, her business has been inundated with calls about everything from room bookings to bands that want to play on her property during the event. Like Holaday, she’s heard the conspiracy theorists talk of invading Area 51 for years, but nothing of this magnitude. “It’s a frenzy,” she said.