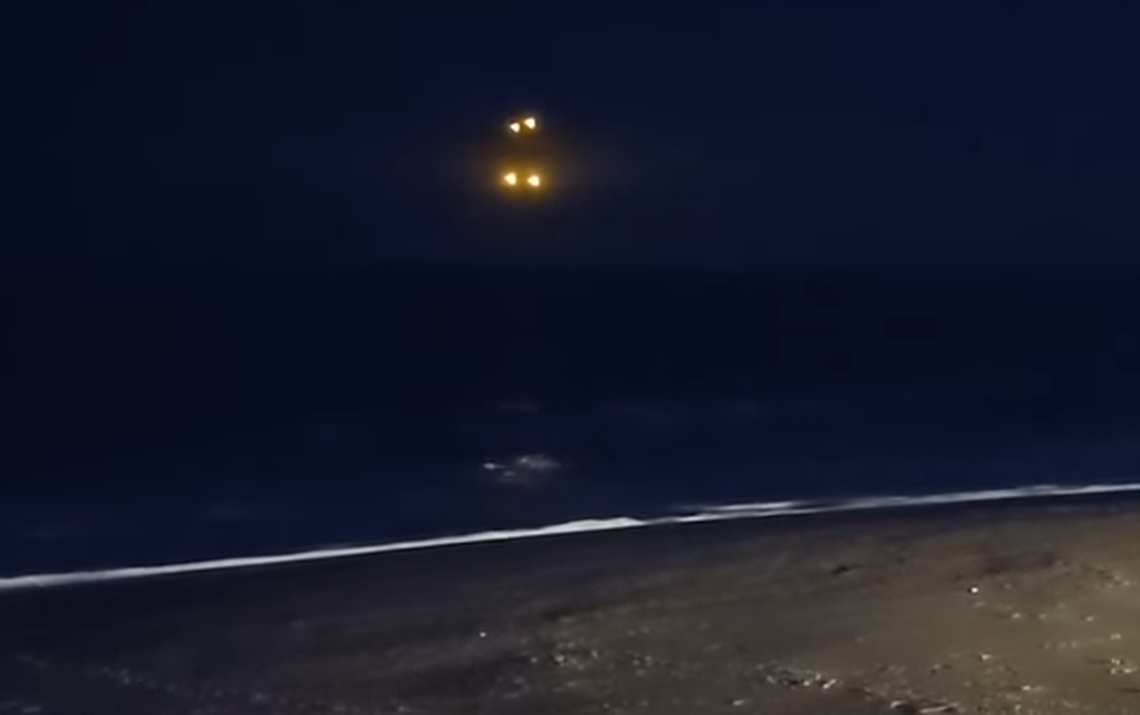 • Last November, a fisherman on Cape Lookout (southern Outer Banks of North Carolina) caught strange lights hovering over the ocean late at night. Two glowing orange orbs appeared in the distance, then two other white lights joined them. These smaller white orbs then turn the same orange hue as the original pair. Then one pair drops out of sight leaving one pair remaining. (See 1:32 minute video below, courtesy of C.R. Larkin, ViralHog and the Charlotte Observer)

• According to the Charlotte Observer, this is not an unusual occurrence for residents of the area. The phenomenon has been occurring for more than two decades.

• Some viewers commented that it was probably parachute flares, although flares flicker and arc in the sky and these particular lights did not. Others suggested that the orbs were flames off the top of an oil rig. But there are no oil rigs out there. Cape Lookout lighthouse wasn’t the source of the strange lights either. Could they have been Marine Corp craft or drones returning to the Air Station New River? There are no reports of this. And wouldn’t the local population be used to seeing and identifying them?

UFOs are a hot topic again thanks to the extremely popular History Channel show, Project Blue Book. People want to believe, they really do. That is why whenever a sighting is reported, it usually turns into a viral news story.

Last November, a fisherman on Cape Lookout caught strange lights hovering over the ocean late at night. According to the Charlotte Observer, this is not an unusual occurrence for residents of the area. The phenomenon has been occurring for more than two decades.

In the fall of 2018, we reported on a North Carolina man that supposedly captured an unusual craft on his cell phone. This account later turned out to be debunked. It was deemed an optical illusion.

However, the sighting on the Outer Banks is something else entirely. At first, you see two glowing orange orbs in the distance. But then, out of nowhere, two other lights join. These smaller ones are white in color and then turn the same hue as the original pair.

After a bit of hovering together, one pair drops out of sight leaving one remaining. It is fascinating to watch. Check out the clip courtesy of C.R. Larkin, ViralHog and the Charlotte Observer.

Much like the Phoenix Lights incident, some viewers commented on the video claiming that it was probably parachute flares. Although, as everyone knows, flares flicker. These particular lights did not.

Also, if they were distress flares and anyone that has watched Deadliest Catch on the Discovery channel can attest, they arc into the sky. Others felt that more than likely, the orbs were flames off the top of an oil rig. While there was a proposal by the Trump administration to “open the entire coastline of the lower 48 United States to oil and gas drilling, starting in 2019,” North Carolina chose preserving their ocean habitat over this initiative.

1:32 minute video of UFO over the Outer Banks of North Carolina