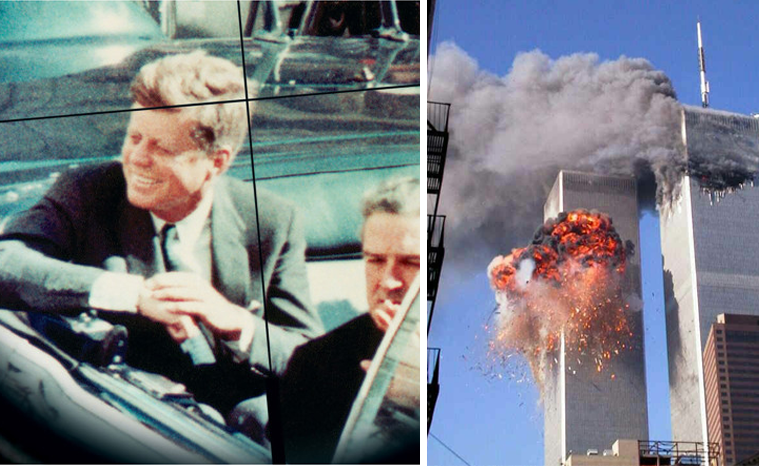 John F. Kennedy to 9/11: Everything Is A Rich Man’s Trick

• An ambitious documentary entitled “Everything is a Rich Man’s Trick”, written and narrated by Francis Richard Conolly, chronicles how the Mafia, crooked politicians, and the world’s most influential war profiteers orchestrated the assassination of President John F. Kennedy in 1963. And ever since then, these sinister puppet masters have functioned and thrived leading to the atrocities of 9/11, which Conolly also examines.

• Conspiracies such as the JFK assassination and 9/11 have served to awaken millions of people to the truth of how our world really works behind a dark curtain of illusion. The only conspiracy bigger than these is the cover-up of UFOs and the extraterrestrial presence.

• The nearly 3½-hour long video presents its findings in a measured and meticulous manner that demands attention and consideration.

What you’ll learn in this film you won’t learn in school… this is perhaps one of the greatest tricks of the elite. Convincing us we are learning what we think is ultimate truth when in reality much of the time they are careful lies.

Two conspiracies that are about as big and a globally important as the extraterrestrial cover-up are the JFK assassination and what happened in NYC on 9/11. Examining the utter lies of 9/11 and creating media about it has awoken millions and millions of people to the truth of how our world really works behind the curtain. This has been a hugely important event when it comes to that.
Recently, the long classified JFK files have been released to the public and they have been revealing in a number of ways, however, not everything has come out, and this has some people concerned of a greater cover-up.

Everything Is A Rich Man’s Trick

The assassination of President John F. Kennedy lingers as one of the most traumatic events of the twentieth century. The open and shut nature of the investigation which ensued left many global citizens unsettled and dissatisfied, and nagging questions concerning the truth behind the events of that fateful day remain to this day. Evidence of this can be found in the endless volumes of conspiracy-based materials which have attempted to unravel and capitalize on the greatest murder mystery in American history.

Now, a hugely ambitious documentary titled Everything is a Rich Man’s Trick adds fuel to those embers of uncertainty, and points to many potential culprits whose possible involvement in the assassination has long been obscured by official historical record.

Authoritatively written and narrated by Francis Richard Conolly, the film begins its labyrinthine tale during the era of World War I, when the wealthiest and most powerful figures of industry discovered the immense profits to be had from a landscape of ongoing military conflict. The film presents a persuasive and exhaustively researched argument that these towering figures formed a secret society by which they could orchestrate or manipulate war-mongering policies to their advantage on a global scale, and maintain complete anonymity in their actions from an unsuspecting public. Conolly contends that these sinister puppet masters have functioned and thrived throughout history – from the formation of Nazism to the build-up and aftermath of September 11.

The election of President Kennedy in 1960 represented a formidable threat to these shadowy structures of power, including high-profile figures within the Mafia, crooked politicians, and the world’s most influential and notorious war profiteers. Thus, a plot was hatched which would end Kennedy’s reign prior to any chance of re-election, thereby restoring the order and freedoms of these secret societies.