• The YouTube channel, UFO Mania, has released mysterious video that shows a huge UFO trying to hide behind the moon. The video was taken by Daniil Tumanny of Indianapolis, Indiana.

• The UFO seems to be so large in size that it appears right next to the Moon, and looks like a classic Hollywood space vessel. Is it going behind the Moon toward a ‘dark side’ base?

• Some YouTubers think that it is an alien craft. Others say that it indicates that Donald Trump’s Space Force is already operational and patrolling in ‘near space’.

• “At this point, people are so dumbed down you could have space ships flying all over the place and people wouldn’t even notice because they are too addicted to looking at their cellphones. I have seen many UFO’s flying around over my house in the last two years but who would believe me? It is sad how most humans are now just zombies,” commented YouTuber Synthia Burns.

• “A 500km diameter object not seen in any other country in the entire world… I don’t buy it. Besides it’s a computerized model of Kubrick’s space station in 2001: A Space Odyssey,” commented YouTube skeptic Diego Rucci.

Conspiracy theorists and alien enthusiasts have long been claiming that extraterrestrials from deep space used to visit the earth to monitor human activities. As per these conspiracy theorists, the rise in UFO sightings all across the world is an indication of alien activities, and some of them even believe that disclosure is going to happen soon. Adding heat to their views, popular conspiracy theory channel UFO Mania has now released a mysterious footage that shows a huge UFO trying to hide behind the moon.

The video was originally uploaded to YouTube by a user named Daniil Tumanny, but it gained popularity after it was shared by UFO Mania. In the video, the UFO which seems so large in size can be seen hovering very near to earth’s natural satellite. Interestingly, the shape and nature of the flying object spotted near the moon seem very similar to the alien vessels that we have seen in Hollywood sci-fi films.

As the video went viral on YouTube, most of the people who watched the clip argued that this UFO is nothing but an alien spaceship from the deep space. Some conspiracy theorists even went a step ahead and revealed that aliens have a secret base on the far side of the moon.

2:18 minute video of circular object hiding behind the Moon 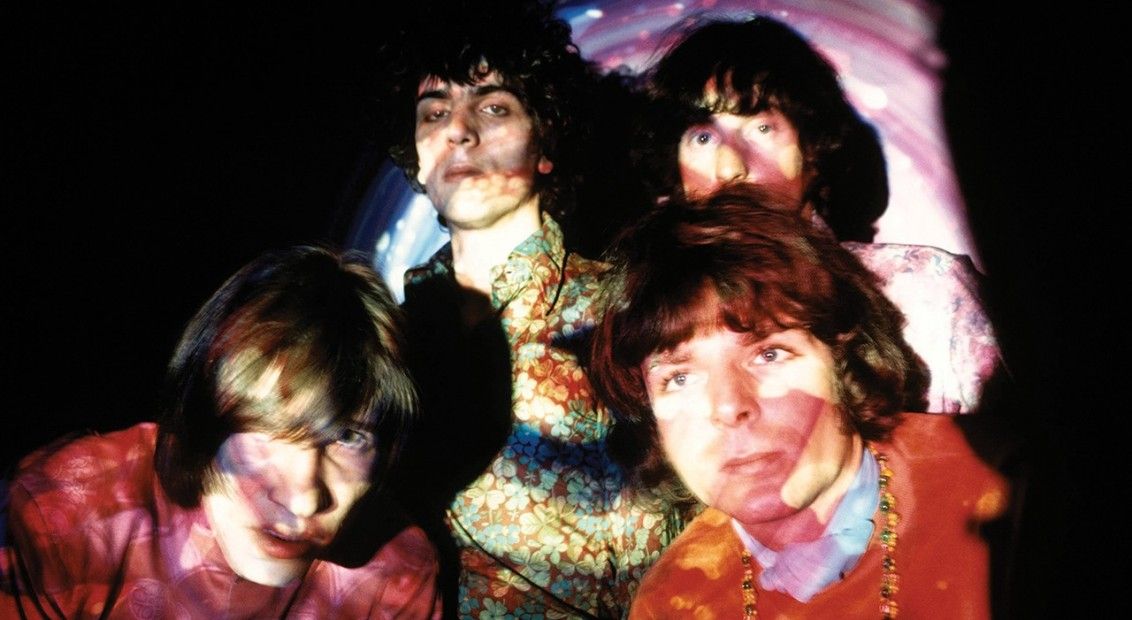 Ancient Civilizations and the Sixties: The Obsession with Ancient Astronauts

• The 1960’s was a decade when mainstream minds opened up to the possibility that we might owe a lot more to extraterrestrials than just compelling sci fi entertainment.

• Erich von Däniken’s book Chariots of the Gods?, published in 1968, explored the idea that alien beings visited Earth in the distant past, having technologies that we are only now capable of understanding. Chariots alludes to a Biblical prophesy of ET’s coming back to usher in a New Age. In II Kings 2:3-9 the prophet Elijah ascended to heaven in a “fiery chariot” with horses in a whirlwind. This was interpreted as a spacecraft. But Elijah was the herald who would signal the “Day of the Lord” (Yom Jahveh) and the last judgment. So the Bible’s apocalyptic scheme could be interpreted as a parousia of superior technology from outer space, constituting the New Age. And this New Age would only come when our own technology had reached a stage where we would not be paralyzed with awe and fear at the sight of an alien and their technology.

• Stanley Kubrick’s 1968 movie 2001 A Space Odyssey directly attributes the evolution of an ancient civilization to alien contact . And it involved a quasi-spiritual transformative experience as depicted in the film’s psychedelic tripping special-effects climax, which was well received by 1960’s audiences. Thus, the Sixties “Peace Movement” acquired spiritual, apocalyptic dimensions. “Evidence” for such celestial interest could be sought in the mysterious archaeology of ancient civilizations, while “psychics” provided extraterrestrial messages of tedious consistency: peace and love.

• The issue of an alleged alien role in human civilization was compounded by a prevalent suspicion that the Earth’s destiny was being secretly directed by “hidden masters”, in the U.S. generally identified with a secret government. This zeitgeist spawned numerous conspiracy/paranoia movies and shows such as the drama series The Invaders which posited the secret takeover of government agencies by aliens indistinguishable from human authorities, and the children’s adventure story “Tintin” where he accidentally uncovers underground primitive temples whose enormous stone figures strongly resemble astronauts. Tintin starts receiving telepathic messages as does a freelance UFO scientist who is in mental communication with aliens and who explains how the ancient people of the island worshiped extraterrestrials as gods. At the adventure’s climax, Tintin and friends are lifted from the exploding island by a flying saucer telepathically summoned.

• Possibly the first manifestation of the “counter-culture” as a self-conscious entity was seen in the free-spirit mindset of swinging London in the 1960’s. Much of it revolved around a Cambridge graduate nic-named “Hoppy” who walked away from a career as a nuclear physicist to form an underground photo exchange guild among the prominent faces in the London art and music scene, sort of like the first social media. This served to create a dynamic context for communication and knowledge, and a cohesive sense of belonging and common purpose within the London counter-culture. This led to Rhaune Laslett and others launching the infamous London “Free School” in Notting Hill, west London, a utopian place where people could be educated in esoteric knowledge. In 1966, Hoppy established the UFO Club, a popular venue that experimented in psychedelic light and sound. The Pink Floyd (with Syd Barrett) played there regularly and held a benefit show to raise money for the Free School.  (see 29:47 minute video of the Pink Floyd performing for swinging Londoners at the UFO Club, including John Lennon of the Beatles, below)

• The Free School was located in the basement of a house belonging to John Frederic Carden Michell. Michell saw the emergence of the UFO phenomenon as giving leverage to the opening of minds to new ideas about human origins. Michell offered Free School courses in UFO’s, ley lines, and Gnostic traditions. Michell supported William Blake’s dynamic psycho-spiritual and geographical myths, and believed that the British Isles held a unique role in the return of traditional consciousness to the world. And it was Michell who drew up the Glastonbury Festival “pyramid” stage on proper cosmic dimensions. Glastonbury stands today as a living monument to this fertile Sixties-based impetus.

Amid numerous secular apocalypses of the Sixties, we cannot ignore the remarkable impact of Erich von Däniken’s book Chariots of the Gods? (the question-mark is, note, frequently omitted). Published in 1968, Chariots of the Gods? explored the idea that alien beings visited Earth in the distant past and stimulated ancient civilizations with knowledge of interstellar travel and technical feats now familiar to viewers of the Sixties Space Race and Star Trek . While von Däniken took enormous liberties with “factual fiction” to produce a compelling bestseller, the book’s interest for us lies in how its extremely colorful story was interpreted.

Chariots of the Gods

Everything we have been discussing about the Sixties had fertilized the imaginative soil into which the “chariots of the gods” idea was cast. Not content with relating heavenly symbols in Akkadian tablets discovered in Mesopotamia to pre-Columbian inscriptions of deities in contexts which—with the benefit of imaginations primed for the purpose—could be interpreted as resembling “spacecraft”, the author reinterpreted biblical stories on analogous lines, initiating a trend that continues to this day. For example, von Däniken took the description of prophet Elijah assumed to heaven in a “fiery chariot” with horses in a whirlwind (II Kings 2:3-9) as the way a ninth century BC individual would describe a flying saucer, or the like, descending to earth and taking—even abducting—a human being out of this world. And here is the nub of our point. Elijah was widely believed in Jesus’s time to be the herald whose coming to earth would signal the “Day of the Lord” (Yom Jahveh) and the last judgment. So—taking the alien scenario as a framework—if a heavenly figure returned by alien spacecraft, then the Bible’s apocalyptic scheme could be interpreted as an eventual parousia of superior technology from outer space, constituting the New Age. Spiritual ideas were trans-placed by, and confused with, scientific technology. Very soon after von Däniken’s book appeared, earnest advocates, or “channellers”, for the “mission” of alleged “spacepeople” asserted they were coming to wrap up the mystery of human existence when, it was argued, our own technology had reached a stage when confrontation with “theirs” would not precipitate our wilting into aphasic terror and helpless awe.

Meanwhile, Kubrick’s astonishing 1968 movie 2001 A Space Odyssey suggested that even going to the Moon risked encounter with alien intelligence. The film’s climax turned psychedelic tripping through special-effects (colored lights) into a quasi-spiritual transformative experience, delighting audiences pre-oriented by chemical stimulants. 2001 directly attributed evolution of ancient civilization to alien contact . What is even more striking is how this whole quasi-religious scheme plugged in to popular ideas about U.F.O’s relating to fear of nuclear catastrophe: seeds powerfully planted in Robert Wise’s 1951 film The Day the Earth Stood Still . Thus, the Sixties “Peace Movement” acquired spiritual, apocalyptic dimensions. All that was required now was a celestial visitation and sanction. “Evidence” for such celestial interest could be sought in the mysterious archaeology of ancient civilizations, while “psychics” provided extraterrestrial messages of tedious consistency: peace and love; share and share alike; beware of the military-industrial complex! Repent ye, for the kingdom of God (or alien technology) is at hand.” You could have gotten the same messages from Top of the Pops.
Alien Role in Human Civilization

The issue of alleged alien role in human civilization was compounded by a prevalent suspicion that the Earth’s destiny was being secretly directed by supposed “hidden masters”, in the U.S. generally identified with secret government (the creepy 1967 US TV drama series The Invaders actually posited the secret takeover of government agencies by aliens indistinguishable from human authorities—aka communists—how’s that for calculated paranoia!). suspicion that government actually knew about aliens, but wasn’t telling us, fed directly into popular Belgian children’s visual storyteller Hergé’s next project, his penultimate “Tintin” adventure, Flight 714 ( Vol 714 pour Sydneyin the original French).
I well recall, aged eight, seizing on a fresh copy of this book in late 1968 from the shelves of the rather magical Victorian “Athenaeaum” private library in Melbourne, Australia, which my family used to visit on Friday nights, unaware that a launch party for the book in Paris in May of that year was prevented by the epoch-marking events of Parisian students taking to the streets in the name of revolution and anti-Gaullism.

Hergé’s story has Tintin diverted by criminals to an island south of Indonesia where he accidentally uncovers underground primitive temples whose enormous stone figures strongly resemble astronauts. Tintin starts receiving telepathic messages that draw him further into the labyrinth. Eventually he encounters a secret scientist, “Mik Kanrockitoff,” apparently a freelance U.F.O. scientist-enthusiast from the magazine Space Week, who is in mental communication with aliens and who explains how the ancient people of the island worshipped extraterrestrials as gods.