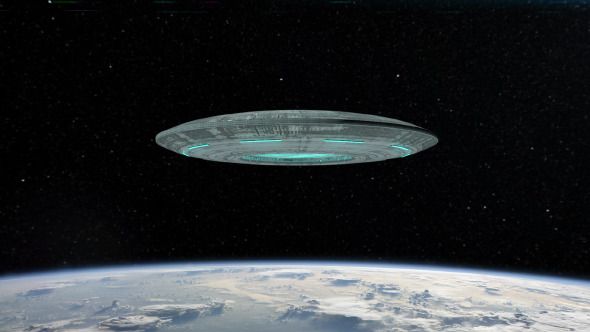 • In spite of disinformation campaigns, bad journalism, and infiltration by intelligence agencies into mainstream media outlets that try to convince the public through “an official campaign of ridicule and secrecy” that there is no such thing as UFOs, we know that they’re real. There is a plethora of credible sources – including documents, data, physical evidence, and more – suggesting we’re not alone, and that we have been visited by intelligent extraterrestrial beings from other worlds and possibly other dimensions.

• Garry McKinnon, for example, spent ten years in danger of extradition from the UK to the US for accessing nearly 100 NASA and military computers including the United States Space Command. On this government website, McKinnon found a photo of a large cylindrical shaped UFO hovering in space, a list of “non-terrestrial officers”, and logs of “fleet to fleet” transfers of materials. Is this evidence of a Secret Space Program using reverse engineered ET technology?

• Dr. David Clarke, an international investigative journalist who regularly comments on UFOs, said, “… the UK military were interested in capturing UFO technology… [and] were desperate to capture this technology… before the Russians or the Chinese got hold of it first.”

• In the US, these UFO investigative and research efforts are hidden within Special Access Programs which contain both unacknowledged and waived SAPs. Better known as ‘deep black programs’, these programs do not exist publicly, but they do indeed exist. We know that there is a black budget to fund these programs. A 1997 US Senate report described them as “so sensitive that they are exempt from standard reporting requirements to the Congress.”

• According to Herman Oberth, one of the founding fathers of rocketry and astronautics in the 1950’s, “flying saucers are real and . . . they are space ships from another solar system. I think that they possibly are manned by intelligent observers who are members of a race that may have been investigating our Earth for centuries.” “We have, indeed, been contacted — perhaps even visited — by extraterrestrial beings, and the US government, in collusion with the other national powers of the Earth, is determined to keep this information from the general public.”

• Former Chief of Defence Staff, Five-Star Admiral of the Royal Navy, and former Chairman of the NATO Military Committee, Lord Admiral Hill-Norton, said: “There are objects in our atmosphere which are technically miles in advance of anything we can deploy… we have no means of stopping them from coming here… there is a serious possibility that we are being visited and have been visited for many years by people from outer space, from other civilizations… This should be the subject of rigorous scientific investigation and not the subject of ‘rubbishing’ by tabloid newspapers.”

• There are literally hundreds of people with extensive academic, political and military backgrounds, all the way to astronauts, who have been blowing the whistle on extraterrestrial UFOs for a very long time. Many scientific publications describe radar-confirmed military sightings of UFOs by military pilots.

• The point is, if you believe some of these UFOs are indeed extraterrestrial, you are not alone.

The field of UFOlogy has long been muddled with disinformation campaigns and bad journalism, and sometimes this journalism includes infiltration efforts by intelligence agencies themselves. This is clear given the fact that intelligence agencies have a direct relationship with journalists and mainstream media outlets, as there are declassified documents showing so. Operation Mockingbird is a great example, not to mention all of the mainstream media journalists who have come out and said that mainstream media is directly influenced by intelligence agencies, governments and corporations. When it comes to UFOs, we know that they’re real, but we also know that along with that reality there has been “an official campaign of ridicule and secrecy.” (Ex-CIA Director Roscoe Hillenkoetter) Perhaps this ridicule campaign carries on today through some rather ghastly, unbelievable claims, but let’s not let that mask the fact that this phenomenon is indeed real, and there are a plethora of credible sources including documents, data, physical evidence, and more suggesting we’re not alone, and that we probably are being visited and have been visited by intelligent extraterrestrial beings from other worlds and possibly other dimensions.

A lot of this evidence has come from UFOlogist Richard Dolan, who has always been a key resource for me with regards to accessing credible information about the UFO phenomenon. I find that it’s important to seek out proper researchers who share information in a credible and verifiable way, especially about a subject that can so easily be ridiculed when you are trying to reach the masses who don’t have much knowledge about it, but are genuinely curious. I also feel that my generation of UFO researchers lack proper research and investigative skills, are easily influenced and swayed, and in the age of social media are simply trying to share whatever they can, no matter how credible, to simply ‘stay relevant,’ instead of doing it for the love and genuine desire to share important, truthful information.

Like I said, there are some rather ‘outside the box claims’ out there that have absolutely no credibility behind them, and to share those actually does more disservice to the movement, in my opinion. On the other hand, there are some very outside the box claims and information that do indeed have tremendous amounts of credibility behind them, and these are the ones we should be paying attention to.

One example comes from the case of Garry McKinnon, who for 10 years was in great danger of extradition to the United States for accessing nearly 100 NASA and military computers including the United States Space Command. This was the real deal, as Obama and the UK Prime Minister at the time revealed while fielding a question about Garry. This breach made headline news.

Gary was able to access these computers in real time and view files on them. He found some startling pictures, one in particular was of a large cylindrical shaped UFO hovering in space, in addition to a strange spreadsheet document with a list of “non-terrestrial officers,” presumably belonging to a publicly unacknowledged branch of the United States military operating in space, as well as “fleet to fleet” transfers of materials, whatever that means.

Is there a secret space program, and have clandestine groups been reverse engineering ET technology?