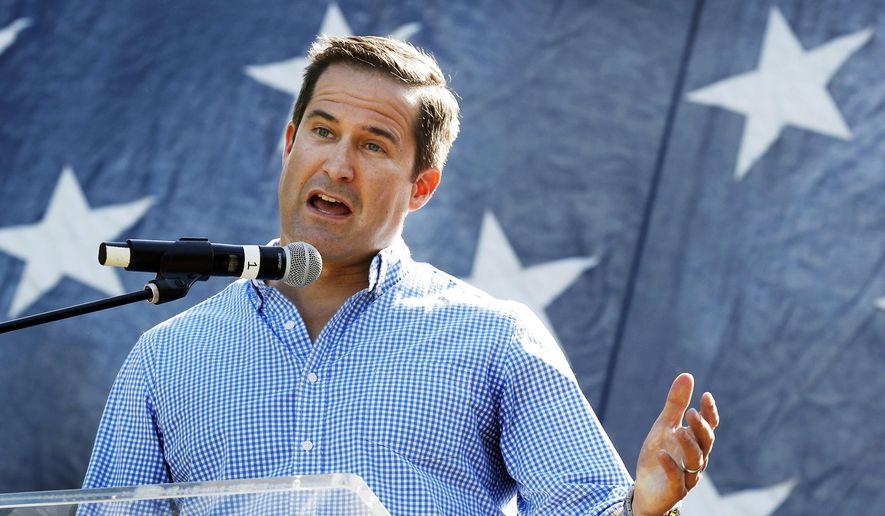 Newest US Democratic Candidate Says He Won’t Build a Wall, Even If Mars Attacks

• Rep. Seth Moulton (D-Mass, pictured above) is the latest Democrat to announce his candidacy for President of the United States in 2020. On Buzzfeed’s AM2DM podcast, Moulton indicated that he would run on the issues of the evilness of Russia: “the only country on earth that can literally wipe out all life in America”, and heightened national-security. (Are we sure that he is a Democrat?)

• When the hosts asked Moulton what he would do as President in the event of an alien invasion, Moulton was apparently uncertain whether the aliens referred to were illegal immigrants or extraterrestrials. So Moulton covered his bases by replying that he would emphasize diplomacy over ‘weapons or walls’. “I would not build a wall between here and Mars,” said Moulton. “What I would do with this alien is I’d give him a classic American meal. I’d serve a beer and a burger. . .If the meeting starts to not go so well, I’d say, ‘by the way, that burger, those were the last aliens who visited’”.

• [Editor’s Note]  In a single podcast, Democrat US Representative Moulton managed to ‘alienate’ both anti-war liberals and Mars’ extraterrestrials. So much for Moulton’s Presidential campaign.

A Democratic congressman joining the jam-packed 2020 US presidential primary field has assured voters he’ll use diplomacy, not weapons or walls…to combat an alien invasion. Finally, a candidate who cares about the issues!
“I would not build a wall between here and Mars,” Massachusetts Rep. Seth Moulton told the hosts of Buzzfeed’s AM2DM podcast, who asked him what he would do if he was president during an alien invasion.

New 2020 candidate (and Bill Pullman lookalike?) @sethmoulton on what he would do if he were president during an alien invasion: “You gotta start with diplomacy.” 👽 pic.twitter.com/H1RFaXB7Ps
— AM2DM by BuzzFeed News (@AM2DM) April 22, 2019

“You’ve gotta start with diplomacy,” Moulton continued, glossing over the mix-up of his immigration and national-security soundbites. “What I would do with this alien is I’d give him a classic American meal. I’d serve a beer and a burger. . .If the meeting starts to not go so well, I’d say, by the way, that burger, those were the last aliens who visited,” Moulton concluded.

Even the hosts admitted Moulton faces an uphill battle for the nomination, joking that the top questions their audience wanted to ask him after he announced his candidacy Monday morning included, “Why?” and “Who is this guy?” At last count, there are over 20 candidates vying for the chance to wrest the presidency from Donald Trump – whom Moulton, like many of his competitors, ironically calls the “most divisive president in American history.”